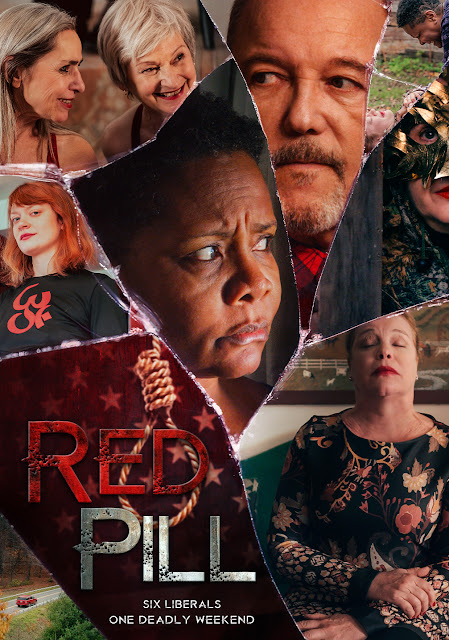 A spooky news round-up today as it is now officially Halloween month. and starting with some news of Acort International films available for international acquisition. Red Pill is described as a political horror. Directed, written, and produced by Tonya Pinkins (who also acts in this), it is about a group of progressives who head to the south of America to canvas for votes for the 2020 U.S election. Things don't work out well at the place they have rented and soon find themselves under attack by a rich white supremacist cult.
Harvey is a 'suspenseful comedy' that is about the titular Harvey who wakes up after a night of drinking to discover a man murdered by bowling ball in the lobby of his former workplace (obviously a bowling alley). This stars Darius Autry, Allison Meister, Johnny Alonso, Brin O'Brien and Andrew Rogers.
Finally is Lockdown: 2025. I never know what sort of audience films that are inspired by the events of the past year or so will find. Regardless, in this one a family are trapped at home after martial law is declared due to a highly infectious virus. They find themselves facing danger from both outside and within the family home.
Other notable Acort horror films include among them The Box, The Connection, Death of a Ghost Hunter, Bleeding Hearts and Dead of the Nite.
Posted by Daniel Simmonds at 04:05