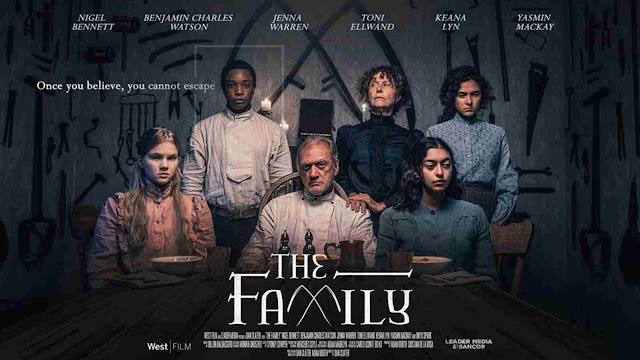 The Family is a psychological thriller that was directed and co-written by Dan Slater (Newborn). The central premise is something that I have definitely seen in other films, one in particular this had startling similarities to, yet frustratingly I can't reveal the name of that film. This is due to the fact that The Family holds a twist, a twist that I feel is purposely obvious to the viewer as within minutes of this opening I guessed exactly what it was. Where this film excels over the other much more well known one is that The Family exceeds expectations with fantastic atmosphere and a very competent cast of actors.

In what seems to be the early 1800s, a family live. Mother (Toni Ellwand - The Handmaid's Tale) and Father (Nigel Bennett - The Shape of Water) and their children, mute Evelyn (Yasmin MacKay), Elijah (Onyx Spark), feisty Abigail (Jenna Warren) and conflicted Caleb (Benjamin Charles Watson - The Killing) live on land surrounded by a magical boundary made out of bones. The children are told that some sort of apocalypse has happened, they, as worshipers of a God they call Etan were spared the fate of the rest of mankind who fell to the demon Abaddon. Life is harsh and cruel for the family, and after Elijah is banished as punishment for being too exhausted to work the land, Caleb starts to have doubts about the teachings that Father speaks of. The arrival of an outsider, a girl name Mary (Keana Lyn), brings a change in the dynamic of the family that sees the children slowly start to get the courage to rebel against the perceived truths of their world.

The Family feels like a cross between the film that shall not be named and The Witch. The later had a supernatural aspect to it that remained unconfirmed for much of the run time. Here, like the faith Mother and Father expect their children to have, the supernatural element is never confirmed. All the members appear to believe in Etan, and the children are very afraid of crossing the boundary of their land. The horror comes from the harsh life they are forced to experience. If Etan does exist he is a cruel God who expects tireless toil to be appeased. This God is meant to be a kind one, but this runs counter to how the parents, Father in particular, act. This is where some of the great acting comes in. I loved the dynamic between Father and Mother, the off hand comments they say to each other. While Father is the dominant antagonistic force in the film, there are moments where it seems that Mother was the one who changed him into this cruel person. There isn't a lot of dialogue and that makes this into a slow burn. This however is slow burn done well, unlike something such as The Secret of Sinchanee that became boring by dragging out events. Here there is enough fed to the viewer to make this almost entirely engaging.

Rather than follow a three act structure this is instead split into seven different chapters, the story of the movie occurring over several months. For a lot of this the focus is on Caleb and the parents efforts to break his will. Watson was fantastic in this role, with barely any dialogue he acts without words for the most part. The defiant and defeated looks, the misery, anger and sorrow he is able to display was fantastic. Each chapter has a definite arc to it with notable events that both build on what has come before as well as feel like they are of the chapter they appear in. Towards the end I felt they almost dropped the ball with Caleb, his character arc was building up only to be knocked down and the protagonist role moved to a different character. This was likely on purpose but it did lead to some frustration with a roundabout way that the story would be leading up to something and then would slowly revert back again, only finally reaching its crescendo in the finale.

The world of the film is sparse but is fit for purpose. The only locations are the small farmhouse, the even smaller chapel, the fields and the surrounding woodland. This was filmed very well, but it also seemed a little bit too darkly lit at times. It all felt authentic, and this goes down to the old fashioned way that all the characters speak. I enjoyed the visible cracks that show to the viewer almost right away, from the sound that Abaddon makes, to the hidden shed beyond the magical boundary, all these were little hooks that kept me wanting to see how the plot would turn out. Keeping with the sparse nature are the special effects that are minimal, and a soundtrack that kept the tone going, even if it seemed typical for horrors set in this particular time period.

The Family's success depended so much on its small cast. The whole story revolves around the connections between the family members, so it was good that these all had so much life to them for the most part. I have happened to see a lot of films that focus on cults lately and this was another strong entry, it was filmed during COVID and so parallels between lockdowns and isolation are easy to make with this. The Family had its world premiere on October 8th at the Busan International Film Festival.