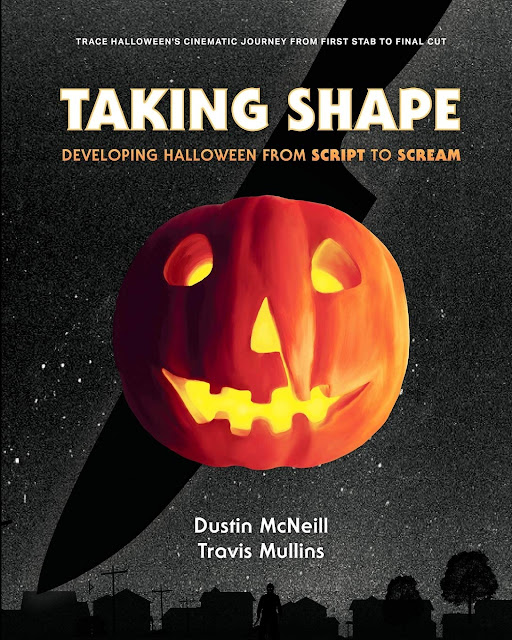 When I first heard of Taking Shape I knew it was something I needed to own. To give the book it's full title I should also include the line underneath 'Developing Halloween from Script to Scream'. Of course from that it should be obvious this explores the history of the Halloween films, I was pleasantly surprised to see it even included a section on the latest Halloween film (Halloween Kills wasn't out in 2020 so obviously that is not a part of this).

Taking Shape covers all eleven currently released films, so Halloween, Halloween II, Halloween III: Season of the Witch, Halloween 4: The Return of Michael Myers, Halloween 5: The Revenge of Michael Myers, Halloween: The Curse of Michael Myers, Halloween H20: Twenty Years Later, Halloween: Resurrection, Rob Zombie's Halloween, Rob Zombie's Halloween II, and Halloween 2018. Each film gets its own chapter that falls into a familiar pattern that made this easy to read book a joy. Starting off talking about the creation process behind the film, usually with tales of woe, it then provides a plot summary. This last part became more interesting as not only are the theatrical plot summaries given but also other versions that may exist, such as Rob Zombie's director cuts. Following on from this there is a look into the most notable deleted and alternate scenes as well as changes and extra dialogue that only ever existed on paper. It then ends with one or two interview with key people who worked on the film, and finally, a page of quotes from film critics at the time for each movie.

I am a gigantic fan of this series, even though the zombie genre is my favourite, if I was forced to say what I though the best horror film of all time was I would say the original Halloween. As one of the interviewed people say in this book, Halloween isn't just a classic horror film, it is a classic film in its own right. Slashers to this day borrow ideas from this, and without it Friday the 13th, A Nightmare on Elm Street, Scream and countless others just would not exist in the form they do. As many will know, the storyline is a bit of a mess in that there are now five different realities going on throughout the eleven movies. My personal favourite was the original timeline that brought together the first six films (excluding Season of the Witch in which Halloween just exists as a film). My least favourite was H20: Twenty Years Later that just felt like a poor copy of Scream. I'm getting off point, needless to say, it was fascinating to read all the behind the scenes decisions that led to how the various films turned out. Whether it was the huge problems The Curse of Michael Myers faced (problems so bad that the movie's director, Joe Chappelle has refused to ever talk about this film in an interview!), or the frustration's Rob Zombie had of his vision constantly being diluted by studio interference, and the reasons why he returned for a sequel after the bad time he had making his first one.

It is hard to see what a non-fan of the series would make of the book. It is extremely easy reading, helped by a large book size. The 377 page book may not include any photos but it is full of simple silhouette shapes that fit whichever movie the chapter they appear on is about. I would say that occasionally it can all get a bit confusing reading the plot summaries, especially when more than one is given. I knew what the films were like, but I don't know if someone who had never seen them would be able to decipher what they were about. As a fan though this book really hit the spot, so much so that I have a really strong urge to watch through all eleven yet again. There is actually a sequel to this, Taking Shape II: The Lost Halloween Sequels, this one as the title implies has a much deeper look into the various pitched Halloween sequels that never got made. They are all referenced in Taking Shape but I imagine they would be greatly expanded in this second book. I had an absolute blast reading this book, endlessly entertaining, and even the interviews were riveting. I usually find reading interviews as dull as dishwater, it's why I don't often include them on my blog, but these ones were full of insight. I loved how the interviewer remains ever neutral despite having obvious opinions on the movies. If you have even a passing interest in the Halloween series then this is an essential book to read.