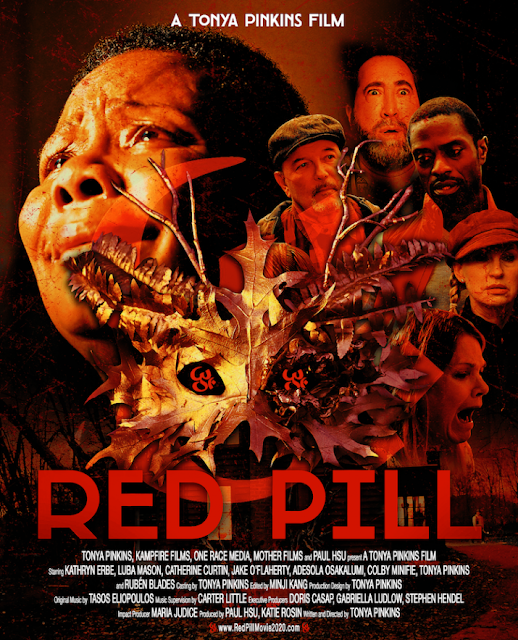 Red Pill describes itself as a political horror, something that I couldn't quite picture in my mind. I was happy to get a screener of this to check it out for myself. This was written and directed by Tonya Pinkins who also had a starring role here. Horror films directed by woman are much more rare than those directed by men, even more so to have a horror film coming from a black woman. I was interested to see what a feminine spin on the genre could produce.

Taking place in the run up to the 2020 American elections, this follows a group of friends who have headed deep into a 'red' state in order to canvas homes for votes. These friends include among them Cassandra (Pinkins), her boyfriend Bobby (Adesola A. Osakalumi), Rocky (Rubén Blades - Fear the Walking Dead), his wife Emelia (played by his real world wife Luba Mason), as well as spiritual Lily (Kathryn Erbe - Law & Order: Criminal Intent) and jokester Nick (Jake O'Flaherty). They have rented a house from which to base their operations but immediately things seem off, with Cassandra in particular getting bad vibes. These uneasy feelings are warranted, it turns out the house they are staying at is full of hidden cameras from which a strange urine drinking female cult of white supremacists watch, biding their time to strike at the group. 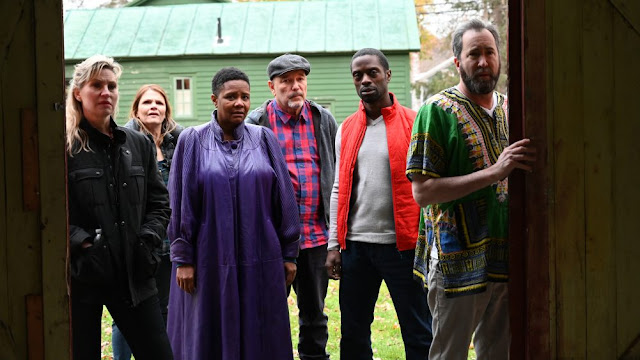 There were elements of Red Pill that worked and there were parts that didn't work as well. From a technical viewpoint there are some truly awful looking CG effects on display here. At one point a burnt corpse is on screen, it looked terrible, but rather than use a minimal shot to hide this it is instead on display for a full ten seconds or so. In another moment a whole bunch of insects are found to have gotten into the house, again these looked really bad and super imposed. I would have cut their inclusion entirely as it ripped me out of the film's story completely for a moment. Everything involving the CG was bad here, the effects used to simulate the hidden camera footage included. Luckily there are also some practical effects used here, these fare much better, the best looking effect coming from a character who gets shot with arrows.

I admit to not knowing a lot about American politics other than what I have seen on the news. Here it is heavily implied this female cult are on Trump's side of the political divide. They are after the group due to their differences, as they are made up of black characters, immigrants to America, as well as progressives who want a positive change to the country. Unfortunately none of the protagonist were likeable, they all had weird interactions with each other that made their friendship not feel real, and the politically incorrect jokes of Nick were all terrible. With an obviously evil and twisted cult hunting them it would have been nice to be able to root for the protagonists, rather than find their general behaviour off-putting. For the cult, it was refreshing to have an all female group of antagonists, but it was a shame that to my knowledge they don't really speak. They do turn up in some trippy sequences, a nightmare scene that Cassandra has where they are dressed like lions, and a bizarre dance sequence where they are all dressed up in camouflage and wearing bird masks. For the most part Red Pill is happy to leave these antagonists relatively unseen, it isn't even until the end of the final act that the two sides eventually meet face to face. 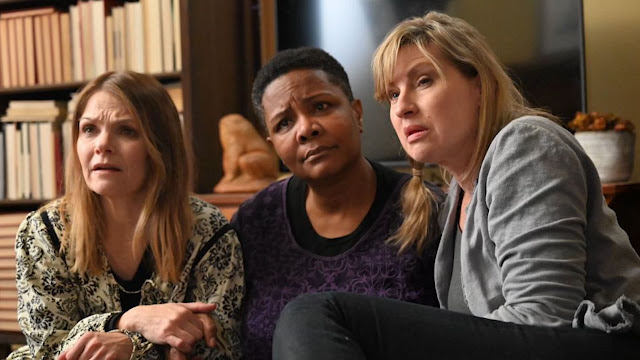 The IMDB page describes this as a horror comedy, I guess I can see that but it is not overtly one. The tone is fairly light even when the characters are in deep peril, such as the usual film way of characters not really acting like they have lost loved ones when people are killed off. This comedy element maybe plays into the really surreal epilogue. It felt like the mask the film had been wearing slipped off here, it devolved into a very strange finish that had lots of laughter that felt either directed at the viewer for subverting their expectations, or a manic kind of despairing laughter at the state that the states has become? I can't help but feel if I had been more clued into American politics this might have possibly felt more relatable, as an outsider it was just bizarre. Horror used as a mirror for social issues can be very effective. It could be argued the protagonists are meant to be annoying, Nick for instance is full of insensitive jokes, while his attire suggests cultural appropriation.

Red Pill as a horror got some parts right. There is a steady ramping up in the terror the group faces, and the practical effects were competent. With a more likeable group of protagonists and more screen time for the antagonists this would have fared a bit better. Perhaps there is some deeper meaning behind this enemy never showing their faces however. There is enjoyment to be found here if you look for it.