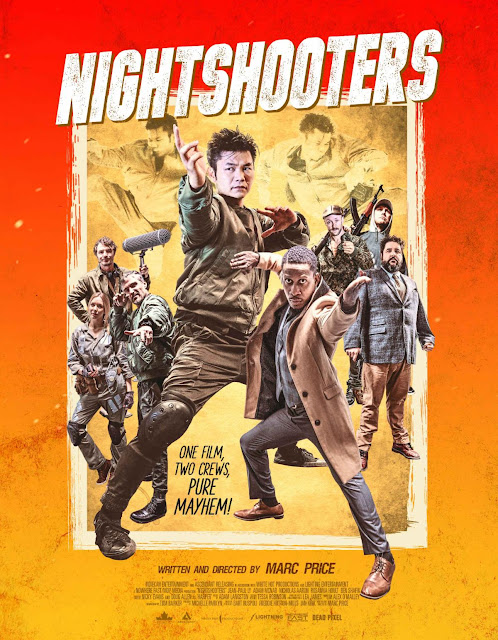 This past week or so my inbox has had an influx of films sent to me for review. An annoying habit of mine is to request screeners even when I am already swamped. I was on the fence briefly about Nightshooters, it sounded very much like an action film. It is also however a thriller, albeit a comedic thriller, and that gave me the 'in' to accept it could fit on my blog. Interestingly enough this was written and directed by Marc Price, his very first feature length film, Colin was one of the first films I reviewed on this site.

An indie film crew are in a derelict office block filming Dawn of the Deadly, a low budget zombie film. The crew include the angry director (Adam McNab - The Summoner), stunt guy Donnie (Jean-Paul Ly), special effects guru Ellie (Rosanna Hoult - Captain America: The First Avenger), sound technician Oddbod (Nicky Evans - Shameless TV show) as well as a few others, including the movie's leading man, the diva like Harper Partridge (Doug Allen - Band of Brothers TV show). In a case of wrong place at the wrong time, just across from the group in another derelict building are a group of gangsters, led by the bear like Tarker (Richard Sandling - School of the Damned), who are there to carry out a brutal gangland killing. The gangsters realise too late that not only where their actions accidentally witnessed by the film crew, but that they also happened to have caught it all on tape. In desperation, Tarker orders his men to storm the office block with the aim of wiping out all the witnesses. With the building scheduled to be demolished the next morning, the film crew must find a way to escape both their attackers and building by dawn. 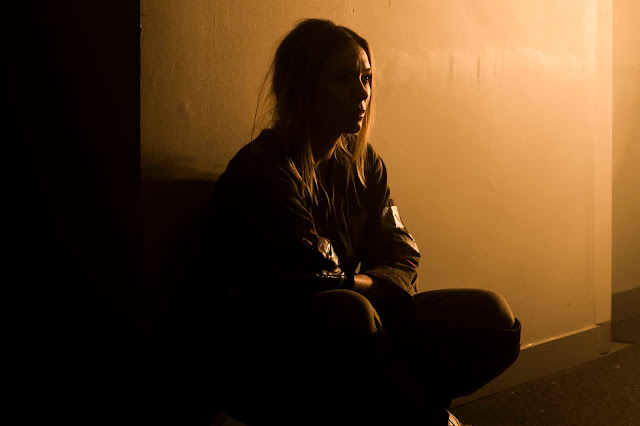 Watching this it reminded me of a few things. The biggest feeling was that this was like a cockney version of Die Hard. Instead of an off duty cop you instead have a panicked film crew. It turns out this was actually one of the influences for Nightshooters, a scene set in an air duct specifically was designed to look like a scene from that action flick. There is a very British style of humour with both sides of the conflict constantly insulting themselves throughout. While this can be quite dark (such as a violent scene of a captured female character getting repeatedly punched in the face) this also borders on a comedy, and that is mainly due to the antagonists. These antagonists are like a more deadly version of the 'Wet Bandits' from Home Alone. Most of this group of shown to be wildly stupid, and it is this stupidity that leads to a lot of the moments of them underestimating their enemy, as well as accidentally causing at least of couple of their own deaths.

With the plot point of the building being rigged to explode in the morning it creates a reason why most of the action scenes here don't involve guns (for fear of setting off the explosives dotted around the place. Instead there is lots of close quarters fighting. Donnie in particular almost felt like he was in a different film to everyone else. Due to being a stunt man he is actually very proficient in marital arts and leads to lots and lots of scenes of him using these skills on the antagonists. With Tarker bringing in martial arts experts of his own this leads to plenty of very well choreographed fight scenes. These were superbly edited and had lots of high energy, fast paced fights. My only problem with these is that there were almost too many of them. It was always inevitable that any time Donnie encountered an enemy it would devolve into a protracted martial arts battle. I did like how the film crew all used their specialist skills in order to survive. The sound technician has listening devices placed around the building so he can keep track of the gangsters, The special effects member is able to use the explosives dotted around the building to her own advantage, as well as create makeshift weapons such as a bottle gun. Even the highly strung Harper is able to use his acting skills to feign death in a gross scene where his 'corpse' is being urinated on. 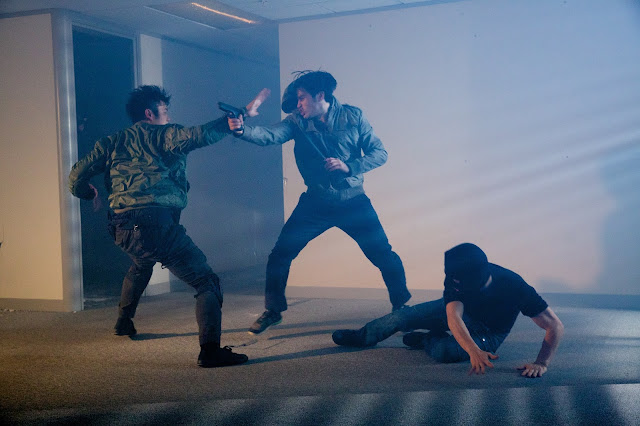 Many of the practical special effects are good looking, I recall a scene where a shard of glass is being pulled out of a hand, that looked pretty gnarly. It was the CG effects that didn't fare so well. They certainly weren't on the level of Red Pill thankfully, but it was always obvious when CG had been used rather than physical effects. These mainly are restricted to some of the larger explosions, plenty of blood spurts, and an acid type substance eating through someone's face. There is lots of violence mixed in with the action, some of which was not feel good. The humour balances this out though, I liked a part where a gangster had a large urn of apparently burning hot tea poured over him, his screaming is then revealed to be due to the water being freezing cold as opposed to hot, which fed back into an earlier scene. The comments of the gangsters were always amusing. Tarker was mostly a good main antagonist, coming across like a typical Nick Frost character, but evil. He never really gets to actually do much more than shout and swear at his goons, a few times he gets to shine but he still felt slightly wasted.

Nightshooters was plenty violent and plenty thrilling. The plot itself did become a little predictable, while the location of an derelict building meant there wasn't a lot visually to marvel at. This was an enjoyable indie thriller that I found to be worth a watch even if it might not deliver an urge for repeat viewings. Nightshooters comes to Digital HD and Cable VOD on November 2nd across North America from Indiecan Entertainment.

Posted by Daniel Simmonds at 13:52