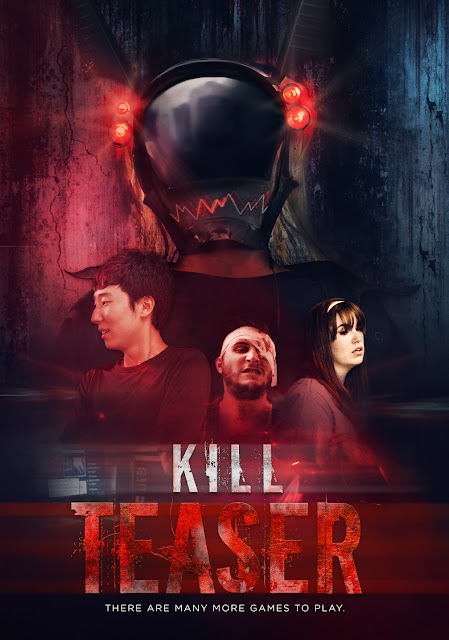 While IMDB doesn't describe Mb X. McClain's feature length debut, Kill Teaser as a comedy horror, it just has to be. Its story is so bad that it has to be a joke. Even as a comedy film though this wasn't very pleasant, especially with the horrific treatment of one of its characters.

Supposedly based on true events, this follows a layabout teenage boy who calls himself 'The Studier' (Tobee Paik - You're Not Alone). This boy is obsessed with a mysterious killer, 'KillTeaser' (Charlie Liao) who murders his victims live online. In awe of this edgelord, the boy reaches out in order to become his student. Meanwhile, the waitress (Laurie Riihimaki) at a local diner that the boy is obsessed with starts up a toxic relationship with trucker 'Hot Freakin'' (Dylan Porteus).

Things went south almost straight away once the boy meets KillTeaser. It looks like the entire budget went on the Anime style mask that the killer wears. It has red lights around it, and a long white wig attached to it. When the killer gets angry the jagged mouth on the mask lights up and lens flares start popping off the lights. This mask was hands down the best thing about this movie. KillTeaser is the ultimate edgelord, forever going on about how love is a lie. His voice is heavily distorted, a cool effect, though occasionally I found it hard to make out what he was saying. The look is somewhat ruined because the killer appears to be very small, even the boy is a lot taller than him. This killer is made to look painfully cool in a way that makes him seem ridiculous, walking around with his black trench coat, even in broad daylight no one bats an eyelid at his cosplay costume.

The second best thing about Kill Teaser is the performance of Porteus as Hot Freakin'. The actor is a young adult yet he plays the part of a fifty year old trucker amazingly, I would go as far to say his was the best performance of a redneck trucker I have seen committed to film. He has a soft southern accent and a way that he looks that makes it seem like he really knows what is up in life. It's a shame he is in the film's most terrible storyline. I imagine it was played for laughs but on his first date with the waitress he rapes her, only for her self confidence to be so low that she agrees to go on a second date with the walking caricature the very next day. This was just an unpleasant side story and a very poor representation of females, especially in modern day. It felt like a remnant from an edgy high school student's fantasy from the early 2000s.

The special effects really are special, I especially found the superimposing of CG signs on shop storefronts, such as the corner shop that is made to look like an over the top sex shop, and a building that has fire effects superimposed over it to make out that its been blown up. Sadly this comedic CG also applies to the blood effects, CG blood spurts hit the camera, while the bluntest prop knifes I've ever seen have their inflicted damage disguised by this artificial looking blood. The general outline of the story, an Anime feeling lost teen who idolises a depraved killer was ok, but it never really had much to it. KillTeaser never looks anything more than a try-hard, his constant empty threats reduce any impact his cool mask might have had.

The one thing Kill Teaser has going for it outside of Hot Freakin' and the mask is that it was certainly not boring. Poorly made, poorly acted and with some outdated plot points, this saved itself from complete damnation by never taking itself as seriously as it might want you to believe. Kill Teaser is available now from Midnight Releasing.