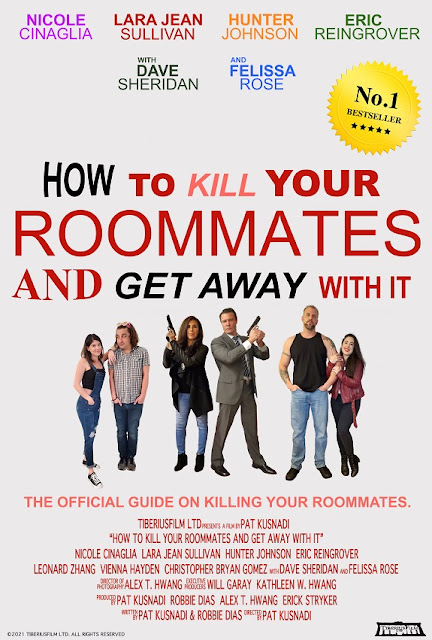 How to Kill Your Roommates and Get Away with It is the feature length directorial debut of Pat Kusnadi, who also wrote this along with Robbie Dias. Due to the structure of the film this almost felt like a time loop thriller, albeit one with comedy built into its storyline. The comedy versus thriller didn't always go together well, leading up to a finale that jettisons the humour in lieu of drama.

Ellie (Nicole Cinaglia - Paranormal Attraction, Camp Dread) is reaching the end of her tether thanks to the roommates from Hell in the form of her former friend April (Lara Jean Sullivan - Ugly Sweater Party) and her misogynistic meathead boyfriend, Clyde (Eric Reingrover - The New Hands). When her best friend, easy going Jacob (Hunter Johnson - Ugly Sweater Party, Irrational Fear) jokingly suggests he helps her kill them, she decides to take him up on his offer. 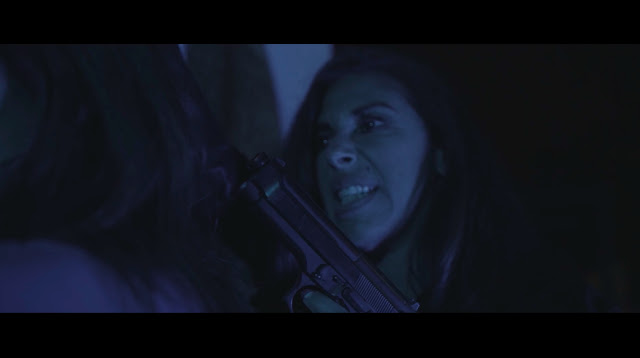 The film starts off light enough with the films first act having Jacob and Ellie at a diner. As Ellie recounts all the reasons why she cannot stand her roommates, flashback sequences play out showing her reasons in greater detail. When Ellie reveals her drastic plan this leads into a second act that is a series of possible 'what-ifs' with the various attempts Ellie and Jacob have on killing the duo. Because of this I found it difficult to really work out what was real and what was fiction. When the plot begins in earnest I was left half expecting at any time for the time to reset again, this made it hard to fully get into the spirit of the movie. The core four cast members were well chosen. The animosity that Ellie, April, and Clyde had felt believable enough that it reminded me of my younger years when I was living with a couple in a vaguely similar situation. It helps in making it seem that Ellie really could be wanting to kill them. There is a small group of actors here and that compliments the short seventy minute run time. Along the way there is a small scene that features iconic horror actress Felissa Rose (Camp Twilight, Sleepaway Camp) and Dave Sheridan (Scary Movie), with them giving purposely over the top performances, and one small but nicely done scene involving a character played by Christopher Bryan Gomez (Streets of the Dead).
By the time of the final act all this comedy has left the film, it gave a strange change in tone that never felt well implemented, leading to an unexpectedly dark finish.

Due to the various comedic what-if scenarios there was quite a lot of murder and mayhem, including some nice looking stabbings and plenty of blood. Some of these fight scenes were not that badly choreographed. With a lot of the scenes taking place at night the later parts of the movie were quite dark, I caught myself at one point thinking it had actually turned into black and white footage due to how saturated the picture looked.

How to Kill Your Roommates and Get Away with It never stuck around long enough to get tiring, it was an enjoyable comedy thriller, if a little limited in its story. Personally I thought the decision to drop all hints of humour in the third act didn't work that well as it created a jarring effect. The film had its world premiere at the Silicon Beach Film Festival earlier this month.

Posted by Daniel Simmonds at 04:11