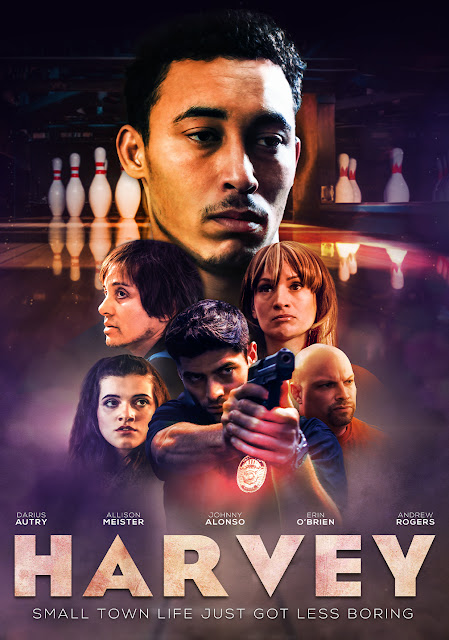 I reserve a space in my decrepit pit in which 'real life horrors' are always welcome. This sub-genre of thrillers involve a typically normal person committing a crime and then doing their best to cover it up, with guilt inevitably grinding them down. Harvey is one such film, even if it does things slightly different. Co-directed by Johnny Alonso (who also plays one of the principal characters) and Ranelle Golden (who also co-wrote this with Shawn Golden), this small town thriller takes a long time to get going.

Harvey (Darius Autry) works in a bowling alley in a small American town. He hates his job, hates most his co-workers and hates the regulars, especially John Snyder (Kevin Winn) whose unwelcome attention to the only co-worker he gets on with, Madison (Allison Meister) has riled him up. One night John tries to force himself on Madison, she is saved by the bowling manager, Keith (Alonso) who inadvertently kills the man. Keith convinces Madison to help him hide the crime to which she grudgingly agrees, but not before Harvey passes by blind drunk and sees the corpse. Now with John reported missing all suspicion falls on Harvey as it was known how much he hated John. Having blacked out during his drinking binge, and with fragmented memories of having seen the body, Harvey begins to suspect that he may have done something terrible during his missing hours.

Unfortunately the first act of Harvey is also its must dullest. It is nearly forty minutes into the hundred minute movie before the actual crime takes place. Before this we follow Harvey and the other characters through two days at the bowling alley. It is here where it is hammered home that John and his buddies are not good people, and Harvey's misery he feels at his life. I understand this needed to happen to flesh out the characters but I don't see why two days were needed to show this rather than one. The second day is a rehash of the first, different things happen, but it is still Harvey and his bad attitude versus the bowling trio of John, his mistress Karen (Erin O'Brien), whose character lives up to her namesake and Randy (Irv Becker - Vampires: Rise of the Fallen). Thankfully, while I could never forget the slow start, the rest of the movie fares better. It was interesting to have the actual perpetrators of the crime sat in a subplot, while the innocent person gets the limelight. Harvey was a hard character to root for, I never really understood what set him apart from everyone else. As a co-worker states, its not like everyone else working at the bowling alley loves their jobs, they hate it as much as he does. With an alcoholic mother and a missing father that gives some explanation, but the biggest feeling I got was that Harvey was just a bit self pitying.

Around the edges of the film there were some interesting moments, especially when it comes to the character of Jack (Richard Cutting - House of Cards TV show). This homeless war veteran is the most positive person in Harvey's life, though it is also suggested this character could entirely be a figment of Harvey's mind, it is never made clear which is the case. There was also a good rapport between Harvey and his mother, Anita (Eliza Kelley - House of Cards TV show). The two are quite antagonistic yet clearly love each other despite their issues. Feeding on the guilt characters feel is something I enjoy about this types of films, I am quite empathetic so feel this guilt by proxy. Relegated to a subplot these side characters never get too much time to be remorseful, until the third act that got a little bit silly.

After a slow start Harvey improved steadily. The stakes may be low and the protagonist might be a bit whiny, but I found myself getting more into the small town vibe, there were a few decent side characters who added flavour to this thriller.