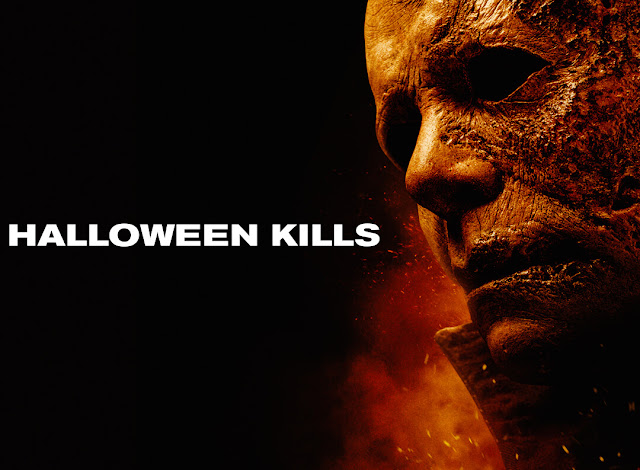 I feel like I was one of the few people to get a vague sense of disappointment with 2018's Halloween. Initially upon leaving the cinema I was full of praise, but it had its issues. I guess chief of which is that I just do not like the character of Laurie Strode. This stems from Halloween H20: Twenty Years Later which in my opinion is the very worst in the entire series of films. I also didn't like the glut of comedy characters that appeared, especially ones who encounter Michael Myers and survive whilst wisecracking the whole way. Halloween Kills (again directed by David Gordon Green) fixed both these problems, and the title is very fitting as from films start to films end the Shape is on a seemingly unstoppable rampage. Spoilers for the first film unavoidably to follow.
This picks up immediately after Halloween with Laurie Strode (Jamie Lee Curtis - Halloween), her daughter, Karen (Judy Greer - Halloween) and granddaughter Allyson (Andi Matichak - Halloween) fleeing Laurie's burning home on the back of a pick-up truck. They are dismayed to witness fire engines racing to the property to put out the blaze. They end up at the local hospital where for a time they believe they have finally killed Michael Myers (James Jude Courtney - Halloween as well as original Halloween Shape - Nick Castle). Meanwhile the fire crew discover a nasty surprise waiting for them in the basement of Laurie's home, Michael had managed to escape the blaze and is non too pleased. Starting with the team of firemen, he begins a trail of destruction across Haddonfield. The townspeople, led by original survivor Tommy Doyle (Anthony Michael Hall - The Dark Knight), feeling let down by the inadequate police response to the unfolding situation, set out in armed gangs to find and kill Myers, the mantra being "Evil Dies Tonight!". 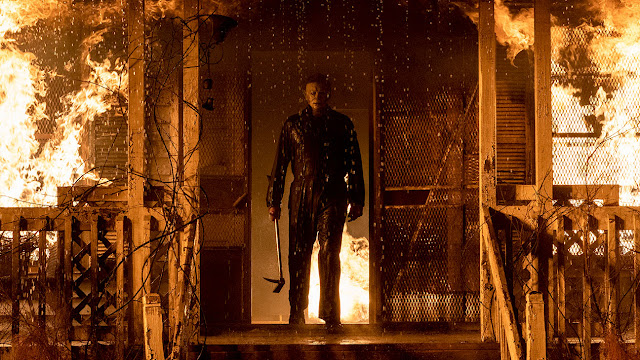 It seems Halloween Kills may be the Marmite of the Halloween series, people seem to absolutely love it or really hate it. If you want a complex story with plenty of character development I could see this not being your favourite entry. However, if like me you want Michael Myers doing what he does best then this will indeed be for you. Halloween II, like this sequel, took place on the same night as the film that came before it. With that one however it was almost like a reset as the flow of the movie slowly built up again. This is a proper continuation, despite the trauma Michael endured (including losing several fingers, being shot in the jaw and stabbed in the shoulder), he is more deadly as ever. This is brought home to the viewers in the first standout scene. He emerges from the burning house to face a whole team of firefighters, most of them armed with fire axes, one even has a circular saw. In a brutal sequence he butchers the whole lot, fire axes get imbedded in faces, the circular saw gets turned onto its owners head, and Myers even imbeds his weapon in one poor firefighter before lifting the guy up in the air nearly one handed! This sets the standard that the rest of the movie follows. He racks up quite a body count, all of these victims are brutally dealt with. Memorable highlights include a kitchen knife stabbed into an eye socket, a 180 degree neck snap and a beautiful edited sequence towards the end that is full of close-up almost slow motion shots and somehow wonderful cinematography.
Before all that begins is perhaps my favourite part. It was a sequence that I was totally unprepared for, and that is that rather than pick-up outright we are instead whisked back to 1978 and get to see the aftermath of the original Halloween. With film grain used to replicate the look of the original we follow both Myers (Airon Armstrong in the flashback) and the police, with this detailing how he was eventually apprehended. This both gives more details on an event spoken of by Officer Hawkins (Will Patton) in Halloween and even better gives us more Dr. Loomis! Tom Jones Jr. who plays the doctor here looked so like him that I assumed it was clever CG that put original actor Donald Pleasance into the film. The same can't be said for the voice provided by Colin Mahan, he tried his best but it was jarring to hear this voice coming out of a familiar face. All of this attests once again that this new trilogy is a pure love letter to fans of the franchise. Backed up this time around by a whole bunch of actors reprising their roles and a bunch of characters returning. Obviously Curtis and Castle are back, but they are joined by yet more actors from the original horror, Charles Cypher reprising his role as Leigh Brackett, Kyle Richards as Lindsey and Nancy Stephens as Marion. 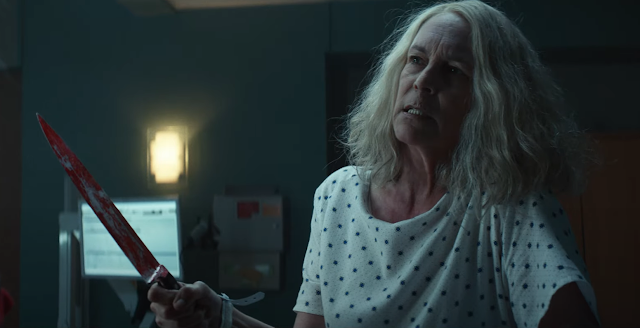 These characters may be fan service but they also play into a theme of Halloween Kills, that Michael's evil infects everyone he comes across. All the survivors of the original 1978 killings had their lives irreversibly changed by coming into contact with the soulless killer. A large subplot here is the townspeople coming together in order to defeat Myers, but this takes the form of a chaotic and mindless mob who in their frenzy make some dark mistakes. The whole hospital subplot felt almost entirely removed from Myer's story but it really expanded on ideas present in Halloween II (mistaking an innocent man for being Michael Myers) and forming a mob to take the law into their own hands (Halloween 4: The Return of Michael Myers). These ideas are really fleshed out here, with more attention dedicated to them.
The issues I had with the 2018 movie are both fixed here. First is that Laurie finally comes to understand that the movie doesn't revolve around her, Myers has as little interest in this character as any other, he merely destroys anyone who gets in his path. Secondly is that this is a darker film with less humour and less comedy characters. The jokes here are jet black with more than a few revolving around the kill scenes (such as a character making a one liner just before they shoot Myers only for them to realise their gun is empty). Weirdly, perhaps my favourite two new characters are comedy ones. They are gay couple Big John (Scott MacArthur) and Little John (Michael McDonald) who have the unfortunate luck of living in the old Myers house. These characters worked due to the chemistry they share, you get a real sense of love between the two men, they were some of the only people I really cared out what happened to them. It helps they get to share a few scenes before they encounter the killer. As for Michael, he is simply on fire here, I don't think he has ever been represented as such a threat before. His look is made tremendous by the fantastic lighting that shows him in such a way that the eye holes on his mask are black pits. There is even a long section where he is walking around without his iconic mask, the lighting forever keeping his face obscured in shadows. It really was so wonderfully shot.
As you can probably infer my this fan boy review, Halloween Kills is everything I have ever wanted from a Halloween movie, this is a firm stamp on why he is the best movie maniac of all time, the prime example of an emotionless masked killer. This is all held up with innumerable references to past movies, with pretty much all of the films getting a wink and a nod at one point or another. I am beyond excited for next year's Halloween Ends.
SCORE: