Earlier this year I watched Malefice: A True Story of a Demonic Haunting for review. This was a documentary about paranormal investigator/demonologist Sean Austin's attempts to cleanse an allegedly haunted place from evil forces. Devil Down South is his latest documentary and this time around it is based on a case from Austin's past that he wrote about in his second book.
I figured this would be in a similar format to what came before, that of Austin and his colleagues on location trying to record evidence of the supernatural. Instead, this is focused squarely on a case from his past, one that he was involved in a lot, but only at a distance. It concerns a woman named Abby (the name of her and her family were altered to protect their identities), and how after practising black magic as a teen she appears to have opened herself up to evil forces. These evil forces plagued both her and her child and eventually even affected her second child. The documentary was an hour and fifty minutes long and in that time it covers a whole host of subjects, all revolving around Abby. Starting with her troubled childhood and teenage years, then the events surrounding her first child, before eventually covering the tragic story of her second child and the revelations she found out about her family following this. The format for this documentary is that a lot of what is being told is recounted by talking heads, Abby, her son Alex (nine at the time the doc was made), her partner Andy, and family members all provide the evidence of what they experienced, with their faces hidden and voices distorted. This isn't a happy documentary, what happens isn't a neatly tied up story of horror and salvation from this horror. Instead this is a cautionary tale whose key message seems to be not to mess around with magic, the message that was maybe a little preachy. There is also a lot of religion throughout this, from the visions and dreams that Abby and Alex had of demons and angels, to Austin's firm belief in God. Even removing yourself from all that, what occurred wasn't fun for the people involved. Whether it was all due to mental health issues stemming from genetics or childhood trauma, or if it was actual genuine supernatural phenomenon doesn't really matter; these people believe in the reality of what happened.
Throughout there are plenty of photos and videos, as well as audio recordings to back up what is being said. There are grainy photos taken with phones, audio recordings Austin had taken during the many phone calls with Abby, and lots of evidence of scratch marks on both Abby, and at one point even Austin. Then with the talking head segments you can hear the emotion with the various people. Not so effective for me where the many recreations that mainly featured Arianna Tysinger as Abby and Ozzy Davidson as Alex. Some of these recreations didn't have the best acting and so it took away from the events they were portraying rather than added to them. Saying that though, it was fun to see Eric Connor (one of Austin's colleagues from Malefice and a producer on this) in a small role. 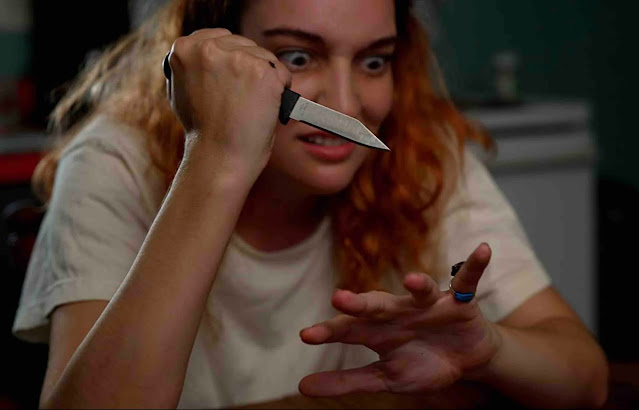 Regardless of if you believe in the supernatural or not, the story that is told here was believed by the people telling it. Strip out everything to do with demons and religion and this is still a bleak documentary due to the real events that happened. Full of dramatic music, plenty of different things going on (imaginary friends, possessed dolls and trances for example) this was interesting. Devil Down South premiered exclusively on ScareNetwork.tv on October 12th.
SCORE: