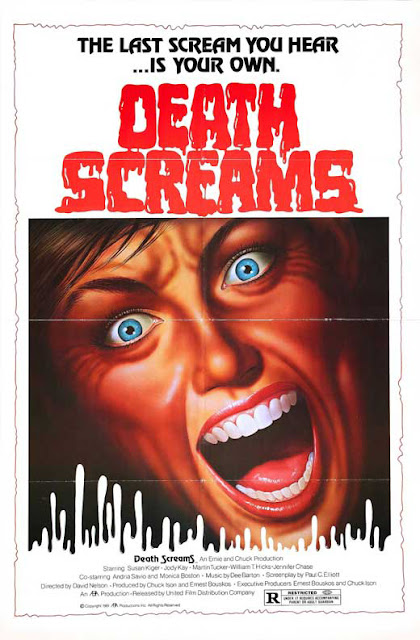 It has only been in the past couple of years that I started to tap into slasher films of the 1980s, and I am so glad that I did. Maybe it is because I am getting older but I have such a bitter sweet pang of nostalgia for decades gone past. Death Screams is a relatively obscure slasher from 1982 (the year of my birth). Directed by David Nelson, with a story written by Paul C. Elliott, this poorly paced horror isn't great by any stretch of the imagination. Watching this in modern day however I found it to be endlessly enjoyable, its many problems are part of the charm in my opinion.

The locals of a small town are enjoying the last day of a carnival. Among those in attendance are a group of teenage friends, including new couple Bob (Curt Rector) and Kathy (Andria Savio - Death Chase), Sandy (Jody Kay), jokester Diddle (John Kohler), promiscuous Ramona (Jennifer Chase) and their leader, Tom (Josh Gamble). Unknown to everyone in town there is a maniac on the loose, who is slowly racking up a sizeable body count. With the teens going out to the river for the party, their night of fun gets cut short by the machete wielding psycho. 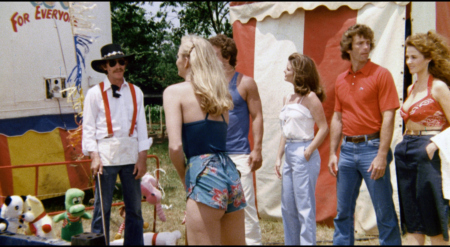 Death Screams starts off both well and weird by having a double murder as its prologue. I say weird as the couple are killed in a hard to decipher way at the same moment a railway train steams past. Their corpses are thrown into the river, as the bodies sink in slow motion, the intro credit sequence plays out. Going from this I expected lots of deaths but it is in fact thirty eight minutes later before the next victim meets their end. There is a strange pacing issue that plagued the movie all the way up to the end. You would expect the third act to be more bloody and action packed than what had come before, and you would be right. However, it almost felt like the filmmakers ran out of time, the kills increase hugely in frequency, and the reveal and defeat of the antagonist happens within minutes. Amusingly when one of the survivors questions why the killer did what they did, they are met with a simple "I don't know" before it cuts to end credits. It felt like the people making the film also had no idea what the motivations of the killer were. I admit it was only reading a plot guide after watching the film that I realised I didn't even pick up on the correct identity of the killer, mistaking them for someone else entirely!

The kill scenes here may increase to a satisfying level but for the kills themselves they are all over in seconds. Usually all that you see as a viewer is a raised arm holding a machete. On the one hand Death Screams did a great job of keeping the killer's identity a mystery. You literally only ever see the killers arm, all the way up until a few minutes before their reveal where you glimpse one of their legs. That coupled with a few possible suspects kept me guessing. Could it be the teen with learning difficulties whose mother has taught them people who are bad deserve to be punished? Could it be the local sheriff who blames the group for the car accident their child got into several years back? It could even be, at a wild guess, the hairy biker who appears in a comedic kissing booth scene during the long, long carnival section of the film. This clever hiding of the killer is wasted though when their reveal makes barely any sense and goes completely unexplained. The kills are mostly unseen, maybe for the best as there are a few dodgy looking severed body parts, and throughout Death Screams we get to see the murdered couple from the prologue floating downstream looking very much like dummies. 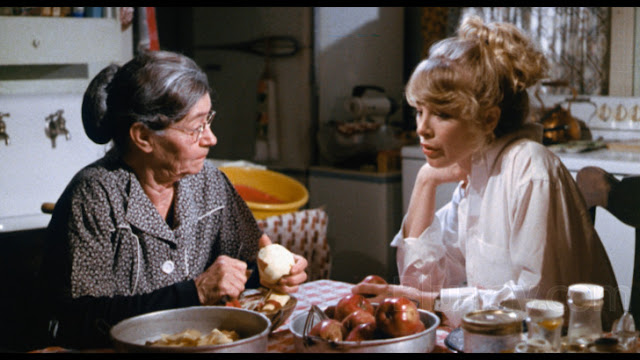 While the first two thirds may be light on much horror this was a snapshot into a bygone era, where teens don't have phones, and are dressed in attire that wouldn't look out of place in the 1970s. Watching this world was fascinating to me. The pacing is kind of terrible though, the overlong first act that takes place at the carnival, a killer who seems to teleport around town with no rhyme or reason, and a general lack of any type of a story for protagonists and antagonist alike. The soundtrack was lovely though, I never got bored of hearing that, nor the kind of scream/sound effect that plays whenever a new victim meets their fate.

As a slasher film Death Screams couldn't be said to be up there with the best. I appreciated the killer being kept a mystery, but they became a little bit too mysterious with death scenes that were far too short to really satisfy. As a window into eighties slasher films though I actually really enjoyed watching this, it was very much of its time with some bad acting and suspect special effects giving it a charm. A restored version of Death Screams heads to the Arrow streaming subscription service on October 22nd.