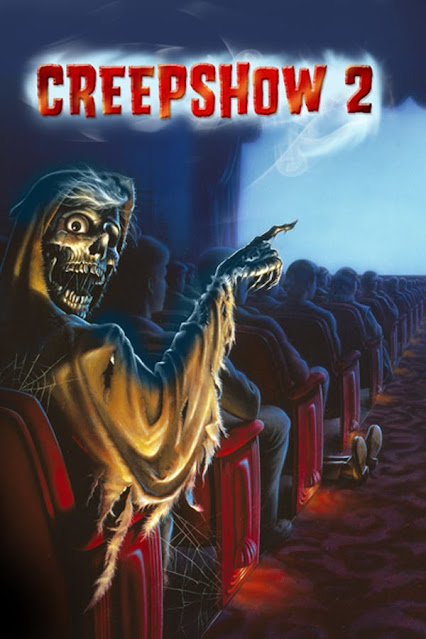 Despite my love of anthology films I had never actually seen the original Creepshow films. I had seen Creepshow 3 from 2006, but that was a cheap cash in, using the name to try and get increased sales. Creepshow 2 was directed by Michael Gornick (Tales from the Darkside TV series) with the stories written by Stephen King (Needful Things) and a screenplay by legend George Romero (Day of the Dead).

This horror anthology brings together three different stories as well as a wrap-around segment. The wrap-around takes the form of a cartoon and has a young boy getting the latest issue of Creepshow off of The Creep (Tom Savini in the live action parts of this wrap-around). Over the course of the film this kid gets caught up with some local bullies, but with a recurring theme being about people getting their just desserts things don't go according to plan for them.
The first segment is titled Old Chief Wood'nhead in which a Mom and Pop store is struggling after the town they are based in fell on hard times. The owner, Ray (George Kennedy) wants to help out the local community and so doesn't mind using his savings to keep the place running. One day his shop is robbed, with the crime getting out of hand. Luckily it turns out the giant wooden Native American statue that guards the store has ways of dealing with those who would harm the owners. Of course anything that references Native Americans can be seen as not so politically correct nowadays but apart from a brief moment of the cartoon version of The Creep dressing up like one this didn't seem too disrespectful. Like many of these stories this one was a morality tale, included some nice practical special effects, and a cool kill that is shown via shadow. 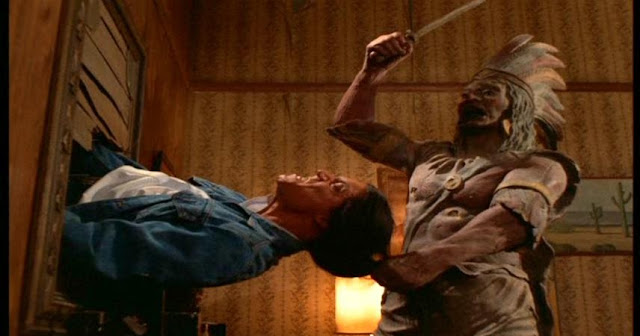 The Raft is the second story and was the most basic. In this one four teens swim out to a floating platform in the middle of a remote lake. When one of them is dragged under the water by what appears to be a sentient oil slick the others must try and survive a similar grizzly fate. I thought the effects for the slick grabbing its victims looked fantastic, in a Cabin Fever type way the victims seem to be having their skin dissolved when grabbed by the oily tendrils. While the plot was simple it was my second favourite and ends on a darkly comedic note.

The final segment here is titled The Hitch-Hiker and starred Lois Chiles (Moonraker). She plays a woman who is driving home back to her husband late one night after sleeping with a male prostitute, when she runs over a hitch-hiker (Tom Wright - Seinfeld TV series). Rather than stop she instead decides to drive off, using the rationale that it was an accident so her life shouldn't be ruined by admitting to causing it. However, whether a manifestation of her guilt, or revenge beyond the grave, she starts to be hounded by the zombified hitch-hiker, whose persistent assault leads her to madness. I loved this one, the most horror filled of the three, and the increasingly bloody and battered hitch-hiker was a joy to follow. That almost his sole line consists of him repeatedly saying "Thanks for the ride lady!" in a menacing voice as he tries to assault the woman was the icing on the cake. 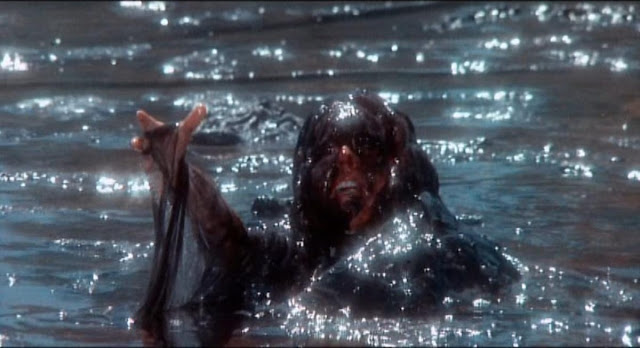 Anyone who has read an anthology review of mine before will know that I love that type of film, especially when there isn't a bad segment to be found. Truth be told I didn't think the wrap-around part was that great, though the animation style is certainly a product of its time. There was also a strange contrast between the old style polite dialogue that began Old Chief Wood'nhead to the swearing and shouting of the robbers, but maybe this was done purposely to shift expectations. Creepshow 2 is currently streaming on Shudder, as is the new Creepshow show that is now on its third season on the platform, I must get around to watching that!