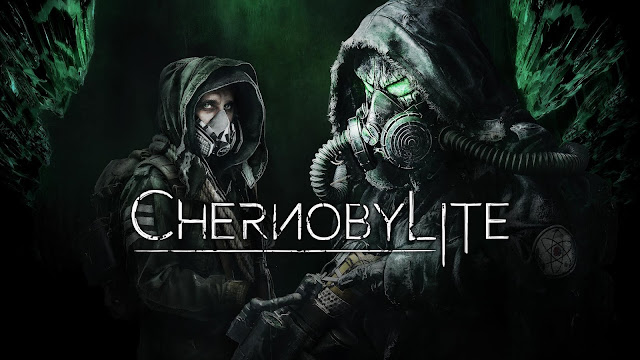 Chernobylite is a science fiction survival horror game that takes place within the Chernobyl Exclusion Zone. I have never played the Stalker series of video games but imagine this must share some similarities. One very cool thing this has going for it is that the various locations you travel to are actually 3D scans and recreations of the real exclusion zone in the Ukraine. Due to the way the games story is set out this is very accessible to dip in and out of. It was developed by The Farm 51, I own their previous game Get Even, but bounced right off it, I was hoping this one I would get on better with.

This takes place thirty years after the Chernobyl Disaster, with you taking the role of Ukrainian scientist Igor Khymynuk. After the disaster occurred he left the area, but in the recent past he began to experience strange dreams about his missing fiancée Tatyana (who vanished shortly before the 1986 disaster happened), and then after receiving a photo of her in the post he is given hope that she is somehow still alive, and so he returns to Chernobyl. The exclusion zone is under the control of a shady military organisation known as the NAR, so Igor hires two mercenaries and together they sneak into the central power plant where Igor used to work, and where he believes Tatyana would be. In this reality a strange material known as chernobylite began to grow in the exclusion zone, a by product of all the radiation. Igor had been studying this material and managed to develop a portal gun that is powered by the substance. His team manage to infiltrate the power plant and retrieve a sample, but they are then ambushed by an apparently supernatural figure known as the Black Stalker. In the chaos that follows, one of the mercenaries is killed, while Igor and the other one, Olivier escape into a portal. Igor realises to get back into the power plant and find Tatyana he is going to have to carry out a heist, to do that he will need to recruit a team of specialists, learn more about his enemies, and get the right tools for the job. 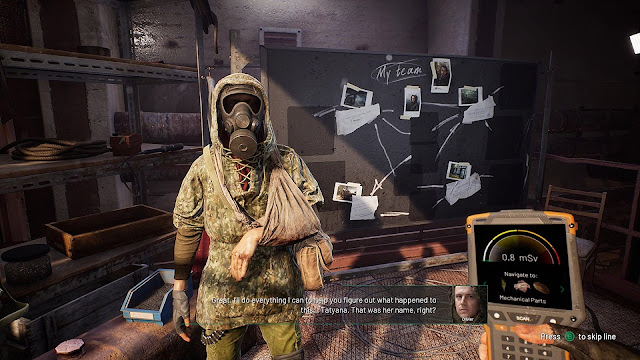 I was a bit put off when I heard that this was a survival game, however, playing on the normal difficulty I really didn't have any trouble with that aspect. The game is split into days, each day you can choose to go to one of the five areas in the game, either to scavenge supplies or to carry out a story mission. In a neat Chrono Trigger style concept you can actually attempt the heist at any point, though it can be seen as similar to the Mass Effect 2 suicide mission in that if you are not fully prepared you can expect to lose some team mates. By the time I did the heist I was around thirty days in, that included about nine days of grinding for materials. Base building was a bullet point about the game that I wasn't looking forward to. I hate base building as I find it so confusing. Here though it is a lot simpler than I feared, the actual base is already built, a concrete building that Igor has rented off local Stalker Mikhail. By gathering items in the areas you travel to you can build various machines. These can create lockpicks, be used to upgrade weapons, create healing items and more. There is a slight need to juggle in that the more machines you make, the more power is needed to run them, the more air filtration units are needed to provide clean air, and the more anti radiation devices are needed. This is balanced against the comfort of your team, by building beds, TVs, radios and plants you can raise the comfort level. It is all very slight and so I never struggled with this.

At the start of each day you typically get a new mission that is presented either by a broadcast from your radio, or one of the characters at the hideout requesting help with something. Nearly the entire game takes place over five different areas. These include a central living area, the port, the woods and more and share an obvious similar look to them. The areas are not gigantic but they are a decent size. Radiation is used as a game device to stop you travelling off the beaten path too much. You have a Giger counter and so you can get damaged by radiation should you try and go to parts the game doesn't want you to. This was a cool in-game reason for why you can't move outside these areas, while the wormhole gun was a similarly cool reason for why you teleport from your base to these places. You get access to various weapons, including a revolver, rifle, shotgun and others but the game is steered more towards stealth. The times I came into conflict it could get a little bit frustrating. This was in part to your character who has the turning speed of a tank (this can be changed in the options I believe), and also because the guards you face are camouflaged very well into the environments. I found stealth to be a more fun way of playing the game. There are also green zombie like creatures who show up, these were best to be avoided. Missions typically involve you heading to a location on the map, either to meet with someone or to collect an important clue or item. 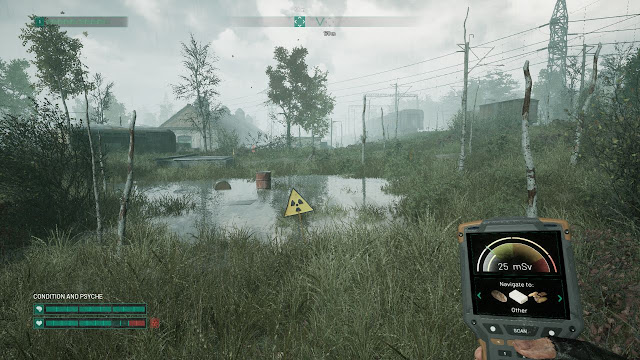 At the end of each day you return back to your base. Here you can build new objects for the base, and you can learn new abilities from your allies. The skill tree is my most favourite part of Chrernobylite as it gives you in-game reasons for why you suddenly have better skills. Increasing your item slots for instance occurs as a character explains to you how to better pack your rucksack. Elsewhere, the ability to get more resources from collecting mushrooms and herbs is explained in game as you being better educated on what parts of these are edible. I found this to be so clever, as opposed to just giving you new abilities with no explanation like most games do. While at the base you can also get new daily conversations with your allies and provide them with better guns and armour. Each day all of your teammates can be sent off to do their own missions, these all have a percentage point chance of the allies being successful. While I never tried it, it is also possible to send allies off to do the proper main storyline missions. As you gather clues there are four main mysteries that you are getting knowledge about. While rarely explained, when you get enough clues you can head into a VR simulation that somehow recreates real past events for you to experience. These play out like combat free dream sequences. The final thing you can do at your base is voluntarily kill yourself!

Death is not the end in Chernobylite, when you die you end up in a nexus place where using the substance you are able to go back in time and alter past events. There are a whole bunch of key events that not only affect the game's story, but also affect what your allies think of you. Make an ally too unhappy with you and they will leave permanently. Some of these key decisions were really tough to call. Do you blow up a NAR convoy for instance when one of your allies friends has unknowingly wandered into the blast radius? This part of the game was one that annoyed me slightly, but it was my own doing. Having finished all the main story missions I still hadn't acquired all the things I needed to do a perfect run of the heist, I ended up grinding out materials so that I could make all the changes to my past timeline in order to get this last mission done right. Not going into much detail but that last mission did feel very similar to Mass Effect 2, at set points you have to decide which of your specialists skills to use, the wrong decisions can lead to terrible consequences. 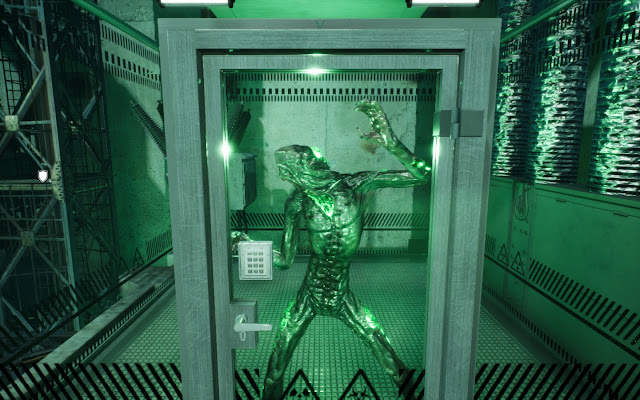 I could speak so much more about this game, needless to say it was a fun experience, I really loved the daily loop that made it easy to pick up and put down. It isn't without its faults, there is a reason you are given a way not to have to engage in combat, then there are the bugs. On my roughly twenty to thirty hour playthrough the game crashed around seven or eight times, then occasionally with the dialogue it would have Igor's picture and name on the text box even though a different character was speaking. I haven't even mentioned my allies! You get five people eventually, from calm and collected Olga, to the violently angry Mikhail, crazy rat obsessed Tarakhan, the thief Sashko, and of course wonderful Olivier. All have very different personalities and a whole bunch of dialogue to flesh out their characters. I think there is an option for English voice work but I stayed with the default Russian. All in all Chernobylite was a fun experience that was a little rough around the edges, but never got dull despite a limited sized game world thanks to the good atmosphere, graphics and music.