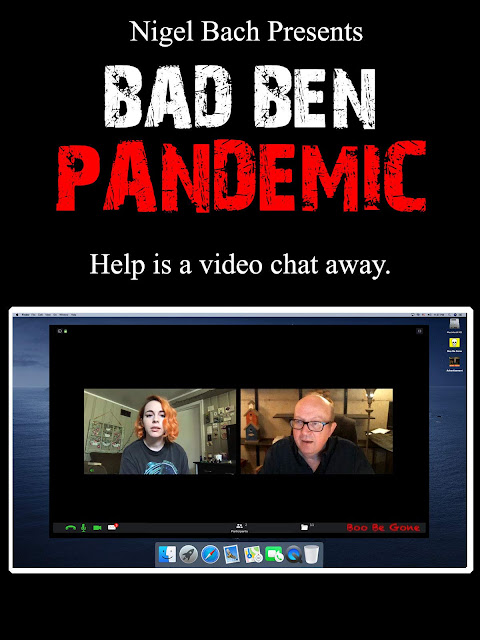 With the ninth entry in the Bad Ben series of found footage horrors releasing next week I took it upon myself to watch a few of the others. I was pleasantly surprised with the original Bad Ben, while not much happened the actual quality was good. Bad Ben: Pandemic was the eighth entry and as the title implies, it was created during the height of the global pandemic. It was literally one made for the fans.

Now a bit of a spoiler for the first film but things looked bad for the hapless Tom Riley (Nigel Bach who also wrote and directed his parts here) at the end of that one. In Pandemic Tom is alive and well, and having had lots and lots of experience battling demons (and discovering the existence of alternate realities) he is now officially a paranormal investigator. With lockdown in full effect he has taken it upon himself to offer his services. He has invited people to send him their videos, and to call him up so that he can offer advice on if the spooky situation they find themselves in is due to the pandemic or down to the paranormal. 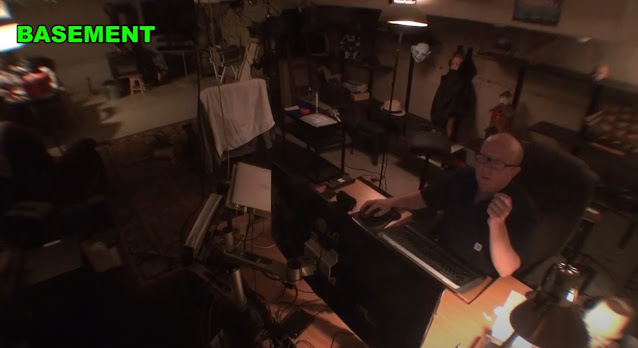 Bad Ben: Pandemic is comprised of lots and lots of fan made short found footage films. While this follows an anthology style format we never leave Tom, throughout the shorts he is reacting and trying to offer advice to the people who he is interacting with. What is clever about this is how he comments on the events as if he is in direct conversation with the people even though he isn't. This leads to plenty of humorous moments of him shouting at people to unmute him due to them not paying attention to his words. On the Bad Ben side of things this was excellent, Bach is just as unflappable and irritable as he was in the past. He may be just a viewer of these strange events in a Mystery Science Theater 3000 type of way but some of his comments were legitimately laugh out loud funny. His actual storyline has almost nothing to it until the epilogue when he gets an idea based off one of the videos he was sent. Maybe setting things up for the latest sequel, Bad Ben: Benign.

The problem with this film is down to the quality of the short films. They are everything I feared the original film would be. You have poor quality footage, subpar acting, and worst of all lots of shaky hand-cam footage. It feels a bit harsh to be so down on the acting when these are literally non actors and fans, but that wasn't the only issue. I imagine everyone submitting a video had to stick to a similar format as nearly every single one of the short films plays out exactly the same way. Obviously due to the special circumstances everyone is trapped at home, it was more how these all played out. A character will be saying their roommate or someone else has either gone missing or has been acting strangely. Then this person will be shown to be standing dead still in the background, before eventually charging at the camera screaming. It wasn't even that these shorts all seemed identical, it was that Bad Bed: Pandemic clocks in at one hour fifty minutes. It would have benefitted by being drastically cut down, a seventy minute run time would have been perfect if just the best shorts were used. There are a couple of good ones, one relatively early on has a man whose family are all standing stock still together, this was actually a little bit creepy. Then you have a very high energy short involving three roommates, I loved the chaotic energy of this one. There were a couple more that were mostly decent but as to the rest, I was bored to actual tears. With similar sound effects and editing techniques used throughout I imagine Bach must have been editing these submissions himself, this at least helped with continuity.

The actual Bad Ben parts of Pandemic was as entertaining as it always seemed to be. This will forever remain one of the those pandemic movies trapped in time, a screenshot of an experience we all had to go through. Because of that this could be argued to be a historically important piece of media! Tom remains a fun character, and his sarcastic comments and his annoyance at being ignored by the various people contacting him was always fun. With the majority of the film being these terrible fan made films though it felt like it went on far, far too long. If you are a fan of the series then you will get some enjoyment with this, otherwise I would maybe suggest skipping past some of the more samey segments lest you get too bored.