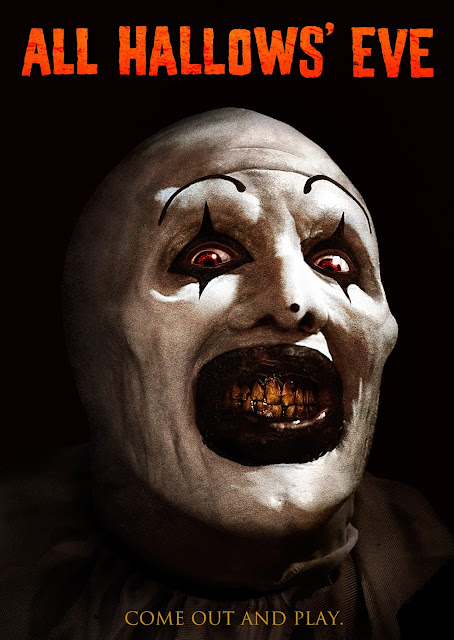 I think the danger of me being left to my own devices and choosing the films I will watch for review is that as I am such a huge fan of anthologies that is what I naturally gravitate towards. Earlier this week was my review of Creepshow 2 and now comes a review of All Hallow's Eve. This was written and directed by Damien Leone and features his wonderfully creepy creation, Art the Clown. This clown first originated in a 2008 short film and proved to be so popular that he went on to star in his own short (both of which make up segments here), then from there he was made into a central antagonist in this anthology, before finally getting his own proper feature length film with 2016's Terrifier. That proved to be popular enough that a sequel is currently in the process of being made.

In a somewhat refreshing change the wrap-around story isn't merely there as a way to introduce the short films, instead it shares roughly the same amount of screen time as any of the three segments. In it, Sarah (Katie Maguire - Terrifier) is babysitting two children of her friends, and they have just returned from trick or treating. One of them is sorting through his treat bag when he notices a strange VHS tape in with his sweets, though has no memory of anyone giving him this. Him and his sister Tia (Sydney Freihofer) beg Sarah to let them watch the tape, figuring it will be a horror film. Watching it they find a disturbing short film. This wrap-around eventually has Sarah putting the kids to bed while she decides to carry on watching the film. With each film that passes more and more strange things start occurring within the house.
As a set up for the different segments this did a tremendous job, in fact I preferred this to two of the actual segments. It's Halloween for one, and that is always a great time to set a horror film, but it is also the best shot and most brightly lit part of All Hallows' Eve. It culminates in a moment that brought to mind the end of The League of Gentlemen's Christmas special, it was obvious this is where things would go but it was suitably messed up and the perfect way to finish. The three segments themselves are a bit more patchy in quality, likely due to them pulling on some of Leone's earlier works. 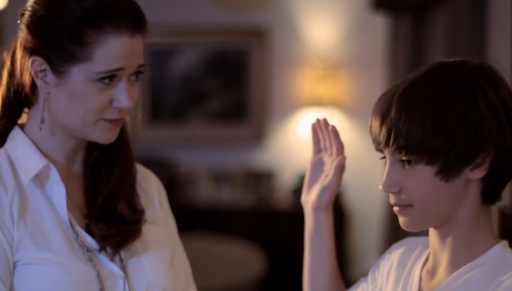 The first is eleven minutes and titled The 9th Circle, it concerns a woman waiting in an underground railway station's waiting room. She notices a man dressed as a creepy clown (Mike Giannelli). It isn't long before she has been attacked by him and drugged. Waking up deep in the underground with a chain around her neck she encounters other kidnapped woman, together they make a descent into the dark abandoned tunnels in order to try and find the source of their chains so that they can figure out how to free themselves. In general I liked the idea behind this one, there is a trippy nightmarish vibe, and despite featuring the first appearance of Art he only appears in the very first scene. This includes no end of mutant and grotesque masked wearing creatures. It had some good moments, the initial train station scene was excellent, as was the scene set in the room with the chained women. The special effects did leave a lot to be desired, amputations and a slit open belly looked extremely fake, but I did think the protagonist (played by Kayla Lian) was good in her role.

The second segment was unfortunately by far the least exciting part. In this untitled short a woman is at home late one night in her remote when all the power suddenly goes out. Before long there is a strange alien creature (Brandon deSpain) exploring her house, who is most interested in getting its hands on the woman. I thought everything about the alien was fantastic, it looked so weird and had a truly bizarre way of moving, like it was swimming through the rooms. Sadly though this short was mostly just dull, far too much of it was dedicated to the woman walking around in the dark on her own looking scared. Then there is the shock ending, an ending that doesn't work at all within the context of the segment as the ending exists just to ever so tangentially tie this to the rest of All Hallows' Eve. 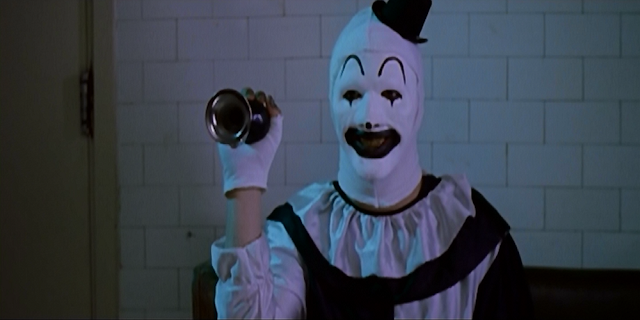 The third segment is the original short version of Terrifier and was easily the most twisted and the best part of this anthology. A woman (Marie Maser) is on her way to New York but has gotten lost in the backroads. After getting petrol she is shocked to see the attendant (Michael Chmiel) getting hacked into bits by a man dressed in a creepy clown costume (of course this is Art). This begins a cat and mouse chase across the backroads, with Art mysteriously somehow always being near the woman despite her speeding away from him constantly in her car. To be honest I think this short was actually a lot better than the feature length film of the same name. I love how random the meeting of the two were, and the horror of being unable to escape this nightmare creation. It leads to moments of body violence that looked so much better than the effects in The 9th Circle and was really twisted and messed up in a way that felt very Rob Zombie. It ends on a fantastic scene that really was a horrific way to end this, like a modern day reimagining of Freaks. My complaints with this one mainly come from the decision to put artificial grain effects over the top of the movie to make it look like a 1970's grindhouse horror, it didn't quite work.

All Hallows' Eve was great within the context of giving us more of Art the Clown, it was fun to see an earlier less polished version of the character. As an anthology it doesn't provide enough variation, including the wrap-around all four segments have a lone woman in peril late at night, being hunted by a man. It would have broke up the pace a bit to have at least one segment featuring a group of people, or even with a man as the protagonist. Art is extremely misogynistic so it makes sense he would target women, but as an anthology it is nice to get some variation. Aside from that, and the dull middle segment this was good though, and it was nice to see the often typically throwaway wraparound section get some love, after all, it is what binds a anthology together. All Hallows' Eve is currently streaming on Amazon Prime.