The Rotting Zombie's Round-up of Horror News for September 2021 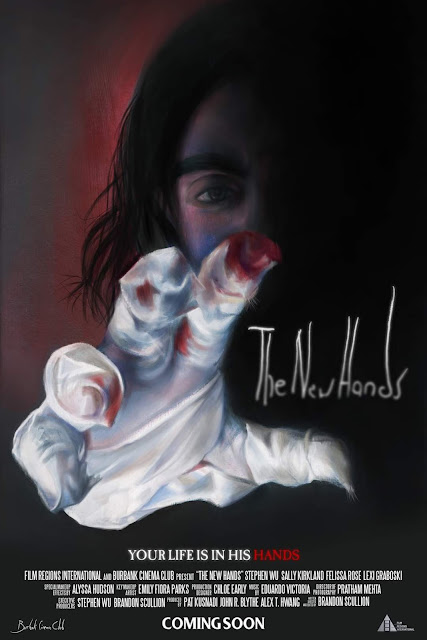 After re-watching The Matrix and experiencing an unexpected bittersweet feeling of remembering the 2000s I have decided to try and live in the moment more. After all, there will come a day at some point in the future in which I look back on the 2020s with as much a feel of loss and regret as I currently do for the eighties, nineties and two thousands. With that in mind onto the news for September.
New horror comedy The New Hands has its world premiere on 1st October at the Silicon Beach Film Festival held at Hollywood's Chinese Theater. This was written and directed by Brandon Scullion and based on his short film of the same name. It stars Oscar nominee and Golden Globe winner Sally Kirkland, Stephen Wu, Lexi Graboski and Felissa Rose (Sleepaway Camp) and is about a man who has it in his head that if he replaces his ruined hands with parts taken from people he has killed then he will be able to somehow win back his ex-girlfriend.

A teaser trailer came out in June for horror film Night of the Zomghouls. Directed by Will Collazo Jr. this stars James Duvall (Independence Day), Sadie Katz (The Amityville Harvest), Mike Ferguson (Animal Kingdom), Julie Ann Prescott (Teacher Shortage), and Shawn C Phillips (Dead Ant). The synopsis was set out like a line of dialogue from the film's killer, Jack Rogers. It reads like a mass murderer sacrifices himself to the devil and returns in the form of being able to possess animatronics at a children's birthday place. Sounds all very Five Nights at Freddy's to me.

The Green Sea stars Katharine Isabelle (Ginger Snaps) as an American writer based in remote Ireland. Past memories of hers start to mix together with the fantasy world of the novel she is writing and this causes a change in her life when she encounters Kid (Hazel Doupe - Float Like a Butterfly) who happened to also be the protagonist from her book. This was written and directed by Randal Plunkett and released on 13th July in North America. This indie film can be found on a variety of VOD and Digital platforms.

Psychedelic horror The Invisible Mother is due to have its Digital debut on October 12th in North America via Freestyle Digital Media. The film is about a lesbian stoner and her grandparents who are being haunted by the spirits of an old photo album. This eventually results in her grandfather being taken by an entity from a Victorian photograph and so the stoner must team up with a bunch of random people in order to try and stop him and everyone else by being taken by 'the invisible mother'. This crazy but cool sounding indie movie was written and directed by Jacob Gillman and Matthew Diebler and stars Fayelyn Bilodeau, Debra Wilson, Kiersten Warren, Richard Rhiele, Helen Slayton-Hughes and Kale Clauson.

Gothic rock band October Noir have released their new full-length release, Fate, Wine & Wisteria with the themes of the album being about lust, loss, love, pain and arrogance. Fittingly the album includes thirteen tracks, and features the recently released single, Windows. Having listened to the single I can confirm the band sound a lot like Type O Negative.

Another gothic rock band, this time in the form of Black Angel who earlier this year released their third studio album, Prince of Darkness. The concept of the album is to take the listener on a journey alongside the album's titular Prince as he rampages through 10th century England. The album offers traditional gothic rock alongside a tinge of 80's goth.
Posted by Daniel Simmonds at 10:43