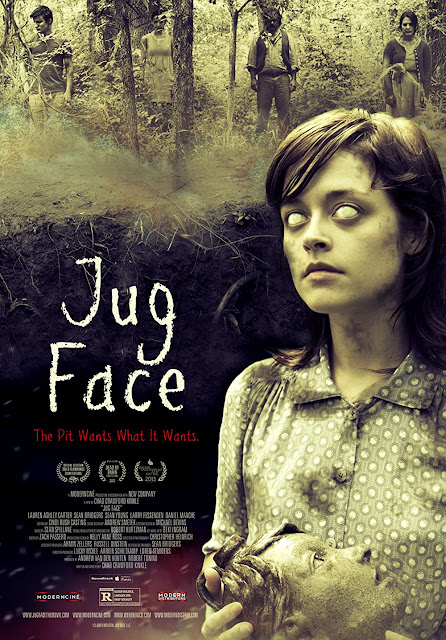 I recently saw Chad Crawford Kinkle's latest horror film Dementer and realised he was also responsible for another cult based horror, the excellently titled Jug Face. I had heard of that and having enjoyed Dementer knew I had to see it. Well since I first heard of it, it had changed its title to the much less intriguing The Pit, but my interest was already taken and so here are my thoughts on it.
The film takes place within the woodland commune of a cult whose members worship the entity that resides within a pit, one which in exchange for the occasional sacrifice offers the group the cure to all their maladies. The next sacrifice is always chosen by the potter, simple Dawai (Sean Bridgers - The Woman). He receives a vision and then creates a (formally titular) jug that bears the face of the chosen. When Ada (Lauren Ashley Carter - The Woman), having recently discovered she's pregnant at the hands of her brother, Jessaby (Daniel Manche - The Girl Next Door) learns she is the next to be chosen she secretly hides her jug in the woods. This sets up a chain of events that threatens to destroy the commune she is a part of. 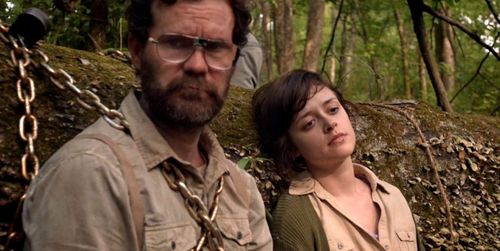 The Pit has the feeling of a Shakespearean tragedy to it, with the way that many of the events of the story are directly caused by the actions of the protagonist. Ada is hard to really root for, if incest isn't enough to damage her character you then have the multitude of deaths that occur as a result of her actions. The cult in Dementer had been left far behind, there was always a question if there was anything supernatural at all going on in this one. With The Pit there is unquestionably supernatural elements. The pit itself is just shown to bubble occasionally, but Ada is cursed with seeing through the entities eyes when it kills, something that is always shown in first person perspective. Being an indie horror I think that was the right choice to make. Throughout the special effects are practical based and look good. From contact lenses to make eyes look milky white, to some throat slashings, is all fitting with the vibe.
The acting of the main cast is another strong area, I particularly liked the characters of Dawai and Sustin (Larry Fessenden - Dementer). Dawai could have became a caricature, being a simple man, but Bridgers brings some likeability to him, he is never too intense, just an accepting presence who had a good rapport with the protagonist. Fessenden had the best acted role in the form of Ada's father. I loved how his character acted around Ada, you could easily tell the conflicting layers of love that troubled him when dealing with her. One part that didn't work quite so well was the spirit of a former pit victim that haunted Ada's senile grandfather. He literally stood out like a sore thumb and just seemed to be there to translate the pit's wishes. I did like the subplot that her grandfather had done something similar to what she had done at some point in the past. 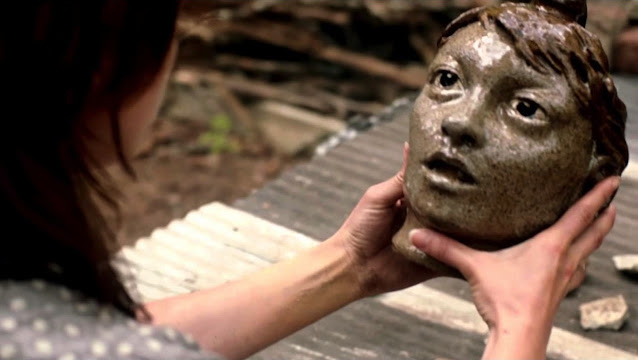 I figured the story of The Pit would be Ada's adventure to leave, instead a good ninety percent of the film takes place there, and is more about showing the fallout resulting from Ada's actions than any story of escape. Like with Dementer there is a good score with music by Sean Spillane, but unlike that film the intention isn't to create a feeling of fear. All who live in the commune accept the rules and so the darkness is out on display rather than hidden away waiting to strike.
I'm glad I finally got around to watching The Pit, it told a cult story that put some work into not making everyone seem like crazy people. By having it set with a group of insiders the insular story worked well against the limitations of the indie budget. This was something different to what I expected, but still a film that I enjoyed all the way up to the lovely cinematography of that final shot. The Pit can currently be streamed on Prime Video.
SCORE: