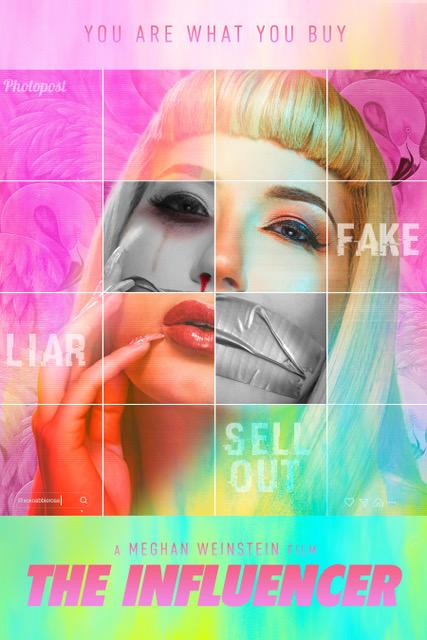 The Influencer didn't sound like a typical horror film, sometimes though a synopsis grabs you and so I was happy to check it out for review. Written and directed by Meghan Weinstein this comedic thriller takes a look at the world of social influencing and offers an exaggerated view while also giving some valid points, and on the side it also dips its toes into toxic masculinity.

Abbie Rose (played by real life social influencer and comedian Kasia Szarek) has it all, she is seemingly the most popular social influencer on the planet and tightly rules over her empire, every action she does going towards the brand she has worked so hard to create. One night her home is invaded by a gang that include among them geeky Two (Janeva Zentz), aggressive Three (Shantell Yasmine Abeydeera - DemonHuntr), psychotic Four (Victoria D. Wells) and the sole male member, Five (Ian Richard Jones). They take her hostage and promise if she puts out a series of videos using a script they have written that they will let her go. After an admirer of hers, the walking anti-feminist Justin (Mark Valeriano) is also taken hostage, and badly beaten in the process things start to look like they are going to take a darker turn.

Starting with a neatly edited intro sequence that plays out the credits as if they are different windows on a PC we get into the film with the first act establishing just who Abbie is in this world. With over worked interns, fake friends and her forever obsessed with getting the perfect photos and videos this felt like an exaggerated version of the real world. One area that The Influencer really impressed me was how such a caricature of a social influencer over the course of the movie slowly revealed a real person hiding within. Moments when Abbie defends her life, saying how much hard work she has had to put in to get to the position she is in, and how she recognises the people who make up her social circles are all as fake as she is humanises her from the cartoon character she began as, Szarek was surprisingly well cast. The same can almost be said for the film's antagonist, the leader of the gang, One. I can't spoil who that character is, but the film tries to make the character somewhat less one dimensional. For the other characters I thought Valeriano was great as Justin, there is never any attempt whatsoever to give him layers, instead every word he says and every action he performs is all from the stereotype of a sex obsessed, misogynistic idiot, but he became the funniest character in The Influencer due to this.
As likeable as the main leads where it was a shame that I could never get on board with the gang. As noble as they insist their cause is they were all characters I did not like in the slightest, they were all weird in the wrong ways and I was waiting for their comeuppance, or at least a reason for them to no longer be in the film.

The thriller element is as light as the comedy element here, both flow over each other but never become the focal point. There is some peril felt for Abbie, especially when the treatment of her gets more rough. The special effects were ok, one scene set in a car driving down a road was obviously not actually doing that, with a green screen or something to make it seem that was the case. Elsewhere things looked much better, I loved the set design for Abbie's house, especially some cool looking flamingo wallpaper, and the huge pictures of her on her walls felt fitting. Everything revolving around the online world was well displayed. It all looks as fake as anything, but the bright colours and early 2000s style of exaggerated coolness fitted the film's look. With the plot it didn't really end up in a place that was satisfying, seemed to get wrapped up a little too neatly, even if that plays into 'cancel culture' and other terms I'm a bit too old to really understand.

The Influencer is a film with a point to make, and so it is elevated from just being some vapid meaningless comedy thriller jumping on the bandwagon of hot topics. The point it is making is something that I think most people will already know, but it feels relevant in an age of social influencers having made some suspect promotion choices in order to place fame and wealth over actually trying to be a role model for the people who follow them. The Influencer is coming to DVD and VOD on September 14th via Breaking Glass Pictures.