Spookware is a horror themed comedic adventure game that's whole model is most keenly inspired by the WarioWare games. These were micro sized mini games that can often be completed within a matter of seconds. It took me a little while to really get into the spirit of what Spookware was going for, but once I was there I had a fun time.

Lefti, Midi, and Righti are three teenage skeletons in a world that is populated exclusively by skeletons. The core game features the first episode that includes within it 60 micro games to experience. The rest of the game which brings together episodes two, three, and four are planned to come later on as downloadable content and will bring around 200 more micro games. The prologue has the three friends in their crypt based home watching horror films on their VHS player. This straight away had you playing multiple mini games in a row and I feared the whole game would just be this. Instead the game is far more of an adventure game, think a point and click with the puzzles replaced with mini games. Each chapter felt wildly different in styles of what you were doing thankfully. The first chapter took place on a school campus and had you trying to recruit members of a school band. All the mini games here were rhythm action style ones. This first chapter didn't give me much of a good impression. I found the location a bit confusing to get around, while I didn't really enjoy the style of mini games. 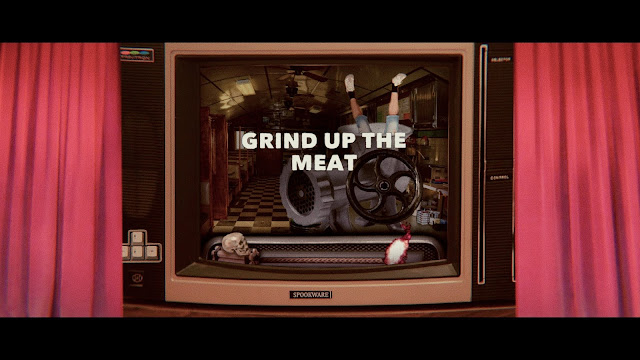 The second chapter was where I really began to enjoy the silly and mostly light-hearted world of Spookware. This had you investigating a murder on a cruise ship, it was here I saw how varied the game could become. You had almost Phoenix Wright style mini games where people would be speaking and you would have to object and present proof if you thought they were lying. The final chapter again switched up the format, this time it had a restaurant simulation in which you had to manually seat diners at tables before doing mini games in order to make their meal. I loved the variation and I loved how low key the story was. Each chapter is self contained within its ten or so screens. You move around using the number pad, return or the spacebar is all you need to interact with characters and travel between areas. The adventure feel of this game really reminded me of the types of PC games you would get in the nineties, in particular I was reminded of a great Beavis and Butthead adventure game from that period. The story is so chilled and enjoyable in the relatively mundane settings the characters find themselves in. By the time the game wraps up things really are not resolved, it all ends on a bit of a cliff-hanger, so it will be interesting to see how much is charged for this additional DLC as it seems most the game will be in that format. It's roughly an hour per chapter with my final run time just over that, so I guess it is up to you if you think the asking price is worth it.

The graphics are very simple but charming. The three protagonists walk around locations that look like they are created out of real photos. All throughout there is a Monty Python style feel with how photos and their simple animations are brought into the world. The horror is slight but surprisingly there is some, notable with the character of a creepy deer skull headed figure who pops up in a few nightmare sequences that hint at darkness that doesn't exist elsewhere. The mini games range in quality, there were some I just could not work out how to do. In a great nod to accessibility, during the challenge sections (in which you must complete eight challenges and then a 'boss' challenge in a row without failing more than three times), should you keep failing then the deer skull man will allow you to choose a mini game to get rid of. The mini games are usually ghoulish, such as skewing eyeballs on a cocktail stick, grinding a man up in a huge meat grinder, and turning a rat on a spit roast. Mainly using the keyboard to control I didn't have too much trouble while still enjoying what I was doing. The second chapter changed it up to feature games that could all be played using a mouse. 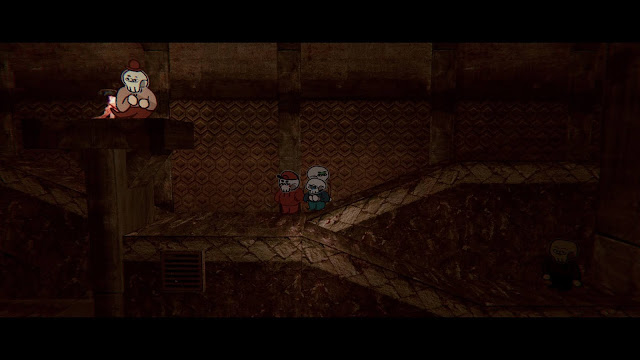 After a bit of a dull start I really came to love what Spookware was doing. I enjoyed how chilled out it felt to play this, relaxing music, and a plot that is light and silly despite some of the dark situations that are hinted at. When the end credits rolled I was left wanting more, and with DLC coming (at a hopefully decent price) I will be able to see where else I get to explore in this skeleton filled world.