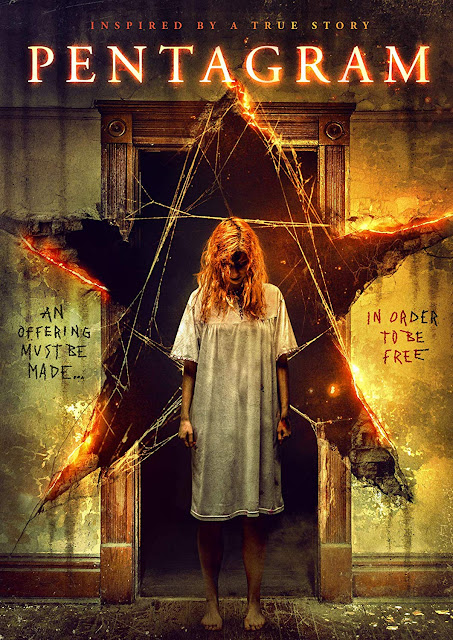 Having two weeks off my day job currently I thought I would store up some film reviews for a rainy day. While browsing through Netflix I came across Steve Lawson's Pentagram. Earlier this year I saw another of his films, Ripper Untold, and while it had its problems, most notably a very low budget, it wasn't that bad. The same can be said for Pentagram, it is again a low budget indie horror, this had the potential for greatness but a lack of ideas and some stupid plot faults let this down.

A gang of four people are making their way across the backroads of America, with the aim of robbing enough places along the way to make it to L.A for a hoped for brighter future. These four are made up of career criminal Max (Alexis Rodney - Guardians of the Galaxy), Lauren (Rachel Warren - Eve), Luke (Charlie Woodward - Pennyworth), and his drug addicted sister, Holly (Chloe Farnworth - Eve) who is suffering severe withdrawal symptoms. After the latest diner they rob results in the angry waitress shooting a hole in their car engine they soon find themselves broken down in the middle of nowhere. They decide to head to an abandoned house they spotted and it is there that they come across a very strange sight. Holly discovers an odd British man, Oliver (Michael McKell from UK soaps Emmerdale and Doctors in a scene stealing role) standing in the middle of a pentagram drawn onto the floor. The man calmly explains to the four that he was performing a demonic sacrifice but it went quite wrong and now he finds himself trapped within the circle. Should he leave, he explains, the demon that has been summoned will kill him. With Holly managing to get taken hostage by the man the three others enter the circle to intervene and find themselves branded with a pentagram mark, which the man tells them means they are now cursed also. Should they leave the circle the demon will kill them, and should any of the five candles placed around the pentagram go out, then that will allow the demon to enter and kill them. 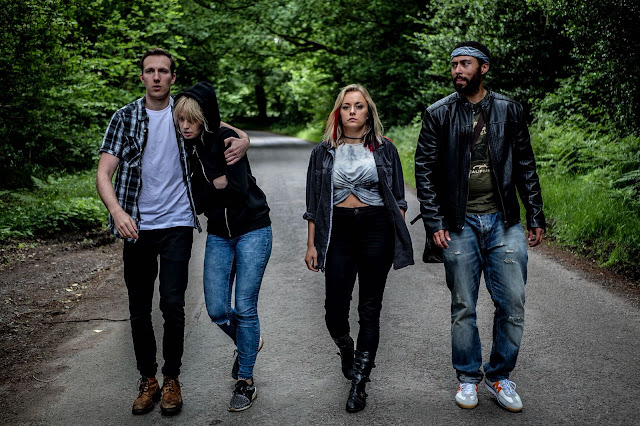 After the first ten minutes or so (including a lengthy and dull credit sequence) this becomes a single room horror, not a bad genre to be a part of. I think more than anything this was done for budgetary reasons. Single room horror films work if the characterisation is strong, and if there are enough ideas going to keep the film entertaining to watch. Beyond its decent set-up Pentagram starts to fade. The biggest error by far in my opinion was the decision to show the demonic creature that the group were threatened by. Rather than give half glimpses, or even just off camera suggestions, the demon is shown in full view at the culmination of the first act. I get that something drastic had to happen for the characters to believe the far fetched situation they were in, but I don't believe the viewer needed to see it. The demon appears to the accompiment of some low-fi flame effects, the demon itself looks as generic as you could imagine, and looks super imposed onto the screen. All this combines to make this evil force seem totally unthreatening and kind of lame. If I was allowed to make one single change to this movie it would be to edit out the shots that show the demon, it had that strong an effect of reducing my enjoyment out of being able to get any kind of fear here.

What this gets right is the characters, they may be cliché but the main four, and Oliver had some well cast actors. I would argue that Lauren is the weakest, purely that there is no real backstory at all for her. Max was the most generic but he also had some of the best acting, even if his character was designed to be the abrasive cog. I liked how the set-up also includes rifts within the gang, even before anything supernatural happens Max is having secret conversations with Lauren about how he wants to ditch Luke and his sister due to seeing them as dead weight. That, as well as his penchant for telling spooky stories that he swears are true sets up a few things. First, that there is going to inevitably be friction later on, and also that it makes it that tiny bit more acceptable that the characters don't take too long to understand the real danger they are in. Pentagram has a neat idea of having characters in the film feel like they have existed prior to the film starting. Oliver already stood in his pentagram with initially no explanation of how this happened, as well as the gang talking about recent exploits of theirs gave their characters a lived in feel. 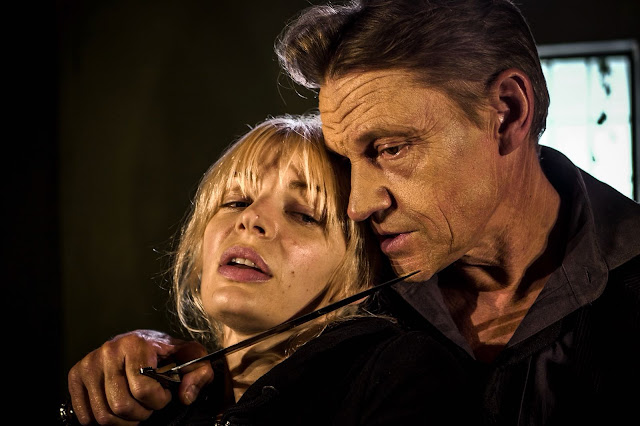 The danger may be never far away but it still didn't make for an exciting film. The only way to leave the circle is by reading a spell from Oliver's book and killing someone within the circle. This feeds into the plot later on but for the most part the characters are just trying to keep the rapidly dwindling candles lit. This makes up the whole of the meandering second act that gets to silly degrees when multiple characters are standing around in their underwear having crafted a rope made out of clothes which they use to try and pull in various conveniently placed items just out of arms reach. The way these characters hug each other after each successful throw made it feel like I was watching The Crystal Maze or something. The plot thankfully gets a move on in the third act and for the most part it wasn't that surprising in how events play out. The saving grace for Pentagram was the ending, it did something different to what I expected, a strong finish with a satisfying conclusion.

There are some good ideas in this film but it is let down by a dull middle, and the disastrous decision to show the demonic force fully on screen. While this wasn't fantastic it was still a decent enough indie horror, thanks mainly to a good core cast, certainly better than the 2.8/10 rating it currently has on IMDB. Pentagram is currently streaming on Netflix.

Posted by Daniel Simmonds at 08:04