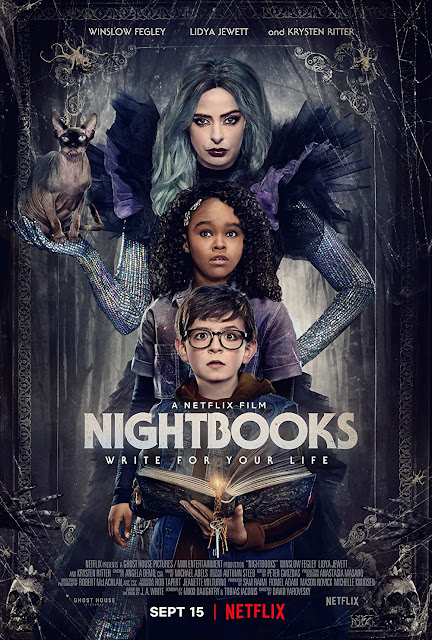 I chose Nightbooks for review knowing nothing about it. I have a habit on Netflix of adding almost anything to my Netflix queue, so much so there are hundreds and hundreds of films and shows on it. Nightbooks is a children's horror film directed by David Yarovesky (Brightburn) and based on the book by J.A White. It seems Neflix does like to make films out of books as this follows on from the Fear Street trilogy that was released earlier this year. While this may be aimed at children (having a PG rating), I think I would have been terrified watching this as a child!

After an unknown incident Alex (Winslow Fegley) angrily rips horror film posters off of his bedroom walls and throws them, along with a heap of horror story books he has written into a rucksack and sneaks out of his apartment, all this to the accompiment of his parents argue about how weird he is in the background. The boy gets in the elevator but it breaks down, opening up on a strange floor of the apartment block he lives in. While walking down a passageway he spies an open doorway, one of his favourite films The Lost Boys is playing on a TV, while there is a fresh slice of pumpkin pie on a plate next to it. Unable to resist Alex enters the apartment but after trying the food passes out. He awakens to discover he is a prisoner of an evil witch named Natacha (Krysten Ritter - Jessica Jones). He soon finds another child, Yasmin (Lidya Jewett) who is also trapped. Both the children are forced to work as slaves for the witch, but for Alex, upon learning he writes scary stories he is told he must tell Natacha a scary story every single night. With the threat of death should his stories not scare, Alex begins to try and find a way to escape the witches magical apartment. 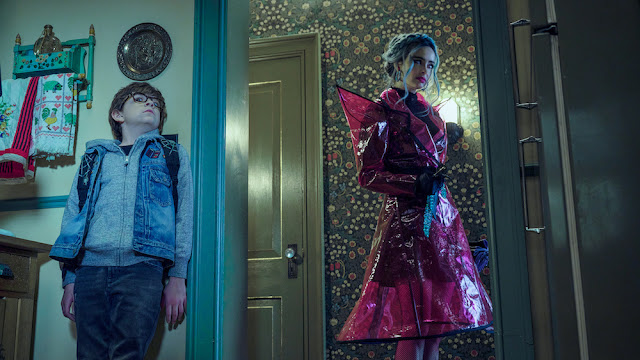 As a child I was quite cowardly. I did love monsters and have memories of constantly getting my parents to rent out the VHS of The Monster Squad, but I think Nightbooks would have been too much for me. Rather than pander to a younger audience this instead relies a lot on the techniques that adult horror films use. Light and shadow, partially glimpsed figures and swiftly edited shots are all impressive in creating a feel of horror. Sure, there isn't much actual peril the children are in, threatened with being transformed into living statues did seem like a fate worse than death but nothing much happens to them. Natacha isn't designed to look scary, more she has the appearance of someone dressing up in a witch costume for Halloween, but she certainly doesn't come across as nice in the slightest. This comes to the detriment of her character. While later on towards the film's finale there is a backstory provided for her, for the most part she is a kid version of a bad guy, bad for the sake of being bad without any concrete motivation for being so. I guess looking deeper it could be a comment about how sometimes people who are abused end up becoming abusers themselves but this evil for evil's sake element left her feeling a bit one dimensional.

With the plot revolving around Alex needing to tell a different scary each evening I figured Nightbooks would be an anthology of shorter films. This appeared to be the case, his first story, The Playground gets its own title card, but is subsequently constantly interrupted by Natacha, while the narration, as well as the characters voices are all provided by Alex. This story takes place in its own world (looking like a polished stage play) but was never designed to remove you from the core Nightbooks plot. Over the course of the film there are three more stories with their own title cards (The Bindweed, The Cuckoo Clock and The Birthday Party) but these are all used to serve a purpose. The Birthday Party in particular tied in very much to the core story, a real world story of horror as experienced by a child, it was probably the most powerful part of the film. Outside of this element Nightbooks had a weird offshoot into Harry Potter in an abrasive scene set in a dayglo night garden. It may have felt like it belonged to a different film but it was the most psychedelic part of the film. One element Nightbooks does get right is the strong set design, it really couldn't be faulted. 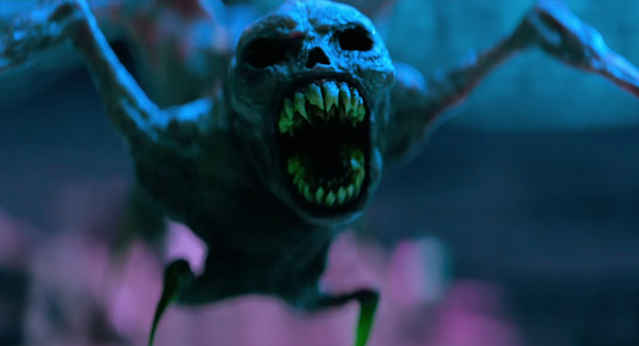 As it was a children's film I didn't expect much horror, I was wrong. There are giant skull faced bugs, a psychotic magical cat, zombie kids, an undead sorcerer, even the stereotypical image of an old crone made an appearance. These are all brought to screen with some great makeup and special effects even if this does have the feel of a Netflix film, they have a kind of clean look to them that is consistent no matter what one you are watching. I was never really sure who this was designed to appeal to, too scary for kids, not scary enough for adults, while the young protagonists would be likely to put off teenagers. Saying that though, the core message of embracing who you are rather than trying to hide it hit home a bit with me personally at the moment as that is a realisation I have slowly been coming to over the past few years.

I enjoyed Nightbooks and it looked and sounded great. What wasn't so good for me were the characters. I thought all the actors were well cast but I didn't really feel the right things for them. The antagonist didn't feel like much of a threat overall, while the protagonists were fine but didn't really make me root for them. Nightbooks is currently streaming on Netflix, it's setting of an apartment that couldn't be left maybe will resonate for people who had to stay at home for months at a time during the lockdowns of last year.