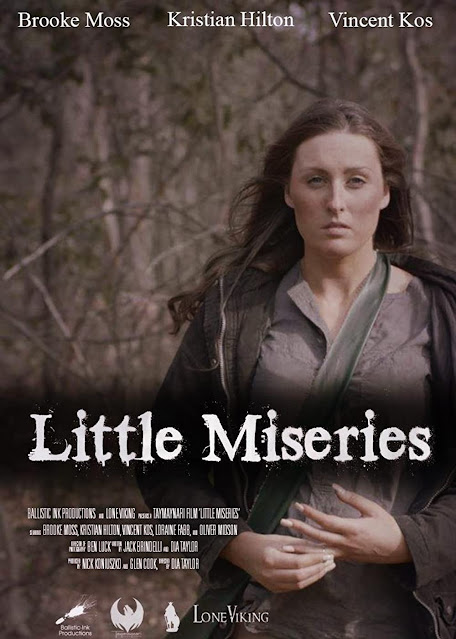 Little Miseries is a short eighteen minute zombie film directed and co-written by Dia Taylor (Blue.). It takes place in the wilderness of Australia and the setting is well established with plenty of attractive looking drone shots. The plot was one I had seen before but was paced well, for me it was the quality of the characters that brought this down a bit.

It is three or so years since a kind of zombie apocalypse swept the globe. One day apparently one third of the world's population mysteriously became undead and before events were brought under control they had eaten roughly another third of the population. Since that time Ashlyn (Brooke Moss) has been roaming remote Australia with her husband, Cole (Kristian Hilton). Perhaps the reason for her backroads rambling is that her husband is a zombie, kept in check with a chain and regular feeds on whatever poor victim they happen across.

This short seems to be either be a remake of an earlier one (Hungry, Cole?) or at least set in the same universe as feature the same character of Ashlyn. As a stand alone short it achieves a lot in its runtime. Starting with a (hard to hear) radio broadcast that sets up the post apocalyptic world, the viewer is brought up to speed quickly. It is quickly established that Ashlyn isn't deluded into thinking her husband is still alive, but her motives for keeping him around aren't clear to begin with. Via a flashback sequence this plot thread gets revealed, and the motivation is made clear.

Many of the characters in Little Miseries don't have much personality to them. Everyone speaks in a measured way that meant no character really stood out. Ashlyn was an immediately unlikable protagonist and doesn't really show any emotion throughout. Other characters encountered left little impression, aside from Loraine Fabb's Cassie. This character walked and talked like she wasn't aware a zombie apocalypse had happened. I found it amusing how her character acted throughout this, and her very abrupt exit from the short was funny, especially with the zero reaction it got from the other characters. Hilton put in a good performance as the zombie, he didn't really have much to do other than snarl and chew on peoples insides but there was a nice moment where there was a juxtaposition between him eating as an undead and maybe what his viewpoint of the situation was.

While the story wasn't that complicated there was a good three act structure to the short showing that the pacing was satisfying, and the inclusion of a flashback sequence worked well. I was never exactly sure what the rules of the undead in this world were. The flashback sequence included a scene where Ashlyn is calmly wandering through a handful of zombies without any concern so maybe they are typically not violent? With some better dialogue, or at least more relatable characters Little Miseries would have fared a bit better, as it was though it was an entertaining slice of zombie fiction helped in no small part by its setting.