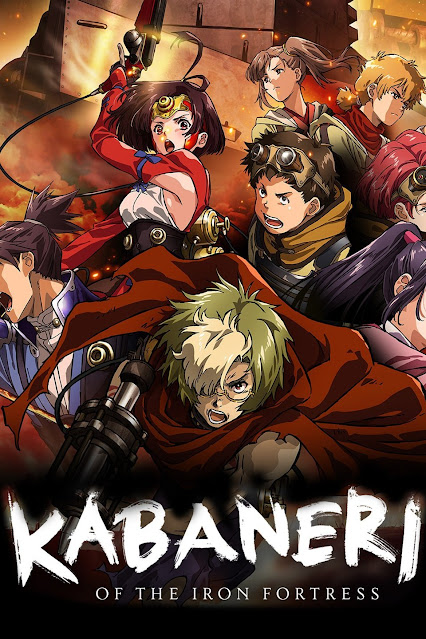 It's been a while since I watched any anime, mainly because I'm always forgetting my Crunchyroll password! Well, I reset it yet again and decided to check out the zombie anime Kabaneri of the Iron Fortress. The show shares many similarities with Attack on Titan, both with the apocalyptic vision of the world as well as a mistrusted main protagonist. I watched the original Japanese version rather than the one with English dubbing.

The show takes place in a post apocalyptic steampunk version of feudal Japan. While it is not told in the show the synopsis says that at the onset of the industrial revolution a zombie outbreak suddenly occurred. These zombies, in the show called 'Kabane' soon overrun the entirety of Japan. The human survivors exist within towns and cities that are ringed by huge insurmountable iron walls, and they travel between these settlements on large armoured trains. One day the Kabane manage to invade the settlement of Aragane Station, in the process a young inventor named Ikoma is bitten and infected. He somehow manages to stop the spread of the infection by a device he straps to his body. The survivors flee the doomed station aboard the Kotetsujyo. It is here that Ikoma discovers he is now a Kabernari - half human/half zombie and that another person, the young Mumei also is one. Mistrusted by the other passengers and the crew of the train they all travel onwards to the capital city. As is always the case it soon becomes clear that there is more to fear than the Kabane... 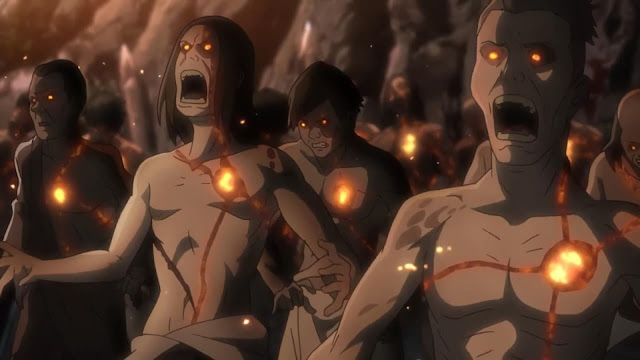 The anime is made up of twelve episodes, the majority of them take place on or around the train (the titular iron fortress I guess). It is neatly split into half, the first six episodes have humans versus the zombie creatures. It culminates in the excellent two parter of Inescapable Darkness and Gathering Light. The second half of the season picks up on the familiar trope of other humans being the most dangerous thing in a zombie infested world. A villain emerges whose motive is that weak people deserve to die, and it is only the strong who have a right to live. I won't spoil who this villain is, but it wasn't that much of a surprise as the reveal happens within half an episode of this character first appearing.

The comparisons with Attack on Titan are not hard to see. They both take place in a world in which humanity struggles to survive against a vast horde of enemies, a world where they live within walled cities. They also feature a protagonist who becomes what he hates most. Eren in Attack had the power of the Titans within him, here Ikomi has the power of the Kabane inside him. Both characters are driven by the pursuit of the destruction of their enemies. The world of Kabaneri is very bleak and it doesn't shy away from showing violent scenes of people being killed both by humans and by the zombies. Even children are not spared here with their deaths occasionally shown on screen, and even when they aren't it is very implicit as to their fates. It took a fair while to really start to like the characters, I disliked their nasty treatment of Ikomi for much of the show. By the finale episode, Iron Fortress my mindset had changed. Ayame, the princess, and her samurai sword wielding bodyguard were both cool characters, but it was more minor ones who became my favourites. The driver of the train is a pink haired muscly woman, loved her, and there was a member of the crew who speaks in an American accent, he was another very minor character I loved. The main cast were all good, with the exception of Mumei, I get she is a teenager but she was very easily deceived and it always took her a painfully long time to ever realise her gullibility. 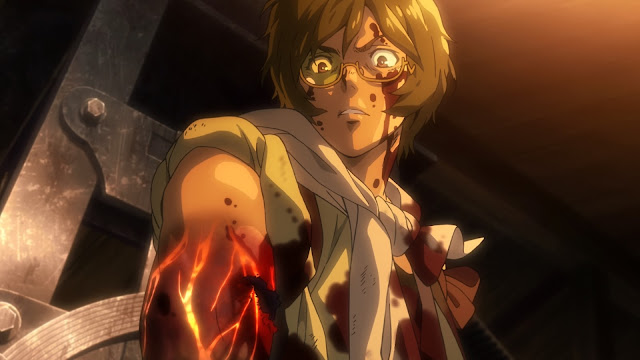 The Kabane are constant but they take a backseat to the more human story going on. The overarching question being if people who are seen as weak deserve a chance to become strong through their actions. The zombies in the show are different in that their hearts are protected within iron cages that grow around them, it makes killing them very difficult for the typical person as a weapon has to be powerful enough to destroy the cage. There are also different types of zombies shown, ones who remember the skills they had in life and so can wield weapons and fight, and the great 'Black Smoke' which is a huge monster made up of thousands of Kabane. The later creature plays a pivotal role at various points in the season.

Kabaneri of the Iron Fortress was a bleak and bloody anime that had plenty of scenes of zombie violence. I felt it maybe took a while to get to a stage where I liked the characters, and the second half becomes more predictable, yet this very depressing world was shown with wonderful animation and with a fitting soundtrack, and the world it showed was imaginative. This is currently streaming on Crunchyroll.