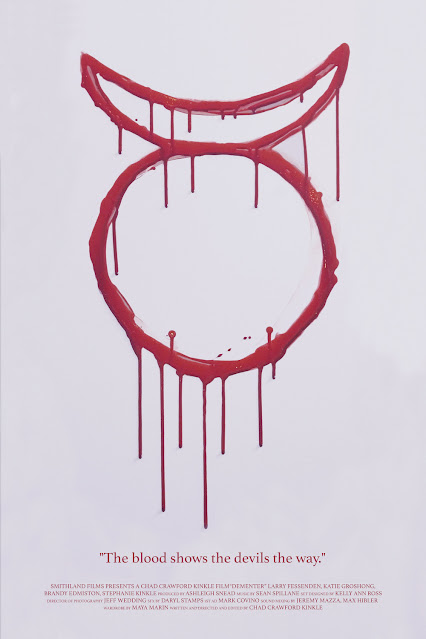 Dementer is a horror film that was written and directed by Chad Crawford Kinkle (Jug Face). I had heard of Jug Face previously, if only for the memorable name, and now having seen the director's latest film I am definitely going to check it out. Dementer is a horror film with a difference, that difference is that the majority of the film takes place around real life special needs adults, specifically Kinkle's own sister, Stephanie who has Down syndrome. Kinkle says of her inclusion "[it] gave me the opportunity to bring my sister into my world while I explored hers. As I edited the film, I realised that I had created a movie experience that I'd never seen before."

Katie (Katie Groshong - Jug Face) has in the recent past escaped from a remote backwoods cult and is now trying to get her life back on track. She gets a job working with special needs adults and is determined to do a good job. When Stephanie (Stephanie Kinkle) one of the people under her care starts to get mysteriously sick, Katie resorts to the rituals she was taught when in the cult in order to try and save her. 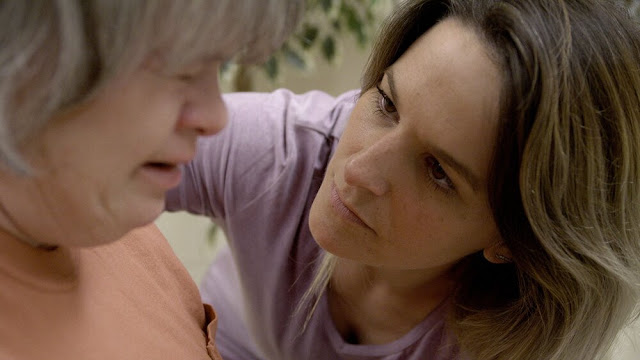 What makes Dementer so persistently chilling is the fantastic soundtrack by Sean Spillane, this sinister music has simple rhythm at its core and makes all the scenes ooze with hidden malice. Katie's story is never presented to the viewer in a clear and concise way, instead through Dementer there are almost arthouse style flashback sequences that show her dark past. We see her naked running through a field pursued by a truck, stood in the dark around a burning fire, and most pointedly being taught by the cult leader (Larry Fessenden - Wendigo). It is his voice who opens the film with his creepy counting to thirteen, it is his voice that haunts Katie, his whisperings and lines of dialogue are inserted throughout the movie. Katie may have left the cult but its influence has certainly not left her.

For much of the film I was baffled as to what was going on. Not a fault of the writing, instead you are expected to piece together the events. I spent much of the run time trying to work out if Katie was actually a secret antagonist, rather than the protagonist she at first appeared to be. Her strange behaviour, which includes leaving a cow heart under Stephanie's bed, and animal sacrifice had me wondering if her reason for working with special needs adults was more nefarious. Despite the overt supernatural feel there is actually nothing whatsoever shown on screen to confirm this has anything to do with demonic forces. There is plenty of evidence going on to suggest that Katie herself is traumatised and may be seeing evil where none exists. This can be evidenced by the frequent PTSD flashbacks she has in which she sees herself back at the cult compound. 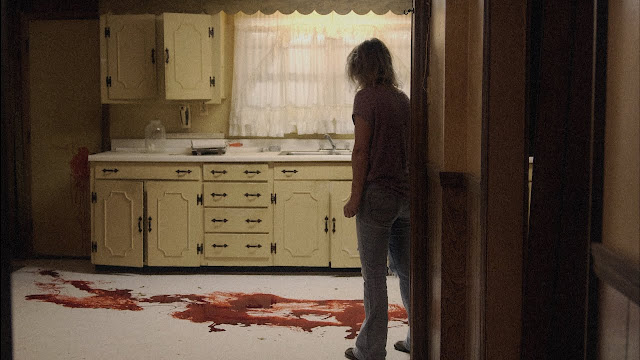 Much of the eighty minute run time has Katie with the special needs adults, all of which play themselves. I though Groshong put in a wonderful performance in what must have been a difficult role to act out. The kind way she speaks to the other characters, while maintaining a troubled feel about her gave this a believable feel, helped in that I was never sure just how aware a lot of the cast were that they were actually in a film. I feared exploitation of these special needs people but actually with Chad's personal connection to this world it felt more like inclusion. Their roles here are respectful ones with little desire to make them the focal point of any horror going on. The camera style feels very close and personal, and often the camera sways around rather than being steady, giving a fly on the wall feel to watching the events play out.

If I were to describe in detail the plot of this film to anyone it wouldn't sound like much at all. Taken on its own the story is extremely simple, add in the superbly sinister soundtrack and the frequent nightmarish flashbacks and you have a cult film that stands out. As the end credits roll to the ambiguous ending I was first mystified, but then became appreciative of just how much atmosphere had been created with so little. Demented is released on the alternative streaming service Arrow, 1st October. Dementer + Jug Face limited edition Blu-ray is released by Arrow Video on October 4th.

Posted by Daniel Simmonds at 09:23