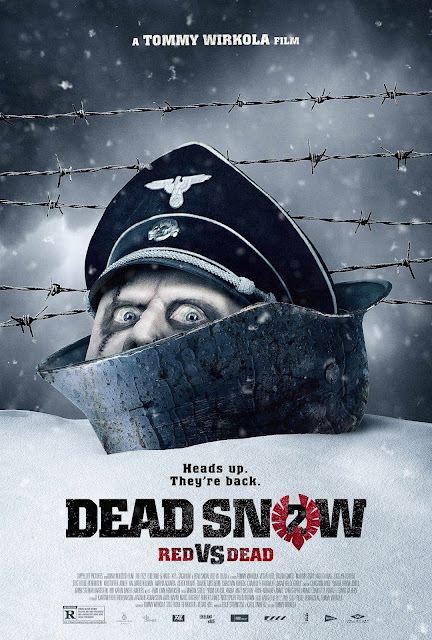 Tommy Wirkola's (Hansel & Gretel: Witch Hunters) Dead Snow stuck in the mind for a few reasons. The first was that its snowy setting led to plenty of lovely looking moments of the blood contrasted with the white of the snow. The second standout part were the Nazi zombies, there have been enough films like this over the years that the Nazi zombie is a definite subgenre of the zombie genre itself. I haven't seen Dead Snow since 2010 and so after a quick read of the Wikipedia plot guide I headed into this one. Spoilers for the first film will follow.

Despite it being five years in real life terms, within the context of the movie this picks up immediately after the cliff-hanger ending of the first. After his friends are slaughtered up in the mountains after inadvertently angering a group of cursed Nazi zombies, Martin (Vegar Hoel - Dead Snow) is the sole survivor, and after returning the gold him and his friends stole thinks the horror is all behind him. However it turns out he accidentally hadn't returned all the gold and the commander of the Nazi force, Herzog (Ørjan Gamst - Dead Snow) attacks him in his car as he makes his escape. Eventually Martin looses him, but passes out and crashes the car. Sometime later he wakes up in hospital where he is told he is under arrest for the murder of his friends, not only that but the doctors mistaking Herzog's severed arm for Martin's missing arm (that he lost in the first film) have attached it to him. As Martin struggles to control his undead and very powerful new appendage, Herzog is suddenly reminded of the last orders he received back when he was alive; to march on the nearby town of Talvik and kill all its inhabitants. Raising a new army of the undead he sets out to do just that. 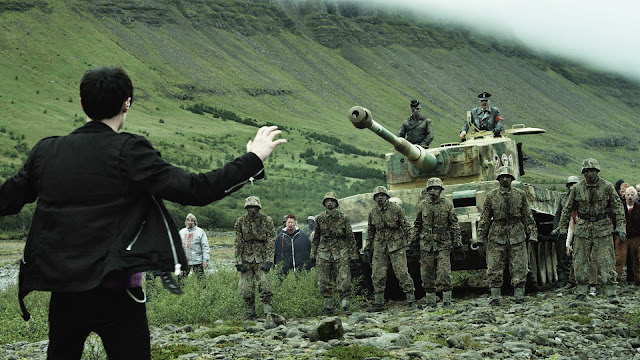 The body count this time around is a lot higher, the amount of zombies is also a lot higher. That's what sequels often do after all, make everything bigger and more spectacular. You have that here in the form of a tank that the Nazi zombies are using, that and both Martin and Herzog gaining the ability to raise the dead. Leading of course to a big bloody showdown between the two sides. I remember the first film being bloody and here is no different. Poor Martin spends almost the entirety of Dead Snow 2 caked in blood. Civilians are killed all over the place and not just limited to adults. Death here is almost always played for comedic effect, and so dark humour such as some mothers pushing prams getting obliterated by a tank shell, a tank riding over some children playing in a sand pit, and the politically incorrect sight of a wheelchair bound woman's carer running off and leaving her to ineffectively attempt to escape are not as grim as they may sound. The humour goes all over the place being both physical and with the dialogue of the characters. Some of it works, such as the poor zombie man that Martin first resurrects constantly getting damaged (at one point he even puts him under the wheels of his car after it gets stuck in a snow drift in order to get traction). Elsewhere, most notably with some of the dialogue this doesn't fare as well. There are a trio of American characters who are geek caricatures, one whose dialogue mostly revolved around Star Wars lines was a bit grating. I must mention the comedic highlight of the movie, Martin has gone to a World War II museum to get help from the museum clerk when they find out the Nazi zombies are there. In a scene taken straight out of Scooby-Doo, the two decide the best thing they can do is disguise themselves as part the exhibit. This leads to a wonderful scene of the two standing still like statues, the museum clerk for some reason having chosen the awkward pose of crouching down with a shocked expression on his face, while pointing his finger out!

There are a huge number of characters in this movie and there are various plots going on at the same time. You have Herzog and his journey to Talvik and all the things that happen along the way, you have some of the American characters and the poor museum clerk off doing their own mission, and then Martin up in the mountains trying to get followers for his army. Elsewhere in the most throwaway sub plot you have the comedically inept local Police force whose commander is determined to make a name for himself by capturing Martin (believed responsible for most the mayhem happening) before the federal authorities arrive in town and take over. There are lots of characters but with a simple plot it wasn't easy to get confused. 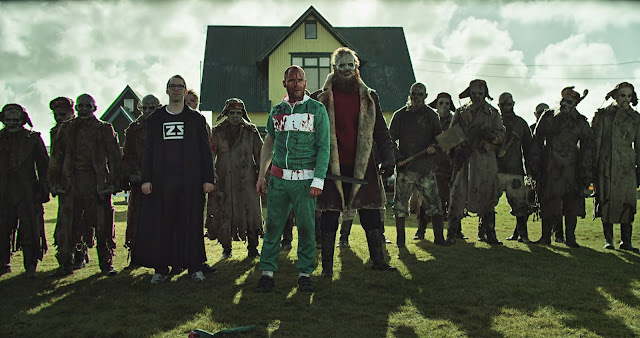 Special effects are strong throughout and are used to sell the over the top violence and gore. There are plenty of moments of intestines getting pulled out of people, both living and dead, whether it gets used to funnel petrol from a coach to the tank, or if they get draped over electrical lines to shock the undead, it's inventive. There are also a lot of effects that don't focus on body parts, such as a cool fight scene in which a character is being thrown through walls, at one point even chucked through the ceiling before reappearing rolling down the upstairs stairway! It is all consistent and was a highlight.

Dead Snow 2 is more of the same only more so. Personally I missed the snowy setting of the first film, the blood and violence doesn't look as good when transported to non snow settings. Elsewhere I found the story to be even less involving than the first film. The feeling of grander scale is believable but the horror element felt more removed, the black comedy injected a little bit more slapstick. If you were a fan of the first film then this is well worth a watch, but just about not as good. Dead Snow 2 is currently streaming on Shudder.