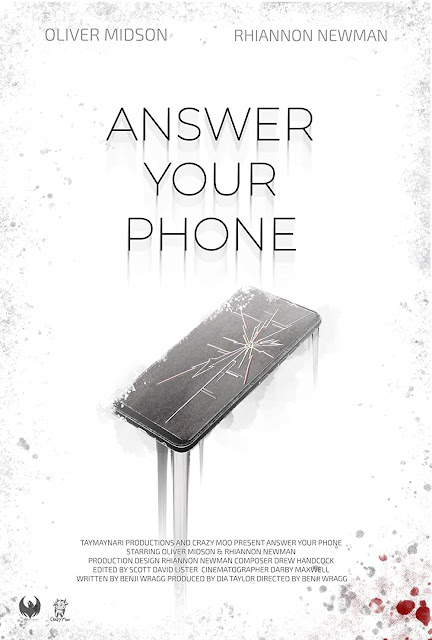 Answer Your Phone is a short horror film that clocks in at just under six minutes. It was written and directed by Benji Wragg (The Ballad of Captain Vengeance) and uses the format of horror to look at real world horrors. I was only made aware of this one yesterday, benefit of being off work in my day job meant I could jump straight on checking it out.
Greg (Oliver Midson) is an awkward looking young man who late one night is heading home after visiting the library. After receiving concerned text messages as to his whereabouts he starts to hurry, and begins to think that someone or something is following him,
This short is an obvious analogy for being in an abuse relationship, a conclusion that I came to before the confirmation in the synopsis that stated as much. While Answer Your Phone has all the trappings of a horror film this horror can be seen as all imagined within the mind of the stressed out protagonist, with time discrepancies showing on the protagonists phone it could even be inferred the whole short took place within a nightmare. The plot is simple but follows a natural progression. Thankfully the final ending shot wasn't a darn jump scare, I always think it is lazy filmmaking to end a short that way. There is instead a quickly edited sequence that worked a lot better.
What I liked about Answer Your Phone was its commitment to horror, you have sweeping almost Evil Dead style pursuing camera movements, a lovely score that is forever working at building up anticipation, a decent choice of locations and some effective editing. Answer Your Phone can currently be seen on YouTube.
SCORE: