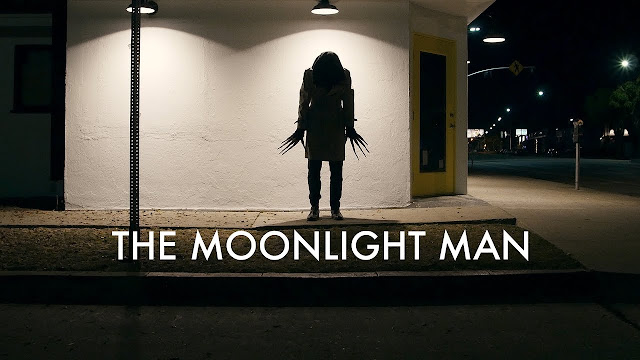 Due to being away on a short vacation I decided to watch a bunch of short films for review so that I had some posts stored up. The Moonlight Man is a short horror coming in at under three minutes. Written and directed by Danny Donahue (Vermin, Grin) this doesn't try and do much to set itself apart from the crowd.
Late at night a young woman (Casey Fichtner - Vermin) is walking back to her car when she notices the shadowy figure of an odd looking man (Phillip Kreyche - The Creep). Fumbling for her keys she drops them and as she struggles to find where they have gone the moonlight man gets nearer...
I've seen this type of horror film many times before, that of a lone woman on an isolated street at night being stalked by a male figure. Horror films are a mirror to the fears of our reality and it can't be denied that take away all the make-up and costume design of the titular monster character and you would have something that felt more real. That doesn't mean that this was too effective however, while it was good the monster was kept out of sight for the most part it was still obviously a man dressed up in a costume and not an actual monster, so much so I wondered if that would turn out to be the case within the film. The horror aspect was a miss for me but this was still competently made, and this gets a shout out for resisting the urge to finish on one of those lame jump scare endings that so often plague short horror films.
Despite any misgivings I had as to the originality of The Moonlight Man there isn't much excuse for not watching it, at under three minutes it doesn't have time to be anywhere near to outstaying its welcome. Outside of its lack of surprises this wasn't that bad a film, good enough that a sequel was made to it in 2017. The Moonlight Man can be seen on YouTube.
SCORE: