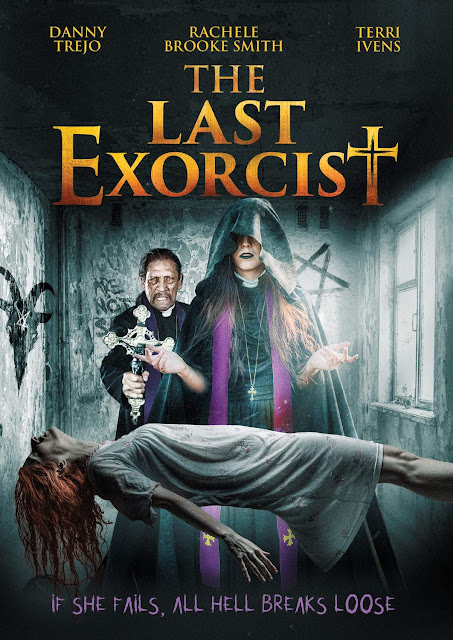 The Last Exorcist is a demonic possession film that bizarrely manages to add elements of Star Wars into its mix. Directed and with a screenplay written by Robin Bain this provides a female take on the genre, but the indie budget and some random elements mean that the pieces don't quite come together, especially in the strange finale.

Father Peter (Dennis LaValle) of the Catholic church is killed, along with a load of other priests in a Satanist led terrorist attack at an exorcist convention that apparently the world's entire population of exorcists were attending! Jo (Rachele Brooke Smith - Iron Man 2) saw him as a father figure and with his death she begins to experience strange visions relating to her childhood. Meanwhile, her alcoholic sister Maddie (Terri Ivens - Coven) begins to behave more erratically and soon Jo fears a demon has possessed her. With the help of a former priest, Marco (Danny Trejo - 3 from Hell, Machete) who attempted to help in the exorcism of her mother as a child, Jo realises she must become an exorcist, the world's last exorcist, in order to free Maddie from the evil within her. 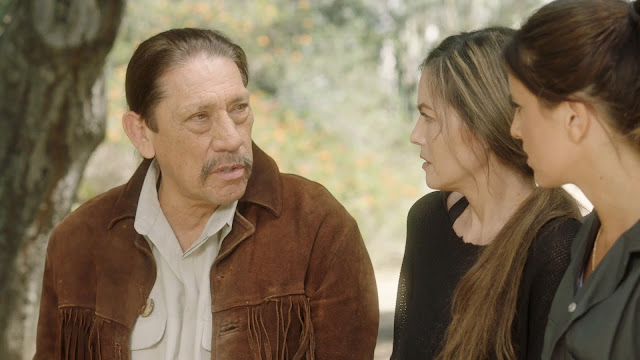 I do like a good possession film, I also don't really mind bad ones as long as they put some energy into their creation. The Last Exorcist is a strange beast, there are scenes of perhaps demonic possession but the meat of the film is dedicated to Jo and the slow understanding of events from her youth. Jo herself was a fine enough character, if a little bland, her sister however didn't fare as well. Ivens seemed to be channelling the over the top stereotype of an alcoholic, lurching around her scenes, her character flitting between over the top flirting and angry outbursts as she slurs her lines. Adding in the possession angle and things become a little bit cringe. This movie sees possession more as relating to mental illness, in this case alcoholism, with Jo and Maddie's mother also being an alcoholic. There was however a deeper supernatural part to this that points to a definite root cause. It was nice to see the iconic Trejo here, I expected a tiny bit part from him, initially that seemed to be the case. Thankfully he makes a reappearance for nearly the entirety of the film's third act, while he doesn't really do much other than stand around talking he made the film a lot better than it should have been.

The Last Exorcist has a mellow tone that leads to not much going on. It becomes all the more jarring that during the finale Jo suddenly turns into 'Jo the Demon Slayer'. Out of nowhere she suddenly gets in a fist fight with a possessed man, roundhouse kicking and cartwheeling, this was such a completely bananas sequence. With how serious things that been up to this point this scene came out of nowhere, it felt to be like one of the comedic endings to the 'choose your own adventure' film Black Mirror: Bandersnatch when the protagonist there gets in a wild fight with his therapist. I mention this due to how much it stuck out like a sore thumb. The special effects throughout are not great, there is one part where a man spontaneously combusts that looked so bad thanks to the CG used, that I thought it was a dream sequence or something, that is until people around him finally started reacting. It is a combination of poor effects and abrasive plot decisions that really hampered the flow. Add to that Star Wars 'force' style abilities, such as Maddie able to move objects around with her mind, and Father Peter at one point literally appearing as a 'force' ghost and it becomes increasingly hard to take The Last Exorcist seriously. 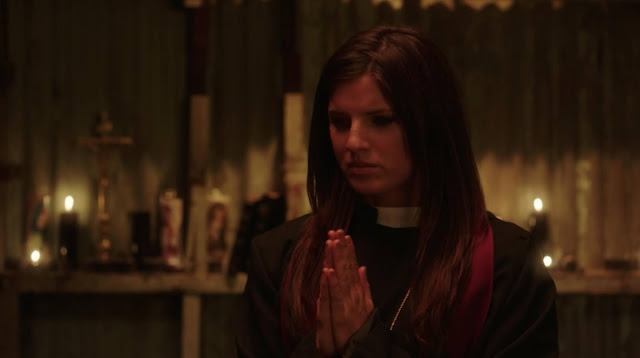 While not overly terrible, the discordance with the tone had me wondering if this secretly meant to be a comedy. The demonic possession part is somewhat sidelined in order to push the more dull awakening of Jo to her destiny. Lacking in much horror and with a very low stakes story, this was easy enough to watch but it didn't leave much of an impression. The Last Exorcist is due for release on 4th October thanks to High Fliers Films.