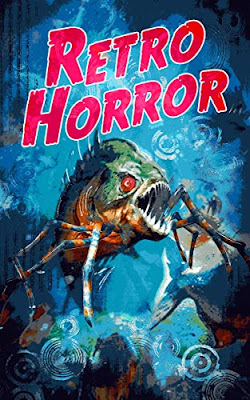 Do you know how hard it is to Google a book titled Retro Horror? Pretty darn hard it has to be said, which I discovered upon trying to research this horror anthology book that was released in 2020. Retro Horror brings together twelve different short horror stories, each one from a different author, published by Nightmare Press. Anthologies usually have a theme and for this one, as the descriptive title might suggest this one is retro feeling horror stories. The quality here varies a little bit but for the most part I enjoyed them, there were some I think could have been tweaked, but even the weaker ones fitted the theme well with none feeling out of place. Even better though is that there are a couple of real gems here.

Retro Horror opens with Gregg Chamberlain's One Monster King to Rule Them All, this happened to be my least favourite even if it is one that really fits the retro vibe. Here we have a comedy about a show in which the most notorious monsters of the world get voted on to see which comes out the best of all time. This had a 1950s/60s vibe to it with the characters and creatures all feeling very cartoon like.
The Mouth of the Deep by Stanley B. Webb on the surface should have been great. The only sea based story this had a small ship attempting to retrieve precious cargo from a sunken ship that is guarded by a giant octopus. The way this was written felt slightly weird to me, the claustrophobia and fear of diving in dangerous waters was diluted by the way characters would flit from ship to wreck within the space of a few sentences, this killed a lot of the atmosphere for me.
The Trails of Dr. Rains felt like an old fable. Written by Matthew M. Montelione, this had a rich girl whose parents restricted her to the house and its gardens, but who is tempted away into the nearby forest. It wasn't bad but didn't leave too much of an impression.

Mothsquito was one of two stories that had monsters that sounded like they came straight out of old style B-movie films. This one, written by Pedro Iniquez had a film crew out in the desert encountering the titular abomination. I really liked the setting, and for how the story went along.
Pirantulas! by Angela Yuriko Smith was the second animal mash-up. In this one a group of students encounter the horrific mash-up of creatures at a remote river, just as darkly humorous as Mothsquito.

I had hoped for at least one classic old school zombie story and we get that here with Kenneth Bykerk's Puddle of Mud: A Tale of the Bajazid. Again in a remote location (this time a muddy creek by an abandoned mining town) this was just a solid short story zombie tale, plenty of rotting dead, plenty of deaths and all told in a very appealing and visually satisfying way.
A zombie story with a difference comes with Sloth Zombies by Jenny and Jacob Floyd. Many of the stories here come with titles that are quite fitting, here obviously is no different. Huge undead sloth monsters invade a small town, at the command of a woman who bears a grudge against the townsfolk. Lots of violence here, my only complaint being the ending which felt a bit abrupt.
Dippel's Monkey by Gordon Grice is a cautionary tale that has a scientist transplant the brain of a man he killed into a monkey. I liked how over the course of the story this threat becomes more and more of a problem, fun ending here also.
Unhallowed Evening was a modern day retelling of the classic Frankenstein story, this written by R.C Mulhare. Having it set on Halloween (with scientist Victor and his assistant constantly being interrupted by trick or treaters) was a great idea. I also thought the slight twist as to the nature of how the story was being told was cool also.

Hunting the Goat Man was Pamela K. Kinney's entry, it wasn't bad but felt like it could have benefitted by having some segments lengthened a bit. Again with this one the clue was in the title.
That leaves the two best stories to be found in Retro Horror. Crypto Cage Match was the real gem here and come right in the middle of the book. Written by William D. Carl this has a D.J hired to provide the music for a highly unusual cage fight taking place in a clearing in a dense forest. With a little alteration this could have been a modern day H.P Lovecraft tale. This was wonderfully written, and by far the easiest one to just see play out in my mind as I read along.
The final story in the book is K.J Watson's The Maze, this felt the most traditionally horror like, written to chill the reader. A man is hired to chronicle a library at the remote home of an old woman. He discovers a book that sheds horrific light on the blood red hedge maze growing alongside the property he is staying at.

Retro Horror was a neat collection of horror stories, there wasn't a badly written story to be found among them while there was enough variation to make each feel unique. Even the ones that were kind of similar in tone were spaced out well enough for this not to be an issue.