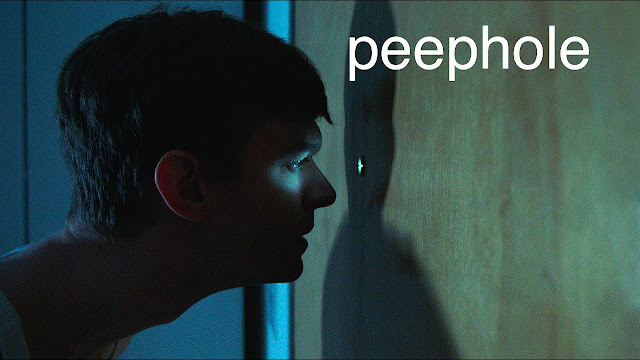 With short horror films there always seems a compulsion to end them on the most obvious way possible. Something which I guess at one point was surprising becomes almost like a full stop to these type of short films. Peephole, written and directed by Jaron Henrie-McCrea (Curtain) is, for 98% of its run-time really quite excellent, however it doesn't quite stick the landing.
A young man (Tim Lueke) wakes up one night in his apartment having falling asleep in front of his TV. Just after noticing a jauntily themed creepy puppet show is playing he hears a knock on his door. Looking through the peephole he notices a man leaning forward with his back to him. He soon comes to realise that whatever movements he makes the man through the peephole makes them too, which causes him some enjoyment. However, this becomes short lived when the tables are turned...
This was mostly fantastic, everything was perfect for a good portion of this. Opening on a black title card and you already have the jaunty, yet slightly sinister old timey music playing. The sound effects throughout are great, the knock on the door crisp and loud, dialogue free due to the character being on his own, and even use of silence to increase the horror moments. The cinematography is also strong, especially the fisheye view of looking through the peephole, the stop motion like effects near the end were very freaky looking and I loved how the lighting plays with the shadows in the room. Nothing bad can even be said of Lueke, he was fantastically cast and it was easy to follow along with his emotions over the course of the three minutes forty short film.
As I said at the start of this review Peephole sadly doesn't stick the landing, and it really is sad as up to this point everything was amazing. If you've seen even a few short horrors in recent years I'm sure you can guess that a jump scare may be involved. A well placed one can be effective every now and again, yet sticking them at the end of a short film is so overused and so obvious that they lose all impact, leaving Peephole to end on a bum note. If you can look past the ending this is a great little short horror, going by this I would be interested to see Henrie-McCrea's future work as the directing is spot on. The film is on YouTube so it is worth a watch.
SCORE: