Old is the latest film from M. Night Shyamalan (The Visit, The Sixth Sense) and was based on a French graphic novel. I have decided to duck out of visiting the cinema regularly this year so haven't kept up to date with new releases. It was only due to my sister going on about wanting to see this, and then my father coincidentally getting gifted some free cinema tickets that I ended up going. Shyamalan has somewhat of a chequered past, for every Split there is a Glass, and sadly this one falls into the wrong side of his output. While the idea behind it is good the execution was less impressive, some bad casting choices and an overlong run time made this into more of a chore than it should have been.

Guy (Gael García Bernal), his wife, Prisca (Vicky Krieps) and their two young children, Trent and Maddox have gone away on a vacation to a holiday resort that Prisca discovered online. The day after they arrive the friendly resort manager (Gustaf Hammarsten) tells the family he can take them to a secluded beach away from the rest of the other guests, something he only offers to the people he takes a liking to. They, along with another family, consisting of a doctor called Charles (Rufus Sewell - Dark City), his younger wife, Chrystal (Abbey Lee), his elderly mother Agnes (Kathleen Chalfant) and his young daughter Kara are taken by van across the island to this small beach that is surrounded by craggy cliffs, with the promise of the van driver being back to collect them at five. At the beach they meet another couple, Jarin (Ken Leung - Lost) and Patricia (Nikki Amuka-Bird - The Omen) as well as a young man, a rapper called Mid-Sized Sedan (Aaron Pierre). All is going well until the discovery of a dead body, with no phone reception one of them tries to leave to get help, only to wake up back on the beach after having blacked out. It soon becomes clear they are trapped on the beach, however they try to leave they end up waking up back on the sand after having blacked out. This is followed by an even more darker discovery, all of the group are advancing at a hyper accelerated rate, as the older adults begin to die, and the children change into adults, all wonder just how they are going to be able to escape their strange fate. 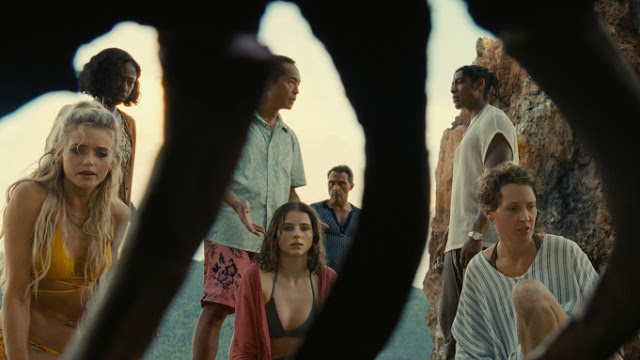 Shyamalan has the unfortunate pressure of always being expected to have a great twist ending and with Old I can't say it was one of the better ones. Of course I can't reveal it other than to say I got an accidental vague spoiler prior to watching it, but I think it was kind of meant to be obvious anyway. The concept of disparate strangers trapped on a beach while rapidly aging was certainly interesting. Unfortunately the setting itself led to a lot of the boredom. Aside from the first ten minutes or so nearly the whole film takes place on this small slip of featureless land. Despite everything thrown at the viewer to keep their attention I was getting quite bored by the end, even if that contains some of the more horrific moments. Old is nearly one hour fifty in length, truth be told I think a ninety minute run time would have benefitted this a lot more. The movie had the annoying habit of having characters react to something the viewer can't yet see and then ever so slowly revealing it to the audience. This just about worked the first time but by the fourth or fifth time it became quite annoying. Sometimes things really are left to your imagination (such as the discovered corpse later having completely decomposed).

I don't know if it was the cast or if it were the characters but there were not any likeable ones among them. There is a lot of shouting and screaming and people reacting stupidly to things that made me want to speed up their inevitable deaths. On that note this does have a body count, and not all of them down to the rapid aging. This is where Old shows the strengths of its ideas, such as a scene where a character has gone crazy and is slashing at another character, the injuries sustained instantly healing into scars due to the sped up time effect. Then there are the great body horror deaths of broken limbs instantly healing at the angle they got broken, and the sped up consequences of being stabbed with a rusty knife. For all these good ideas there are just as many silly ones, the impregnation, pregnancy and delivery of a baby within a five minute time span felt almost farcical rather than harrowing, while the old people voices that the characters put on were often terrible, especially Bernal's funny old man voice. Not all the actors were terrible though, I really liked Sewell's character, and it was of course great to see Alex Wolff (Hereditary) as the teenage Trent. 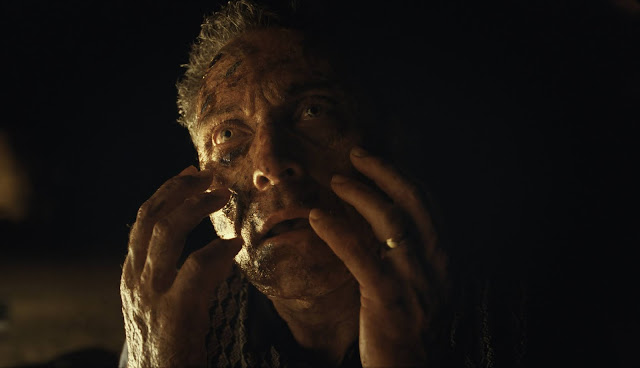 The plot in general was ok but there wasn't enough going on for the mystery of what was happening to really grip me. Add in an unlikeable bunch of characters and I didn't really care either way if any of them survived. Then there is the ending that just seemed to go on and on, including flashback sequences and actions that require a real suspense of disbelief to appreciate. Somewhere within Old lies the aging bones of a decent horror, the whole idea around the fear of aging is effective horror, but there is so much bad mixed in with the good that it can sometimes be hard to recognise the merits of the movie. If you are a fan of Shyamalan then check it out for sure, at the very least he has some interesting directing.