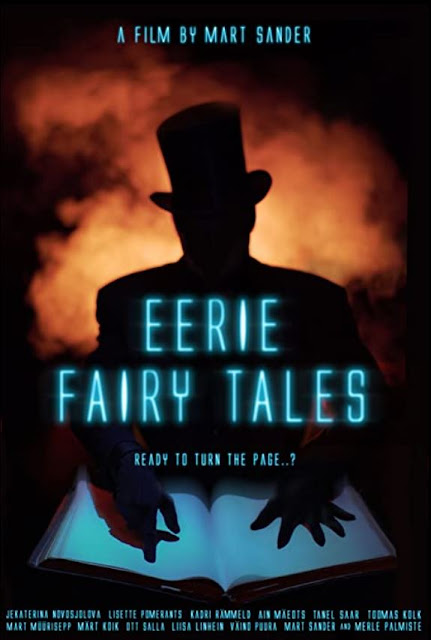 Eerie Fairy Tales is an Estonian horror anthology that combines four of director Mart Sander's short horror films into one whole. Any regular reader of this blog will know I love anthology films, variation is rarely a bad thing. Being films of Sander means that all four were written and directed by him, he was even responsible for the original music used here. There was only one short here I didn't enjoy too much, but by far the shortest that didn't really impact on my enjoyment.

The wraparound story has a shadowy figure reading from an old book of fairy tales, the pages are all blank so the stories he tells are from his mind. The first short is Actually which takes place on a dark and stormy night at a remote hotel. A mysterious woman (Jekaterina Novosjolva) appears and asks for a drink. Starved for company the bartender begins to tell her about the dark past the local area has had. As the twenty minute short goes on there is a back and forth between the two that makes you question from which one the horror is to come. There was a great atmosphere here, kind of a film noir vibe with the mysterious woman in her coat and hat. While the story didn't end up anywhere too surprising I did appreciate the ending that was open to interpretation as to what had actually transpired. 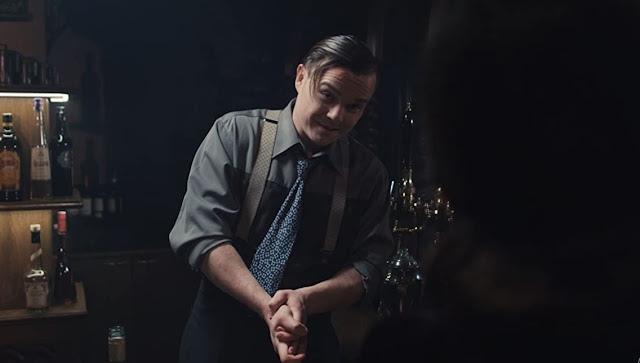 In a complete change of direction the second short, Abeyance takes place in modern day. Two Interpol officers (played by Tanel Saar and Mart Müürisepp) visit the location of a secret underground hanger that once belonged to the Nazis. They are greeted by the caretaker (Märt Koik) who discloses that the rumours of a UFO being housed there for the past 75 years are true. He also alleges that everyone who has ever seen it has immediately requested to have their memories of the event wiped due to the horrific experience. This was a real gem, the build-up to the reveal took up a lot of the time and was fantastic. Of course, the reveal itself couldn't live up to that but it was still an interesting story that had elements of a H.P Lovecraft story. There was an obvious twist towards the end, but then this is countered with a great final unexpected twist.

Again with a change in direction, the third short, The Spring of Solitude takes place in 1840. This one felt the most like a fairy tale, and at around 40 minutes long was the lengthiest short to be found here. In this one a young man, Hans (Ott Salla) goes hunting in the woods one dark night, in order to find food for his starving family. He happens across a strange spring, and the strange woman (Lisette Pomerants) guarding it. She says he can drink of the spring but that if he does he must stay with her for three nights. After the first night Hans returns home and is shocked to discover that a year has passed. Despite his family's concern he is compelled to return to the spring for a second night and then a third. This one had a good atmosphere to it once again, being set mostly outdoors there were some nice drone shots used of the woods, especially when Hans is running around in them. It felt a lot shorter than it was, and while it ended on a note that I think wasn't too surprising this had the good feel of a fairy tale to it. 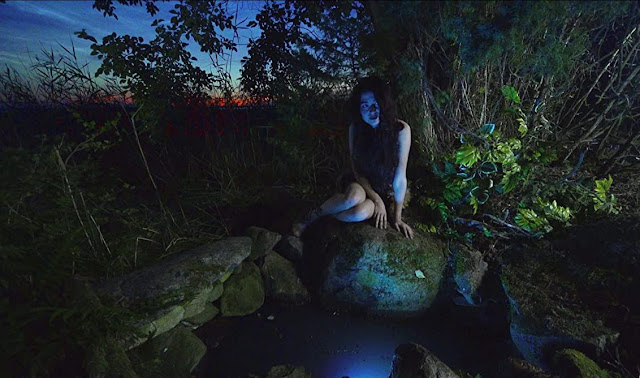 The final short is just under nine minutes and was a bit of an odd fit. The Butler Did It is a farcical comedy, in this one a man returns home to his wife to explain to her how he managed to get away with the murder of his rich aunt. Not wanting the butler to hear his confession the man switches to a different language, the farce comes from the butler always being shown to also understand the language being spoken. Over the short English, French, German, Swedish, Russian and more is spoken by the three characters. At least this one was short, and it was still well made, it just felt slightly out of place with the other more serious films.

Overall I was impressed with Eerie Fairy Tales. Much of the anthology is in Estonian but I never had a problem with the English subtitles. I thought the variety here was a strong point of the film, it helped that all of them were very well made with some decent actors, perhaps the character of Hans was a little bland, and I would have liked a stronger ending for Actually, but other than that, and the weak final short this was an enjoyable horror anthology. Eerie Fairy Tales comes to DVD and digital on 28th September from Bayview Entertainment.

Posted by Daniel Simmonds at 15:34