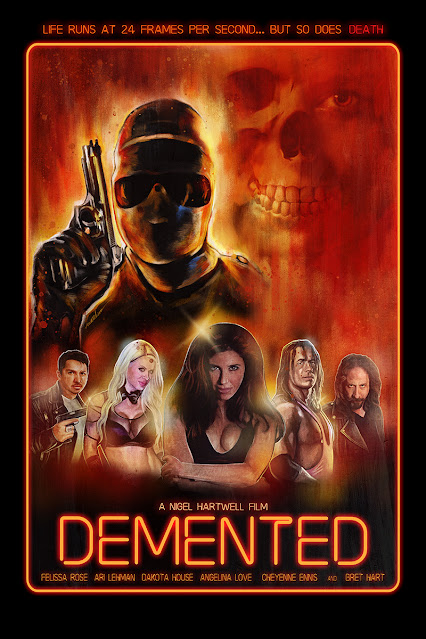 Demented is an indie exploitation horror that was written and directed by Nigel Hartwell (Insight of Evil, Dead by Dawn). The main draw for a lot of people not knowing anything about the film will be the iconic actors and wrestlers who appear. The exploitation genre isn't one of my favourites, I find them to be usually needlessly violent and misogynistic, but Demented does things slightly different by being surprisingly quite tame in what is shown.

Amanda (Cheyenne Ennis - Insight of Evil, Dead by Dawn) has gone away on a holiday with her boyfriend to his remote holiday cabin. As we know from the prologue, that has the boyfriend being interviewed by a Detective (Felissa Rose - Camp Twilight, Sleepaway Camp) at a police station, things don't end well for the woman. After a wonderful evening in which she is proposed to, she inexplicably wakes up chained to a bed in an abandoned motel, at the mercy of a chainsaw wielding sicko. Unwittingly the star of her very own snuff film Amanda struggles against her fate. Meanwhile as time passes more female victims find themselves in a similar situation with the same twisted killer. 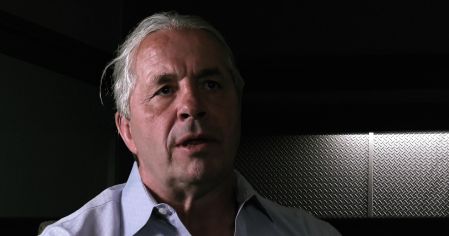 There was a screen of text at the movies start that I assumed was there just to set the scene, it was talking about the number of women who go missing each year and how some end up enslaved in the sex trade. While Demented in no way is a tenderly handled movie it does give the female victims a voice by having them in more of a pivotal role than might be expected. Exploitation usually conjures up images of over the top bloody torture and naked victims, here though in a way I found refreshing that was not so much the case. Sure, there are a lot of breasts on show, but the victims are fully dressed for the most part, rape is implied rather than shown due to both victim and attacker being fully dressed, and outside of some CG this is completely blood free. There is also the inclusion of some unexpected possibly supernatural moments that left me guessing as to what was going on.

The moments of torture feature a lot, but the aggressor is kind of pathetic, I assume this was done on purpose. He is clad in black and has a voice distorter (that occasionally made it hard to make out his lines) and for a horror film is more bark than bite. Sometimes he strangles his victims but mostly he just points a gun at them while making lame threats. This is all done in order to create snuff films but I did wonder who would want these when not much is shown. On the one hand that was good for me, I don't enjoy mindless scenes of torture, within the context of the film I couldn't really understand who would be interested in something so light. It wasn't long before the story went to some wild places. There was a unique way in which events from the past, present and future were combined, with characters seemingly flitting between the time periods. This might have been a bit confusing but this originality kept me interested to see how things would play out. I really liked the bizarre dream sequences that were filmed from a first person perspective, they added a lot of mystery. 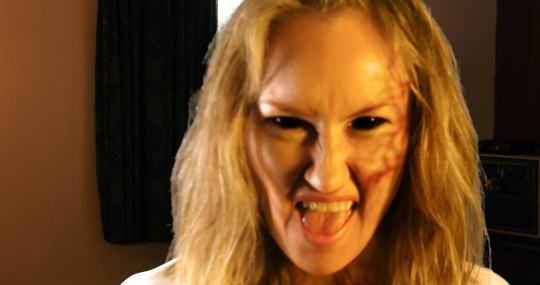 Being an indie film a lot of the acting wasn't amazing, but it was consistent and added to the exploitation feel. As I assumed the films biggest names got the smallest parts. You had iconic wrestler Bret "Hitman" Hart in a small role bookending the film as a dark web film seller, wrestler Angelina Love in an even smaller role, as well as Ari Lehman (Slutty the Clown, Friday the 13th) in an almost blink and you miss it role as the bartender at a sleazy strip club. Outside of the disappointment of no practical effects the CG left something to be desired at times, especially in the film's third act. The story was crazy but ended unfinished, with it heavily implied a sequel is to follow.

Demented was far more watchable than I expected it to be. Going into this expecting extreme violence you might feel let down. Personally I enjoyed the story much more as a result of its lack of showing much physical horror, I got quite into the low budget vibes and just let the often crazy plot wash over me in order to enjoy the low-fi fun. Demented is set to be released on Friday 13th of August worldwide on DVD/VHS/BluRay and VOD. There is also currently an Indiegogo campaign running to help fund the release of this movie, that can be found here.

Posted by Daniel Simmonds at 11:55