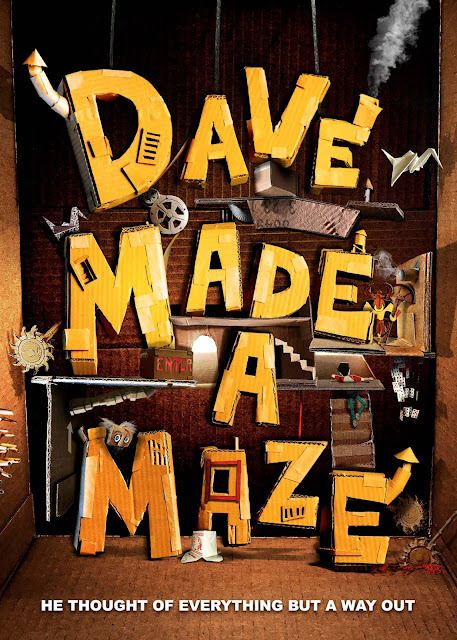 I think it may have been earlier this year when I first heard of the Bill Watterson directed surreal comedy horror/fantasy film Dave Made a Maze. I was very excited about the premise of the film and so upon seeing today that it was on Shudder I had to watch it immediately. In terms of sheer imagination it did not disappoint, there is no other film out there like this one. It has maybe the best set design of any film I have seen in recent memory. It does have its own share of problems as at one hour twenty it still feels a little overlong.

Dave (Nick Thune - The Possession of Hannah Grace) is a struggling artist who in his frustration at never being able to complete any project he starts decides to make a box fort out of cardboard in his living room. Three days later his long suffering girlfriend, Annie (Meera Rohit Kumbhani) arrives home to find Dave's creation. From within his fort Dave explains he is trapped, unable to find a way out of the cardboard maze he has created within. Warned not to either enter the maze or to dismantle it, an exasperated Annie calls up Dave's best friend, Gordon (Adam Busch - Leon) convinced her boyfriend is having some sort of mental breakdown. He arrives along with a bunch of other people that includes among them film director Harry (James Urbaniak) and his crew consisting of a cameraman (Scott Narver) and a boom operator (Frank Caeti). Eventually, everyone against Dave's warnings decide to head into the small maze. They are shocked to discover the inside is a gargantuan cardboard labyrinth, one that is full of deadly traps and which is stalked by a man eating minotaur (John Hennigan - WWE wrestler John Morrison)…

Apparently the idea behind this film was to recreate the classic fantasy films of the 1980's, I imagine films like Labyrinth and Return to Oz are two such examples. This film is a masterful creation. The premise itself is very compelling but to then have the cardboard labyrinth so well realised is genius. Everything within this is so incredibly inventive. From when the group go into the maze everything looks like it is made out of cardboard or paper, there are origami paper birds flying around, mosaics made out of playing cards, huge cardboard statues spitting out streams of paper, traps that operate via rope and cardboard cogs and gears. Each scene really does bring with it something different, heck, there is even one scene where the cast all turn into cardboard puppets! This does lead to one of the issues with the movie, even at the length it is it feels overlong, there were a few scenes that felt tangential to what was going on. A scene in the third act really brought events to a halt. For some reason Annie and Dave are suddenly in a cardboard version of their kitchen, talking utter nonsense about drinking coffee and wine as they in turn are shown to be wearing various cardboard and paper outfits. The scene added nothing whatsoever and with the high stakes story it interrupted I don't understand why it was felt this scene was needed, other than to pad out the length.

While this is a comedy there is actually a body count that I didn't expect to see. This are violent deaths with a difference though as the victims blood is represented by silly string and red paper strips. I won't go into detail on much of what happens here, but the first death has a character get decapitated, the way this scene was shot, with the stump spurting out paper all over the characters, and their panicked reaction was perhaps the highlight of the whole film for me. The main group of characters were a fun lot to follow around, I especially liked the film crew. Rarely getting tiring was Harry who would often feed the group the way he wanted them to react to what was occurring, in their bewilderment at the situation they would often find themselves complying. This led to a few humorous moments. I also loved the cameraman and boom operator who are silent for the entire movie, their over the top shocked reactions, and often refusal to interfere in the events happening also gave a lot of the comedy. There isn't much depth to any of the characters, but they sell being trapped in an inexplicable giant cardboard labyrinth well. The story is basic and isn't full of too many surprises in the over arching story but it is satisfying in its own way, especially when the stakes get raised slightly in the film's third act. 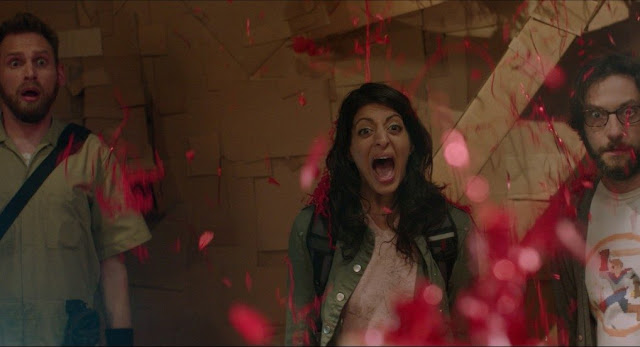 Visually Dave Made a Maze is everything I hoped it would be, I can't get over how completely awesome this cardboard maze looked, it was often bizarrely stunning. With unnecessary padding the story didn't hook me in the same way, there were a few too many unimportant characters wandering around, and it led to a stilted feel to the action. Despite its faults there really is nothing like this out there, this film needs to be seen. Dave Made a Maze is currently streaming on Shudder.

Posted by Daniel Simmonds at 05:16