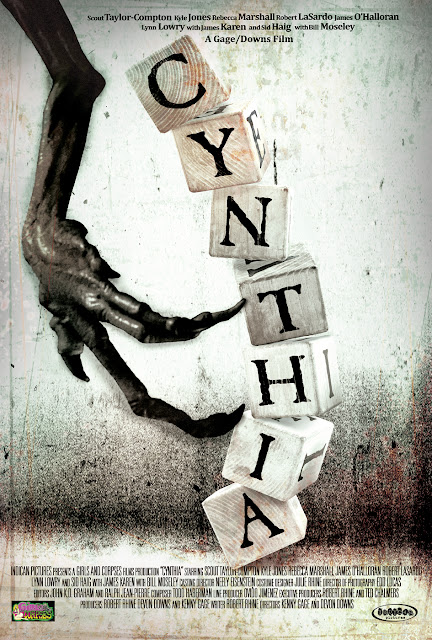 When Cynthia started and I was immediately greeted with iconic horror actor Sid Haig (The Devil's Rejects, House of 1000 Corpses) I knew it couldn't all be bad. Directed by Devon Downs and Kenny Gage (Killer Ink) with a story written by Robert Rhine (Exorcism at 60,000 Feet) this mutant baby horror follows a similar path to Basket Case and particularly It's Alive and abandons any thoughts of taking itself seriously relatively early on.

Robin (Scout Taylor-Compton - Halloween) is desperate for a baby, with her and her husband Michael (Kyle Jones - Exorcism at 60,000 Feet) having trouble conceiving and not having a lot of money they turn to a dodgy Chinese company to buy fertility treatment from. Eventually the miracle happens and Robin is overjoyed to be pregnant. On the happy day the doctor discovers a large cyst in with the baby, which he promptly throws into the medical waste. This cyst however is actually the mutated twin of Robin's baby Samantha. None too pleased with being discarded, and with a desire to be close to it's twin the mutant creature (later named Cynthia) makes it's way back, leaving a bloody body count along the way.
The relationship between Robin and Michael becomes increasingly rocky after the baby is born, not helped by the ever present Cynthia who causes chaos around their house, all the while somehow managing to remain hidden. 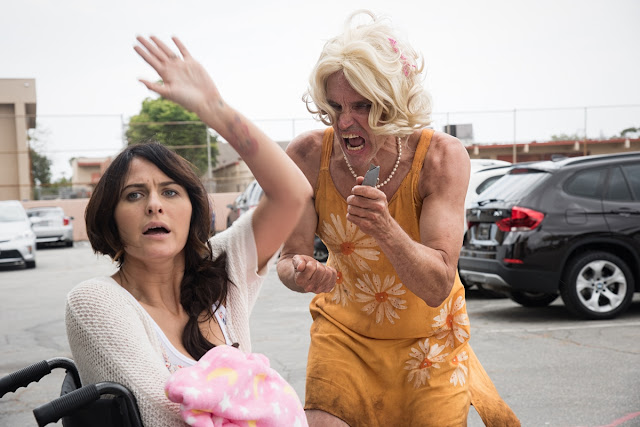 I have never seen It's Alive but know the general outline, the fact that both feature a hospital scene where a mutated baby kills staff isn't a coincidence, Cynthia is obviously inspired by that film. This horror succeeds on two fronts. Firstly it wisely decides not to try and tell a serious story. This is shown both in the way characters behave and how events play out. All characters here felt like they were from a sitcom, they react in ways that would be unbelievable were it not for the comedic way the film runs. Robin is meant to be the protagonist character here but she was hard to really like, even if she was for a lot of the run time more sympathetic than Michael could be. Cynthia takes place over the span of four years and so there are frequent jumps that take a while for the viewer to reacclimatise. The most impactful of these was a key moment at the end of the second act when the whole scope of the film changes with a revelation for one of the characters. It led into a surreal third act in which Robin seems to have gone a little crazy. There were a nice collection of side characters here, the one who stood out the most was Ben Whalen (I Spit on Your Grave: Deja Vu, Killer Ink) who played the hospital janitor. He had some great lines, I particularly liked the bit where he recounts his stereotypical life story without being asked, and his completely unfazed reaction to discovering two corpses. As pointless and short as the role was it was cool to see horror legend Bill Moseley (Gothic Harvest, Repo! The Genetic Opera) here as well. There was no need for him to even be here, but playing a cross dressing homeless man with glee, he stuck out in the mind!

Another way Cynthia succeeds is by limiting how much we get to see the titular monster. For the first act we only really see it from a first person perspective, it's demented mutterings really reminding me of the noises Gremlins make. After this it is only ever close up glimpses of the creature, or it being slightly off camera. Of course by the end we get a better look at this creature, a cool and grotesque design, made all the more surreal when it is dressed up in a pink princess outfit complete with conical hat! The film can be icky at times, some bits which were a bit gross, but the scenes of violence were always entertaining to watch, and include plenty of blood. 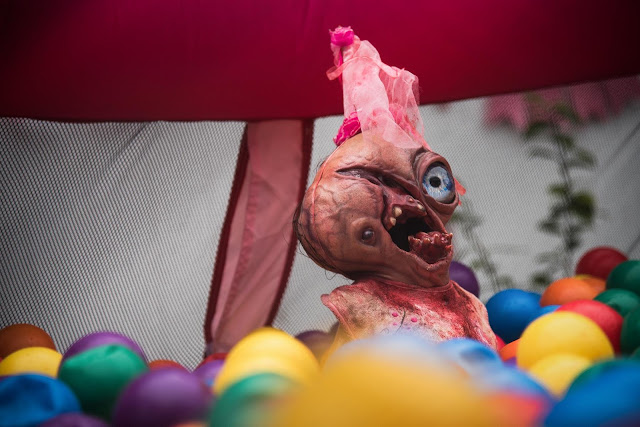 Horrors about babies are said to dig into fears parent have both about their creation becoming a monster, and also the body horror of having a living thing growing inside of you. Cynthia doesn't do much to explore these topics, but it does tell a silly story in a way that works due to the comedic nature of the plot. It might be a bit unbelievable that a killer mutant baby can somehow exist undetected in a house for so long but this wasn't much of an issue because of how entertaining the film was. It kept me guessing as to what was going to happen, it had a lot more Sid Haig than I expected after his initial fleeting appearance, and the design of the titular creature was pretty darn great. Cynthia is due out on 11th October thanks to High Fliers Films.

Posted by Daniel Simmonds at 07:39