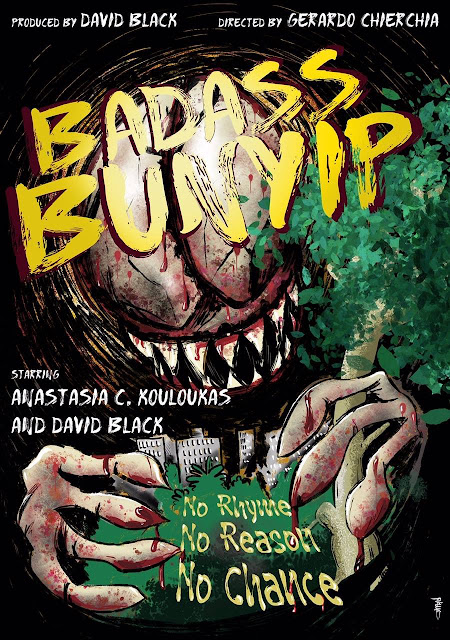 Badass Bunyip is a comedy horror film that was directed by Gerado Chierchia (Toxic Alien Zombie Babes from Outer Space) and written by and starring David Black (Sinister Symbiosis) as well as Anastasia C. Kouloukas (Sinister Symbiosis). I had only ever seen Black in short horrors before and so was interested to see how he would handle a feature film. At its heart Badass Bunyip is a creature feature, a genre that I don't have the greatest love for, mainly due to films from this sub section of horror often feeling overlong. On the plus side this has a huge body count, but I was ready for the end long before it came.

It is Christmas day in the Australian inner seaside suburb of St Kilda in Melbourne and idiotic Dazza (Black, who also plays a few other roles here) has taken his equally idiotic girlfriend Shazza (Kouloukas) for a picnic at a local park. The location chosen however is on a sacred Aboriginal site and the picnic happens to take place on the annual day that the mythical Bunyip creature heads out to kill. 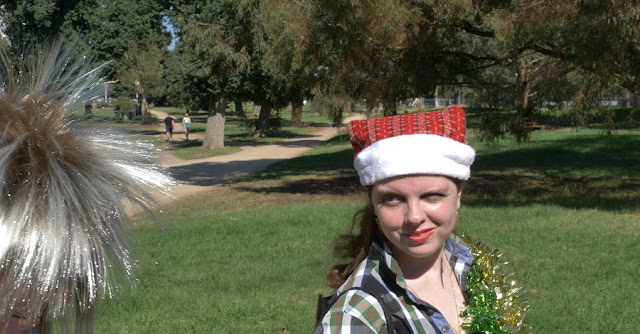 When I heard of this feature film I imagined it would be around an hour in length, so I was slightly worried to see a run-time of one hour forty seven minutes. I wondered how an indie film such as this would be able to capture my attention for so lengthy a time. Things started off well, I was impressed by the quality which seemed to be stronger than that of the many shorts of Blacks I have seen. Being based on an Aboriginal legend I had been concerned that fun may have been made out of that belief, but instead it is the opposite way around. Thanks to an all knowing character of an Aboriginal narrator it is instead the non native people who are ridiculed here. These narration segments were the highlight of the film, I loved the way the narrator spoke, and I liked the brief historical lessons he would give (complete with stock photos). My only complaint here was that there were just three or four of them, it felt like it would have been nice to end on one of these as well.

This is a comedy horror and the comedy part wasn't really suited to my tastes. The humour here is base level, sex and scatological jokes that did nothing for me, aside from making me feel a bit queasy at one point. Bazza and Shazza come across as complete cartoon characters, from the ridiculous wig Black is wearing for his character, to the over the top make-up Shazza wears, these two don't feel real at all. Of course that is perfect for a comedy horror. While I didn't find the jokes funny there were parts that did work. I especially thought the ridiculous way the two characters walked and ran around was amusing, like they were both stepping on hot coals, the overall image completed with them waving their arms around constantly. Black's wild eyed stares and facial expressions also worked. While their horror doesn't start until the hour mark there were plenty of kills inserted throughout. The park is a busy place to be and no end of Christmas attired victims meet their bloody end at the hands of the titular Bunyip.

The kills are always done in the same style, a blurring effect is used to create multiple images all washing over each other, while the victims screams are repeatedly played over and over. Aside from a few, most the deaths occur the same way but I thought the blood looked great on the corpses. There are plenty of shots of hands and feet being pulled off, even a few brains being pulled out of skulls. A strong point of the movie was the soundtrack, plenty of Australian sounding didgeridoo sounds which accompanied by shots of trees went well in tandem. The story let the film down a bit, outside of the Bunyip's killings there wasn't much going on, I got a bit lost with what Bazza and Shazza were trying to achieve, leading up to a confusing ending that didn't seem to resolve any of the horror that had been going on. It would have been nice to get some moments of characters trying to battle the Bunyip, and the section that turned the film into a videogame, complete with first person perspective Bunyip kills felt a bit random, I couldn't tell if that was just to fit in more kills.

Badass Bunyip is a film that felt like it would have benefitted by being about half an hour shorter, especially towards the end that seemed to go off the rails in a pacing kind of way. I didn't find a lot of the comedy to my liking but then I never expected to. On the plus side this is a film that feels authentically Australian, the narrator character was decent, the blood looked great, and I enjoyed all the lingo the characters used. It also cannot be said that Black and Kouloukas didn't put in spirited performances that perfectly fitted the zany style of the movie. The best thing about Badass Bunyip is that it is free to watch on YouTube, here; that was a cool decision to make so I do hope a lot of people get to watch this.

Posted by Daniel Simmonds at 11:40