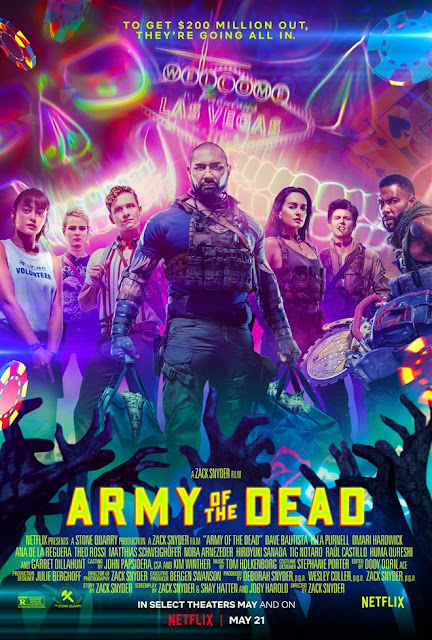 Yes, I know, it's shocking that someone who purports to love zombie films so much has only just gotten around to watching Zack Snyder's (Batman v Superman: Dawn of Justice, Dawn of the Dead) new undead film Army of the Dead. There were a few factors in my weak defence, the primary one being that several people whose opinions I believed I valued said it was a huge disappointment, and secondly that the film is a whopping two and a half hours in length. As to that first point, the film sits at a dour 5.8 out of 10 on IMDB currently. I am however often wont to enjoy films that others may not see as much good. My favourite horror film of all time after all is the much maligned Book of Shadows: Blair Witch 2. Army of the Dead does absolutely nothing to move the zombie genre forward, it does however offer an attractive zombie action flick with a star studded cast that gives no surprises but is competently enjoyable.

The film takes place six years after a zombie outbreak in Las Vegas led to it being sealed off from the outside world. The President of the United States has ordered the destruction of the city via nuclear bomb in order to ensure the zombie plague never gets out. Bly Tanaka (Hiroyuki Sanada - The Wolverine) was an owner of a casino in the city and he concocts a plan to recover the $200 million that still rests in its vault. He recruits mercenary Scott Ward (Dave Bautista - Blade Runner 2049, Guardians of the Galaxy) who puts together a crack team to perform the heist. These include his former teammates Maria Cruz (Ana de la Reguera - The Forever Purge) and Venderohe (Omari Hardwick - Spell) as well as German safe cracker, Dieter (Matthias Schweighöfer), a pilot, Marianne Peters (the digitally added comedian Tig Notaro) and other hired guns. Also coming along is Tanaka's henchman Martin (Garret Dillahunt - No Country for Old Men) and Ward's daughter Kate (Ella Purnell - Kick-Ass 2) who forces herself onto the team in order to find a missing woman from the nearby refuge camp she volunteers at. What at first seems to be a perfectly planned mission starts to go awry with the discovery of a group of intelligent zombies living within the ruins, and a traitor within the group... 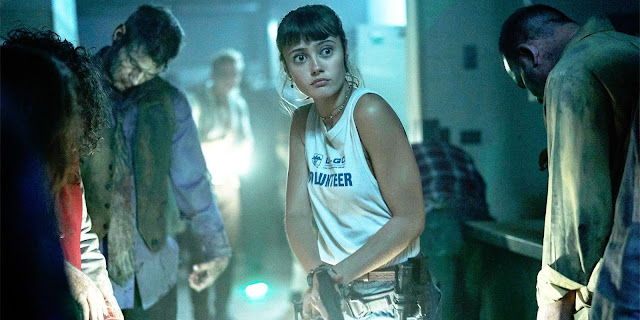 People would often say the same thing to me, that Army of the Dead begins good but then there is a huge lull in the middle. I would disagree. Sure, the prologue is full of zombie mayhem, featuring both the primary zombie antagonist; the hulking Zeus (Richard Cetrone - Underworld) and a montage of slow motion zombie kills that reminded me a lot of the opener to Zombieland. The actual middle of this film is full on action. I think it is more the film's first act that people have a complaint with. To me the flow made logical sense, this first act serves to introduce all the characters in a Suicide Squad kind of fashion. It is the only time we really get to see these characters in a more normal setting. I have to mention I didn't see this film all in one go, I watched it in about three to four sittings, so maybe if I had consumed this all at once the lack of action in this first act would have bothered me more.

When the group enters Las Vegas is when things really get interesting. The plot and mechanics within the film are nothing new in the slightest, but then that was never the aim here. The normal zombies behave in a way very similar to the undead of The Girl With All the Gifts, they are static until disturbed and then spring to life. This leads to one of the best sequences in which the group have to traverse a building full of these rotting statues in the dark. The first real action packed scene occurs here and it was an utter delight to watch. The intelligent zombies of course become a threat later on, I loved the make-up effects particularly on the two leaders of Zeus and his partner. All across the board the special effects were impressive, some of the CG lands just on the correct side of good, but animatronics and digital effects all combine to make an impressive looking film. This has a zombie tiger which in itself should give the film an extra rotted zombie head! 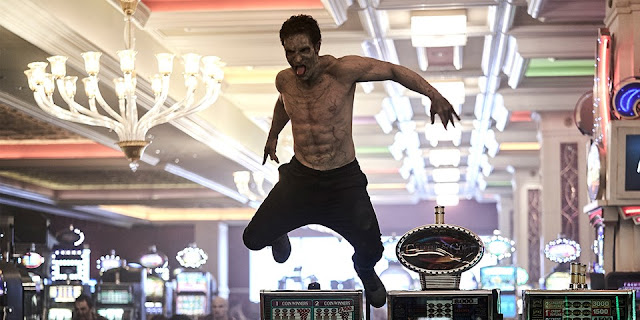 The story is really basic, this is just a heist movie, and not even the first undead heist film, Peninsula was made a few months before this one I believe. This and other factors led to a huge feeling of familiarity. I knew that there was going to be a body count, with the group's number being whittled down in a series of noble sacrifices and shock death scenes. That isn't a spoiler as it was something I assumed before even watching this. Of course that all happens. There are moments, especially in the third act where things got maybe too predictive, it was full of corny uninspired dialogue and slow motion shots of characters facing overwhelming numbers of the undead. That switch in your head that lets you enjoy loud dumb movies? Yeah flip that switch here and don't think too hard about how derivative this all is.

I came out of Army of the Dead fully satisfied. There was enough action and enough zombies done in a good manner that I couldn't help but enjoy this. It doesn't try to impart any sort of meaningful message, what it does do is delight in scenes of zombie slaying madness in a bright and colourful manner, it gives violent deaths to both alive and dead and it might be a bit overlong (including an epilogue that felt a bit tacked on) but I had fun with this. Army of the Dead can be viewed on Netflix.