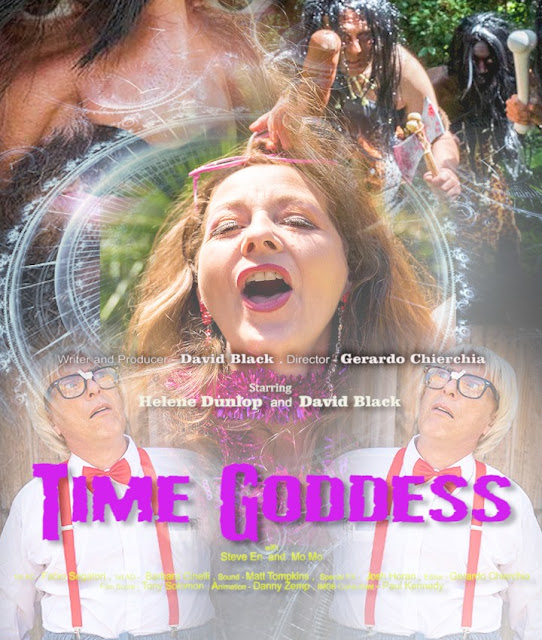 Time Goddess is a short twelve minute comedy horror film that was directed by Gerado Chierchia (Toxic Alien Zombie Babes from Outer Space, Badass Bunyip) and was written by and co-stars prolific David Black (Klink, Klunk, Klonk, Sinister Symbiosis).
Nerdy Darvis (Black) is out on a car ride with his selfie obsessed girlfriend Bambi (Héléne Tardiff - Elevator Story) and is increasingly concerned about her dangerous driving due to her penchant for taking pictures of herself. The worst happens and the car crashes off the road, rather than lead to a violent death it instead somehow leads to a hole being ripped up in the fabric of time and space. Darvis and the car end up safe and sound, however, Bambi finds herself in prehistoric times where her love for being the centre of attention leads to her downfall...
The general outline of the plot, and the cautionary tale aspect of it gave Time Goddess a rough Twilight Zone feel to it. I didn't find a lot of the comedy style here to my liking. Saying that, the car crash, complete with constant freeze frame images of the two co-stars in various states did get a smile out of me, the definite highlight. The special effects on display here are quite terrible, but purposely so which makes them of course pretty great. The car crash itself with its silly effects, as well as the dinosaurs that appear to be children's toys both added to the comedic feel. Plot wise there were all sorts of inconsistencies, all of which can be excused due to the silly nature of the short. Just when you think things have gotten as ridiculous as they could get there is a slight curve ball thrown with a genuine horror element getting added to Time Goddess' finale.
Time Goddess gets away with its sometimes low quality by being a film that sets out to be entertaining and succeeds. From the illustrated intro sequence up to the unexpectedly dark end this remained fun despite the humour not being much to my taste. Time Goddess is free to view on YouTube, so go check it out.
SCORE: