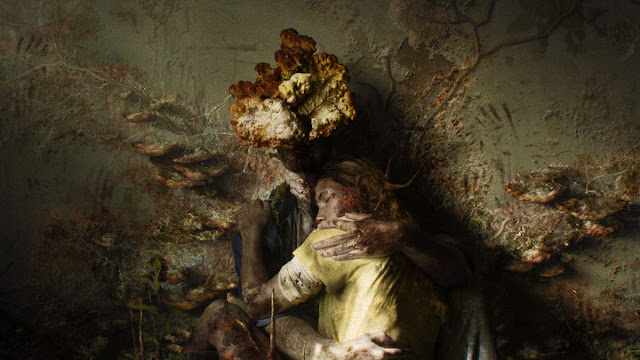 Stay is a short seven minute horror film that takes place within the universe of the horror video game The Last of Us. This was directed, written and produced by Joshua Toonen who is quick to state this is a not for profit fan film that is no way endorsed by Naughty Dog (the developers of the game). Sometimes fan films can conjure up cringe worthy images of low budget theatricals, however this one felt like a perfect fit into the extremely dour world of The Last of Us: Part II.

Inspired by the fan art of two corpses embracing, that was created by Santiago Betancur in 2015, Stay via a montage that flips backwards and forwards in time charts the path of an ordinary young couple trying their best to survive in a world overrun by zombie creatures. Bookended by The Last of Us' Ellie (Paige Bourne) playing a guitar, we follow Sean (Seth K. Hale) and Emily (Ana Beckman) on their quest to visit the Santa Monica pier. The past has them deeply in love and happy, their final days shows them on the run, hunted at every turn by mutated former humans.

For a fan made film this felt like an authentic piece of The Last of Us fiction, you could easily imagine this having taken place in that game world. The deeply bleak world is represented well, and all the sounds and noises you would expect of the zombies and clickers is implemented. The scenes with the undead are the highlight here giving me some 28 Weeks Later vibes to sections of this. Being a montage there isn't so much a focus on dialogue, maybe good seeing as the sound quality at times isn't Stay's strongest element. There were occasions I inferred what was being said rather than able to actually make out the lines. The clickers fungus growths occasionally didn't hold up to close scrutiny, but to be honest this is all nit-picking and both the elements I mentioned are a much higher quality than you would expect. The story about average people rather than super powered heroes was a good call and in terms of emotion this is designed to elicit feelings of sadness, helped of course by the downbeat story, as well as the use of a morose acoustic version of Creedance Clearwater Revival's Have You Ever Seen the Rain.

For a seven minute short this tells a competent story though I am a sucker for time jumps, especially when they have such a nice juxtaposition as they do here. If you are a fan of The Last of Us, or zombies in general then check out the emotional Stay, it can currently be found on YouTube.