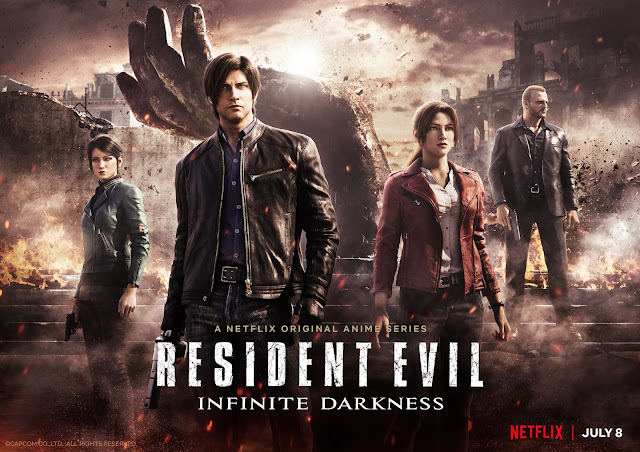 Growing up from my teens into adulthood I was hugely into Resident Evil. This wasn't just the video games I loved, I even branched out into the novels, comics, live action films and into trying to write fan fiction. Even I could never get into the animated films though, as much as I tried I just couldn't get on with them. They expected you to have a demented level of knowledge about the wider Resident Evil universe, they wanted you to be fully on board with the po-faced seriousness they tried to convey, and they hoped against hope you would turn a blind eye to the sometimes janky CG effects as well as the cringe inducing over the top moments.
Netflix commissioned a couple of shows based on the franchise, the first to come out was the four episode anime mini-series, Resident Evil: Infinite Darkness. Would this be as awkward and humiliating to watch as the CG films or have they finally redeemed that faze?

The show takes place in 2006, within the Resident Evil video game timeline this is after the events of Resident Evil 4 and before the events of the fifth game. Much like the animated films this is considered canonical. After the White House computer systems are hacked and data relating to China is stolen, specialists are brought in to help investigate, with it feared that a war could be brewing between the two super powers. The specialists include Leon S. Kennedy (in the English dub voiced by Nick Apostolides), this character previously survived a zombie outbreak in Raccoon City as well as succeeded in a dangerous mission to rescue the American President's daughter. He gets tasked to go on a secret mission to a research facility in China, along with Shen May (Jona Xiao) and Jason (Ray Chase). Meanwhile, Claire Redfield (Stephanie Panisello), an aid worker who also survived Raccoon City discovers evidence of a cover-up of a zombie outbreak back in 2000 and so starts to investigate. 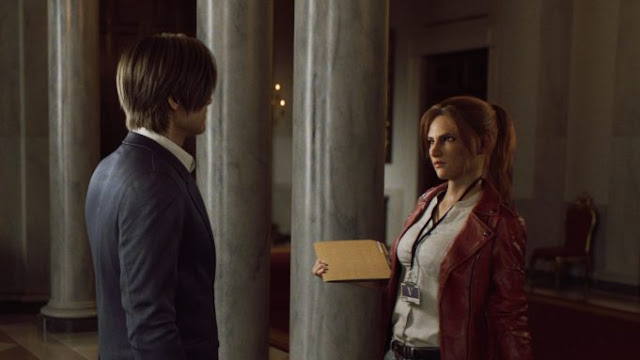 Each episode is roughly twenty five minutes long and with just four episodes that doesn't make for a meaty season. The story is typical animated Resident Evil for better or worse, but one benefit of being a series means the histrionics of the feature films are reduced. I recall watching Resident Evil: Damnation last year and getting so bored at the convoluted never ending fights against boss type monsters. With Infinite Darkness the ratio between action and dialogue is a little more measured. The story isn't amazing, neither in the actual specifics of what happens or with the writing, but at least there is a great title sequence opening each episode, and the soundtrack feels suitably Resident Evil and so gets a thumbs up from me.

Of the four episodes then. The first one centres around a zombie outbreak at the White House, it was cool seeing Leon and Claire again, though I had imagined they would be sharing screen time. Instead, it turns out Claire exists mainly in a small subplot, she gets one tiny scene with Leon in the the first episode and then it is the final one where she finally gets to be a part of the main story.
The second episode takes place almost entirely onboard a submarine, it kept up the moments of horror with a swarm of zombie rats that made for some fun scenes. It is here where the cracks are already beginning to show in the story with characters doing bizarre things that never do get satisfactorily explained, but I was still liking it.
The third episode is more exposition than anything, zombies of any type decline to make an appearance save for the flashback sequences which are used throughout a lot of the episodes, all pointing back to an event in 2000 that involved a lot of the new cast.
Finally, the fourth episode is almost a tick box of expectations, you get a huge lab, a self destruct sequence, a big bad monster to battle, so nearly identical to anything Resident Evil. As exciting as it tries to be here it is a bit hard to muster too much enthusiasm when this is always how it ends. 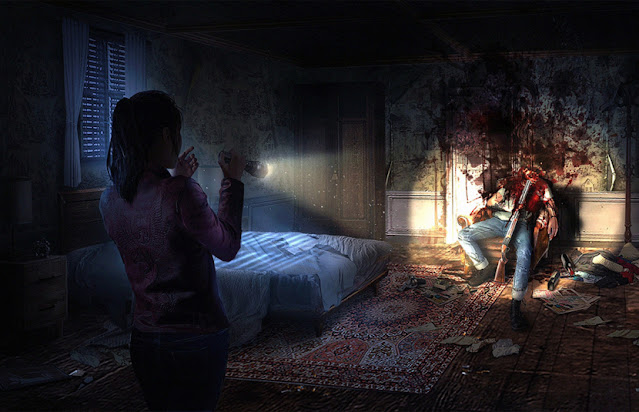 The most off putting thing for me was the animation sadly. It seemed to vary wildly in quality, I don't know if I was being too critical but often it would feel like I was watching a video game cutscene, animation of background characters often seemed really basic, and there were some parts that looked plain unfinished. There were a few scenes set outdoors in America for instance, I think the attempt was to make the scenery look misty, instead it came across like the detail had forgotten to be added. The characters are motion captured so you would think they would look natural, mostly they do, but Shen May in particular looked really weird on screen, she didn't quite fit the locations she was meant to be existing in. Of course, the animation here is a lot better than the films that have come before, but the goal post are always moving and so the animation still doesn't quite feel like its there.

I get why there were only four episodes of this, the Netflix Castlevania show did a similar thing for its first season. To be fair with such a generic storyline going on here it was probably thankful the scope wasn't increased. I did enjoy this, the directing was interesting at times, and the frequent flashbacks were nice. Stripped back though this is as bland a story as you could get, swap out the characters and this would fit any of the animated films easily. Hopefully if a second season gets commissioned they can really think about how to make an interesting entry, Resident Evil: Infinite Darkness was fun enough to pass an hour or so but I can't say it is essential viewing, though at least its better than the animated films.