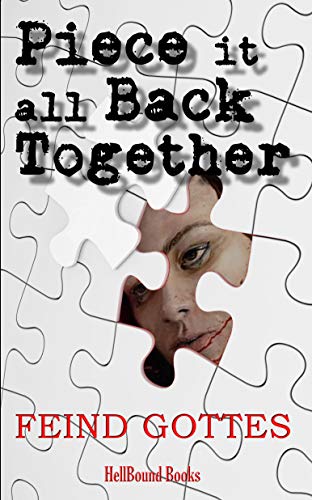 I always use my three day weekend off my day job to write the blog posts for the next week but this past weekend had been different. Unexpected plans, and some darn humidity that has been affecting my sleep has meant I've done nothing blog related this weekend. Thankfully, last week I finished reading Feind Gottes horror/crime novel Piece it all Back Together and so that can make up one of the sole blog posts for this week.

Within the novel there are several different subplots going on but they all feed back into the main story. Jamie Windstein is an alcoholic small time private investigator who gets hired one day by a dying millionaire, Thomas Combs. He wants her to locate the whereabouts of a long lost friend, a man named Jimmy. When they were young they were both at an orphanage that was run by some very abusive people, and now with Thomas dying he wants to reunite with Jimmy to let him know just how much he saved him back during those dark days. Things take a more strange turn when Jamie discovers two severed heads on her kitchen table with a cryptic message carved into them. Not one for coincidences she starts to suspect it is related to her new client. Meanwhile, the policeman husband of Jaime's best friend and receptionist gets offered the opportunity of a lifetime when he gets brought on board by a gruff detective to join him in the search for a local serial killer who is known for removing the heads from their victims...

When reading books for review I make it a point to read at least one chapter a day. As I got more and more into Piece it all Back Together I found myself reading more and more each day. There are elements of this novel that felt very familiar, there were parts that felt a tad unbelievable, but there were parts of this novel that were simply fantastic moments of fiction. Swap around a few characters and you would essentially have a Dexter novel. I've never actually read any of them but the general storyline to me felt very similar to the TV show's first season plot line, so much so that I correctly guessed a lot of the twists early on due to the sheer similarity of some plot points. This couldn't help but loose some marks just for this feeling of having seen it all before, regardless of how entertaining this was all to read. My other slight nit-pick was that the mysterious serial killer haunting the town is said to be so clever as to never leave a single speck of evidence. It helps that the headless corpses are never found at the scene of the crime, but the way the novel operates (by having different chapters follow different characters) shows things occasionally from the killers perspective. The killer is shown to have a very short fuse and prone to outbursts of uncontrolled violence that can't be conductive to leaving spotless crime scenes. Going back to Dexter though you have to assume the authorities are incompetent for the killer to be getting away with what they are doing, which almost rings true when such a tiny taskforce are working on the case (for fear of causing a panic should the knowledge of a killer operating in the area get out).

Despite my complaints this is a novel that got more and more exciting and horrific as it went on. The pure highlight of the novel was when Jamie arrives at the dilapidated home of a former orphanage worker. The man has become a hoarder of rubbish and her slow ascent through his home is described in disgusting detail. The descriptions were so vivid that I could see all this in my mind like I was watching a film. I don't usually like disgusting moments, but this one chapter was a masterclass in it, culminating in something truly awful. The book can be pretty extreme at times with what happens, there are a lot of dark moments, the most terrible part taking the form of one of the many flashbacks to the 1980's involving a baseball bat. As derivative as some of the ideas may be I did love reading this, I loved how these flashback chapters revealed lots of core information that then feeds back into the present day sections, and I loved that occasionally we get chapters from the antagonist's perspective that manages to not really reveal much while still being compelling. When the first twist occurs early on into the novel I was delighted, it turned into something different to my expectations.

I've spoken a lot about the similarities I felt reading this novel, but I have to stress again how enjoyable this was to read. There are some great ideas here, a good sense of pacing and enough going on with the characters that I would happily read a follow up. Piece it all Back Together is out now via Hellbound Books.

Hell yeah. I myself am almost through the book and my dad has always had the most descriptive graphic horror. Don't have to look far for where i got my creative talents from.