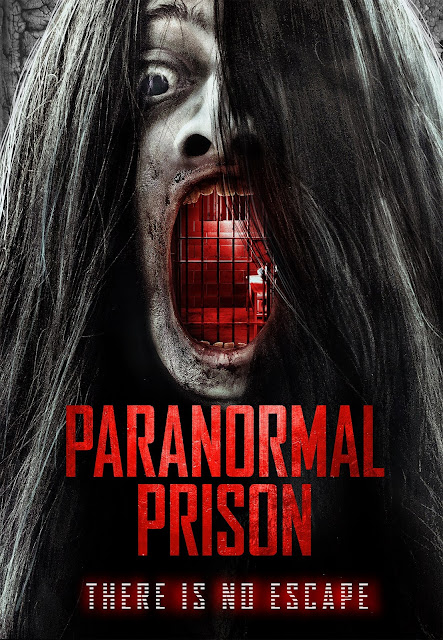 The title for the Brian Jagger directed found footage horror Paranormal Prison brought to mind the lovely found footage horror trilogy Paranormal Farm and so going into this I was open to having a fun time. It soon become clear my optimistic wishes this would actually be a sequel to that series would not come to pass, but this had kind of a similar vibe, set in a world of characters that don't really take themselves all that seriously.

An online paranormal investigation show titled The Sceptic and The Scientist is facing its end due to low viewership. The show was funded by narcissistic Matthew (Todd Haberkorn - voicework on Resident Evil 3 remake) using his trust fund and unless he can come up with a viral hit there will be no money left to continue. His team, that includes himself, amateur scientist Sara (Paris Warner - Zombies vs Snowboarders), sound technician Ashley (Corynn Treadwell) and cameraman Jacob (Brian Telestai - Malice) and they have been granted permission to spend the night at a former prison in Idaho that has a grisly past. With the prison set to be demolished and turned into condos the group hope to be able to be the ones able to finally gain real evidence of supernatural happenings there. Acting as a guide for them is Park Ranger Shtog (Easton Lay) who is able to give history to the various locations at the prison they visit. 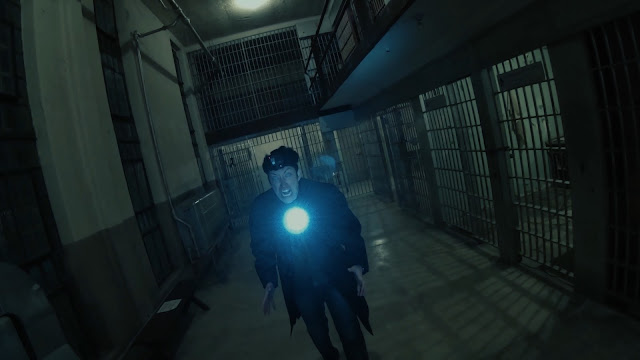 The characters here were all likeable, even Matthew, a character designed to be annoying is endearing due to his recognition of his bad traits, and his crews acceptance of these traits. While they don't bow down to his commands they do realise this is all only possible because of him and so there is a grudging respect there. The first act serves as a history tour of the prison, I found the tales Shtog told to be really good storytelling, adding atmosphere to the already atmospheric location of a real former prison. There is a comedic element at play here with some silly lines that just work. An early example has Shtog warning the group they should get their filming done before dark, the group question him as to what happens after dark, to which he replies something along the lines of "...it gets dark, it makes it harder to film". So silly, but that sort of dialogue appealed to me. Sara, Ashley and Jacob all get moments where they give emotional backstories to why they are working on the show. One of these was bad enough (sad music playing and a character full of tears) but to have this same idea used a few times made them feel more corny than they would otherwise have been.

Paranormal Prison is edited together to resemble a show, yet it is also obvious that this isn't actually an edited together show if that makes any kind of sense. There is a fast paced MTV style sense of pacing here with constant scene changes and constant camera changes as if they were worried the viewer would get bored. Lost footage, camera blips and hand cameras are all blended together to give a variety of styles that often fuse together well.  This fast editing works due to the characters within the film as it is easy to imagine this is the style they would have gone for. The editing in any other sense wasn't good, it became easy to get confused with all that was going on, but I could give it leeway and except it was the style the online show would have been presented with. Adding to the DIY feel are the flashback sequences that are used to hammer home important clues from earlier in the investigation, again these felt they fitted fine with the films tone. Where this all began to fall apart unfortunately was the ending. This last part became the most important story wise and yet it was rushed through as if there was no money left to finish filming. For the film to remain so engaging throughout it felt like a bit of a botched landing to so swiftly and unsatisfyingly wrap up the film without any real conclusion. 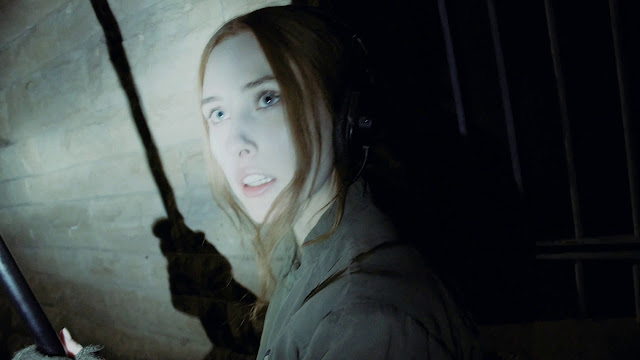 With indie found footage films especially there is always a worry that it will be light on action. With the film taking place at the site of an actual former prison I was sure there would be constraints on filming and what could happen on screen. Due to this I was right to assume there would be no blood or guts, or much danger outside of people vanishing and people running around. It works to its constraints though by having the crew set up cameras in four specific locations, death row, the woman's wing, 'Siberia' which is the solitary confinement room and the laundry room. The film has the cast going back and forth between these places in a manner that became slightly formulaic. Generally they would all be in their communications tent outside the prison building and when something weird was spotted on one of the cameras a couple of characters would then go investigate. This process was repeated a lot and made up pretty much all the second act of the film. For the most part the assumed horror comes from ghostly images that pop up on the camera feeds, but these seemed so basic that it was hard to take them seriously. I was impressed that actual horror elements do appear in the third act, I appreciated this as was fully expecting the film to continue its very low thrills action.

Paranormal Prison may finish in a rushed way, but underneath the weird editing and a pondering middle act this was an enjoyable found footage that at just 70 minutes long doesn't outstay its welcome. It may not be the most exciting movie but it has a decent cast and a great location. Paranormal Prison is due to be released by High Fliers Films on 22nd November later this year.

Posted by Daniel Simmonds at 23:27