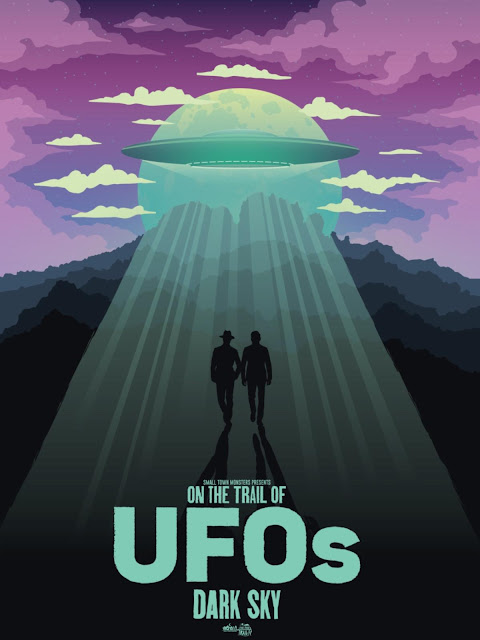 Aliens are quite possibly the first kind of monster that I ever got into. I remember as a child my dad had quite the collection of books on the subjects of UFOs and I would spend hours flicking through them, mainly to look at the pictures admittedly. On the Trails of UFOs: Dark Sky is the latest documentary from Seth Breedlove (The Mark of the Bell Witch, Terror in the Skies). This is a follow up to the 2020 episodic series, On the Trail of UFOs. For this documentary paranormal researcher Shannon LeGro takes centre stage as she heads around mainly West Virginia in order to record a series of first hand accounts from witnesses of UFO phenomena.
This is a beautiful part of America so this has plenty of lovely looking scenery which is an immediate plus. It also happens to be quite an interesting documentary, the reason I brought up my childhood memories of looking through my father's books is that this doc touches on subjects that I hadn't really read too much about since then. Any fear that a multitude of witness testimonies would lead to boredom were also ill founded. I don't know if it is due to the lazy Sunday I am having but the mostly low thrills accounts of strange lights and objects being viewed in the dark skies was interesting see. None of the people interviewed seemed like they were crack pots and the questions being asked by LeGro were not sensationalist. Sure the documentary as a whole goes partly in this direction with recreations both in the form of drawings and CG recreations but it even goes as far to say just because these are UFOs people are seeing it doesn't necessarily indicate the presence of aliens. It may err towards the paranormal but there is a more rounded look than expected such as one part that focusses on the possibility of there being secret government test bases in the area of reported sightings.
As well as interviewing people there are also a couple of sight visits, one actually has the surprise of LeGro and her crew actually spotting their very own legitimate UFO sighting that they also manage to capture on camera which felt like something quite cool. Another visit to a cavern system seemed a bit pointless, I never really understood why they went there to conduct an interview even if it made for a change of location. There was a good pacing here I felt. Throughout the interviewer questions the witnesses as to whether there are any nearby mines in the area, the reasons behind this are left mysterious until the final part of this where it is suggested the UFOs could be originating from inside the Earth, not necessarily about the hollow Earth theory (extremely briefly touched upon) but more that there could be hidden bases in the area. The most interesting topic for me was the men in black part. This has been muddied in recent years thanks to the popular sci-fi films but these real accounts led to some of the more creepy moments of Dark Sky.
There is so much supernatural and paranormal incidents in America that I don't think Seth Breedlove will ever run out of topics to explore. A UFO documentary that only involves sightings in one state of America is testament to the amount on the subjects that exists in modern day USA. There may not be too much here that would surprise people with at least a rudimentary knowledge of UFOs but it is all presented in a way that is interesting, informative and most importantly entertaining to watch. On the Trail of UFOs: Dark Sky comes to VOD on August 3rd.
SCORE: