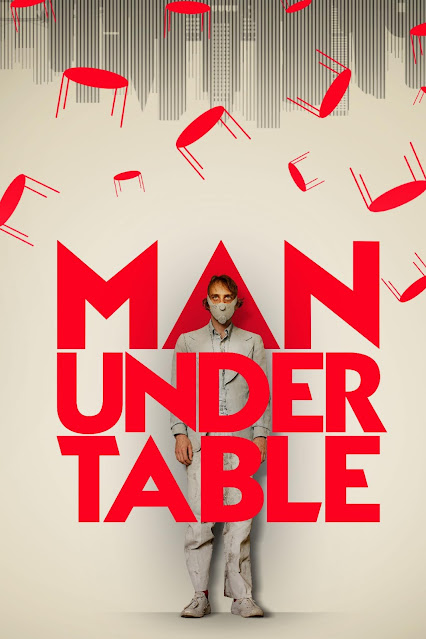 Where to start with Man Under Table? It is definitely the strangest movie I have seen this year, something that seems to make an art scene out of being unable and unwilling to decide what it wants to be. This indie film that was written, directed and stars Noel David Taylor is about writing and the process of doing so but it is also about nothing and it uses a variety of meta techniques along the way to hammer this home.

Taylor stars as an unhappy young man in a dystopian future L.A in which a toxic green smog has led to people living their lives indoors. To anyone who asks he tells them he is a writer and that he wants to make a movie, however he seems to have zero passion for this. Getting caught up in other people's projects he eventually teams up with an older man named Gerald (John Edmund Parcher - My Name Is Earl) to help Gerald write the screenplay for his own film. 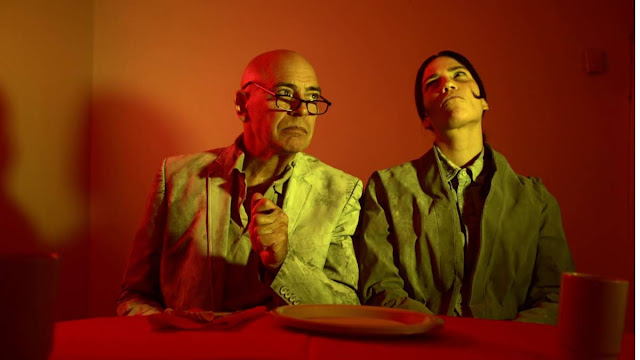 In terms of this being about writing I don't have anything to add, I don't know much about the industry. There is the recurring gag of creating a film that deals with both identity politics and fracking, though no one really seems to know what this would entail. It feels like a soulless endeavour leaving your desires in order to make something that would get you rich and famous. What I enjoyed about this was how strange it was and the complete lack of enthusiasm characters, especially the main lead (a nameless man referred to as Guy by others). I liked the film's refusal to create a plot. Scenes follow scenes with not much linking them, the possibility of a story is constantly stonewalled, such as characters refusing to acknowledge pertinent questions they have been asked, or events that should be dramatic but very downplayed. On some level it appears to be about how trying to appeal to everyone you end up with a product that appeals to no one. This can be seen with the ever present 'Nothin' but Lyle', seemingly the only TV program in this future world, starring an influencer (Robert Manion) who talks and talks but with nothing to say. A lot of the cast here fill up their scenes with dialogue that moves around in circles like a holding pattern.
My favourite parts come from the scenes that Guy and Gerald share together, within the film they are discussing the film they are working on but it in a meta way it is obviously Man Under Table itself that they are discussing, down to Gerald describing the main characters as themselves. It leads to some of the best lines of the film that poke fun at the actual movie as a whole such as Guy's line "This isn't a movie, it's just a bunch of random scenes about some guy." and "Everyone is going to hate this because it's not anything." In a way Taylor is playing an exaggerated version of himself just to add another meta layer to the film.

The look of the film is cheap and low-fi but comes across as something more expensive due to how obvious it all is. Background characters are literally represented by cardboard cut outs and often characters speaking don't even appear on the screen. At times the sets appear to be small models that the actors have been super imposed onto, such as the scene in what I assume was meant to be an aeroplane, then there is the taxi ride which involves two characters sitting in a metal frame work that vaguely resembles a car. There is no effort for realism in these scenes so rather than making the film look cheap their being pointed to creates an art like vibe. Effects are kept to a bare minimum but I did like the film's score, and I thought the costume design in particular was a highlight with everyone walking around in these dirty clothes. It was also an interesting choice to have in film world adverts appearing at the the bottom, like the viewer themselves was within the film. 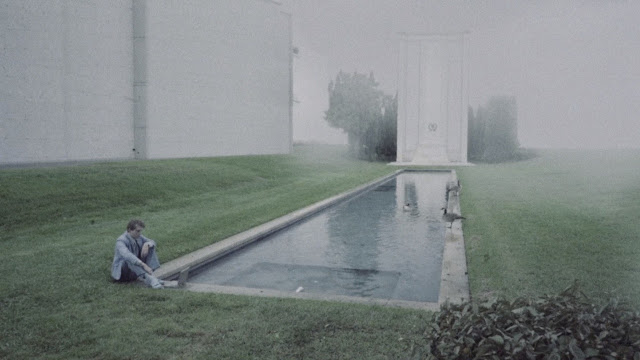 Man Under Table is a surreal and pointless feeling film and so it is to its credit that it is only in the last five to ten minutes that I started to get slightly tired of the meandering format. That it lasts over eighty minutes without having a plot and remained involving was pretty amazing. If you want to see something very different then check it out. Man Under Table heads to the ARROW subscription service on August 2nd, it will include a bunch of extras including a making of featurette, deleted scenes, a commentary from Taylor and more.