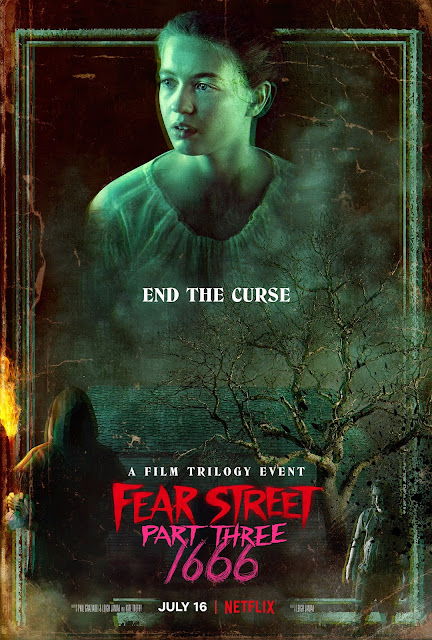 The Leigh Janiak directed horror film trilogy that started less than a month ago with Fear Street Part One: 1994 is complete. I can't think of another example of sequels to films coming out so hard and fast and as an experiment I think it has worked. Fear Street Part Two: 1978 fittingly took place within the 1970s and so with a film titled Fear Street Part Three: 1666 I expected this to follow a similar pattern using its time period. This is the least self contained film of the trilogy, something that becomes apparent the further you get into it. It serves as a fitting end to a fun trilogy but at the cost of some pacing. Again, I will try and keep spoilers to a minimum for the previous films but some are sure to slip in. Take it as a given that any actors I mention here have also appeared in the previous two films.

Following on from the ending of 1978 and Deena (Kiana Madeira) finds herself plunging through time all the way back to 1666 and the origin of the witches curse that has plagued Shadyside for centuries. It is here where she briefly realises she has become the legendary witch, Sarah Fier before that persona takes over, with Sarah experiencing everything that happened as a silent observer unable to change events. In 1666 Sarah's secret dalliances with best friend Hannah (Olivia Scott Welch) gets discovered, swiftly following on from this the village of Union, with which they live falls to an apparent curse. The food becomes rotten, the animals die, and the town pastor (Michael Chandler) turns mad and kills all the village's children. Needing someone to blame, the religious village folk see Sarah and Hannah's 'unnatural' pairing as the root cause, it isn't long before both are accused of being witches, Hannah is captured, while Sarah goes on the run, vowing to become the witch her neighbours have already accused her of being in order to get her revenge... 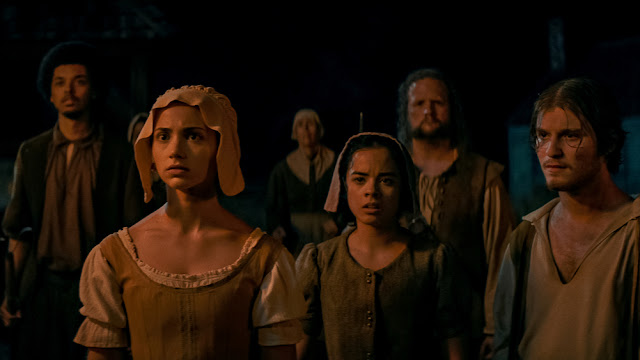 At just over an hour into 1666 there is a huge shift. Without going into too much detail this is almost like two films in one, the second half even has its own title card. This perhaps explains why parts of the story felt so rushed. The film starts and everything seems idyllic. Characters last seen getting killed in 1994 are alive and well, and all is happiness and joy. Within less than a quarter of an hour things have substantially changed for the worse. Watching this it felt a bit abrasive how fast things were moving, it didn't feel like there had been enough time given to establish characters. Knowing now this is a film of two halves explains away why this choice was made, but the rushed beginning and rushed end of this part of the story was still noticeable. The second half is good in its own right and puts a lid on everything but I did feel it came to the detriment of what was a different feeling period piece.

I liked how actors from the previous films all get to appear here playing different characters, such as McCabe Slye previously playing Tommy (the axe wielding maniac of 1978) now playing the memorable greasy haired town drunk, Mad Thomas. With the character Deena inhabiting the body of Sarah it even makes sense why all these returning actors are back in the past. At times Sarah switches to what she actually looked like rather than Deena in her role, so it made sense that in a story context the villagers would be represented by people from Deena's memory rather than strangers she hadn't seen before. Even though they were playing different characters it was nice to see people returning, especially when some of them suffered brutal deaths in the previous films. Benjamin Flores Jr. was a memorable character as Josh in 1994, but playing Sarah's sibling Henry he seemed barely to have a role. What little he did have was him standing around not doing anything. While it was nice to see him in the past he seemed a bit pointless there. Then there are of course the accents, everyone is going for a kind of Irish accent which works to varying degrees, none of which were ever stunning.

As much as 1994 and 1978 represented their eras so too does 1666 feel kind of appropriate to its, though in a cleaned up style. The film mainly centres around the village area, full of wandering animals, torches and braziers and timely clothing. The music changed from using licenced music to more of an orchestral score, I wasn't sure at first but the score is quite good. Much like 1994 was partly a homage to slashers like Scream, and 1978 to slashers like Friday the 13th, 1666 brought a more mainstream feel to such horrors as The VVitch: A New England Folktale. It shouldn't have been surprising, but I still found it so upon discovering everything presented in the other two films isn't quite as it seemed, and that maybe the witch wasn't as evil as viewers had been led to believe. There are a few call-backs to those other films, with 1978 its specifically the secret witch tunnels, and with 1994 as was expected the film eventually heads back there for the epilogue. Having everything come full circle was satisfying, a sign of a good sequel to have so much intertwined between these films while still standing on their own merit. The special effects are as good as always though this one does have a smaller body count, or at least a smaller on-screen body count. It still leaves room for a painful looking severed hand moment.

Fear Street was a nice little trilogy whose plot benefitted from being created all at the same time. As much as I liked Fear Street Part Three: 1666, the concession it had to make to wrap up the trilogy came at the expense of a more layered and in depth story. I did enjoy the second half but I also felt like something was lost by presenting the story in such a way. Like the other two films this is currently streaming on Netflix.