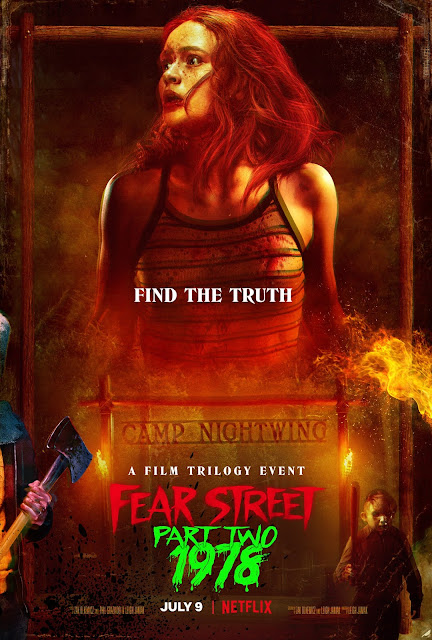 It turns out I'm more current than I thought I was. Netflix's Fear Street is a trilogy of horror films based on the R.L Stine teen horror books of the 90s, the big hook being that this trilogy is all being released within a short three week time frame. Having enjoyed Fear Street Part One: 1994 I jumped on board Fear Street Part Two: 1978 not even realising it only came out on 9th July, a week ago. I will try and keep spoilers from the first movie to a minimum.

Picking up directly after the events of the first film, the survivors have arrived at the house of a woman who back in 1978 survived both a massacre by an axe wielding maniac, and an encounter with the fabled witch of Shadyside. The survivors want to know her story to see if it will help them finally find a way to end the curse that has plagued their town for centuries. The rest of the film takes place as the form of a flashback.
It is summer 1978 and the teens of Shadyside and nearby Sunnyvale are at summer camp. One of these teens is wild child Ziggy (Sadie Sink - Stranger Things) whose antics nearly get her thrown out of camp, much to the annoyance of her prim and proper older sister Cindy (Emily Rudd). Both sisters have strange dealings with the camp nurse, who in a fit tries to kill Cindy's sweet boyfriend Tommy (McCabe Slye - Fear Street Part 1: 1994) as she fears he is going to become a killer. In her belongings an old journal is discovered, with it becoming clear the nurse believed the witches curse (that is local legend) is in fact real. Against her better wishes Cindy and Tommy end up following her former best friend, Alice (Ryan Simpkins) and her boyfriend to a location on a map in the journal, which turns out to be quite supernatural. Here is where Tommy becomes possessed, turning into the previously mentioned axe wielding maniac. Trapped underground, Cindy and Alice must find a way to return back to the camp site and warn the others, meanwhile Ziggy and the other campers must try and survive against the murderous new killer...

I wondered how a sequel that is set in the past would actually work, of course having the majority of the film framed as a flashback was the way to go. There is perhaps five or so minutes at the start and end that bookend this flashback. It is that part alone that really tells you this is not intended as a stand alone movie. This is something that I enjoyed more simply for having known roughly what happens via little bits of lore dropped throughout 1994. It leads to a strange feeling in that you know from the start that Ziggy will survive, that her sister will die, and that the killer is stopped. None of this is spoilers for the reason it is implicitly stated at the beginning. Again directed by Leigh Janiak, this follows a similar format by appropriating a time period, having characters dressed up in era appropriate clothing and then using a whole bunch of the most iconic music from that time period. To be honest I didn't realise how much cool music there is, like 1994 it is what you would expect, (Don't Fear) The Reaper by the Blue Oyster Cult, David Bowie's The Man Who Sold the World and other go-to classics. Unlike the 90s which felt like a pastiche of 90s culture this felt more authentic. Of course I am saying that as someone who wasn't even alive in the 70s and so I'm sure it suffers just as much as 1994 did with an off feeling. There was also the slightly odd re-use of some of these songs multiple times, I don't know if that was due to not being able to get licences to create a more varied soundtrack.

1978 is a more serious film to 1994, there are a few comedy characters but these are relegated to very minor side parts. This makes the overall tone a whole lot darker. The film is on the whole a lot more grounded as well. The first film had a trio of supernatural killers, here though, it is mostly just a still alive Tommy who is doing the killings. Having a campsite as a setting you would expect a Friday 13th vibe, but for me it felt more Sleepaway Camp with the young campers. There seemed to be a higher body count, mainly by axe. The kills mostly all looked decent, some nice decapitations here and there. The maybe wise decision to have any deaths involving the young teens insinuated rather than shown on camera was taken. Sink was great in the lead role of Ziggy, I liked the conflict she had with her sister Cindy, most the main cast in fact have their own demons to deal with, Ziggy, Cindy and Alice all have bad childhoods, while Nick Goode (Ted Sutherland) had the pressure of the expectations his dad had placed on him. 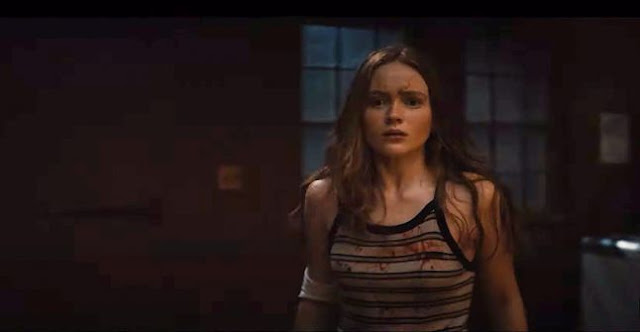 The massacre at the campsite despite being one of the major storylines here doesn't really have much to add to the lore of the overarching story. This lore all comes from the subplot of Cindy and Alice discovering about the witches curse. It leads to some nice moments for people who have seen the previous film as we have more knowledge than the characters. Despite events being pre-known this was still engaging to watch, personally I liked the more darker tone. Even though it is darker it isn't bleak in the way the horror films from the actual decades around the 70s could be. It helps this is all filmed so crisp and clear, its an attractive film to watch, with some nice cinematography a times.

I enjoyed Fear Street Part Two: 1978 more as a sequel than a standalone film. It built on what had come before while leaving enough open that I am interested to see how this unique trilogy finishes up. Don't come here thinking you will find a scary film, it isn't, the killer may be murderous but isn't fearful, there might be plenty of blood and gore but this feels very much a enjoyable, but not horrific film.