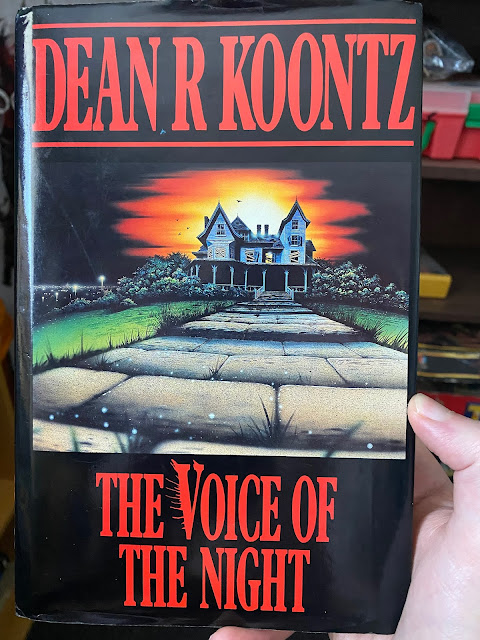 There always seems to be a 50/50 chance that when I read a Dean Koontz horror novel I may actually not really like it all that much. Koontz has been writing since the late 1960's and is still admirably writing up to present day. The Voice of the Night was released in 1980 under his pseudonym Brian Coffey and tells the tale of a psychopath. Reading a book from that time period it is hard to understand exactly what was known and not known at the time. Nowadays everyone knows what a psychopath is due to the sheer amount in media, it is hard to know if this would have been more surprising at the time even with the existence of such books and films such as Psycho.
Nerdy introvert Colin Jacobs has moved with his mother, Wheezy, to Santa Leona, California. Colin has spent his life without any friends due to him being shy and awkward so is delighted when he meets a similarly aged boy, Roy. Despite being very popular and personality wise the opposite of Colin, Roy has chosen Colin as his new best friend, something the boy is extremely grateful for. Often times Roy would indicate that he had a dark secret within him, he eventually reveals he fantasises about killing people and that he has done so before. Colin is utterly convinced his new friend is just teasing him and doesn't mean what he says, but one night it becomes clear that what he says is true. With no one in the town ready to believe there could be anything evil about such a wonderful boy Colin finds himself alone, having to find a way to not only stop Roy from taking his revenge at the rejection his secret caused, but also to figure out a way that the world can see Roy for the monster he really is.
The Voice of the Night is split into three parts, it is unfortunate the part 1 was so dull and slow to get going and that at 232 pages is by far the longest section of the novel. In comparison part 2 is around 40 pages in length, with the final part made up of around 60 pages. Part 1 felt to me like it was going around in circles, with Colin taking far longer to clock onto the fact his best friend is a psychopath than the reader. I mean sure, the reader had more ability to see this seeing as they were reading a horror novel, but even so the story follows a repeating circle. Roy will indicate his viewpoint of the world is twisted, Colin will think he is joking and then everything gets reset over and over again. Part 1 closes out in thrilling style however and while the next parts only made up up a third of the book the excitement and thrills never lessoned. So much so that I have to admit I skipped ahead to the end to make sure the characters I liked were all fine!
Much of the book is conversations between the two main leads, protagonist and secret antagonist. Koontz actually does a good job of having these characters being able to identify with each other which even stretches to their interests. Colin has a love of horror films, Roy has a love for real horror. Colin and Roy both feel like outsiders, even if on the surface the later seems to fit into the normal world fine. The best comparison were between their parents. Roy's parents seem supremely indifferent to him not caring where he is or what he does. Initially it seems Wheezy is a more loving character, yet her always being at work leads to obvious neglect, more damning as it is indicated her work excuse might actually be her spending time with a secret boyfriend. When she gets caught up in Roy's lies it is clear she really doesn't understand her son. All these similarities turn Colin and Roy into perfect adversaries as they use their knowledge of each other against each other.
The horror here is surprisingly slight. There is talk of murder and rape but not much happens in the present timeline of the story. At times this felt almost like a teen horror, like a Point Horror book from the 1990s (I used to love those!) but I guess there is a lot of swearing and more brutal descriptions of scenes than those ones used to feature.
I am glad that The Voice of the Night finally picked up, I really did love the last third of the novel, so much so that I found it hard to put down. The bulky first part was just a bit too slow for me, it turned reading the book into a bit of a slog. Get past that though and you will be in for a thrilling time, and all from the perspective of a young teen unable to get outside help.
SCORE: