The Rotting Zombie's Round-up of Horror News for June 2021 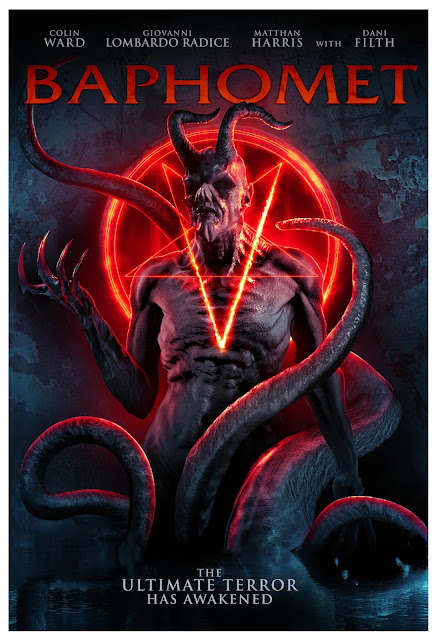 I've been teasing it for ages now but I'm really going to have to start putting out more than one news post a month as my inbox is just getting larger and larger. A few weeks back I had a hosting issue with the site address my blog pointed to, as such there are a whole bunch of dead links, most notably in my site index. I am slowly working my way through the back end of my blog to fix this, but with over 2,500 posts that is going to take a heck of a long time to fix! Onto the news...

Baphomet came to Blu-ray, DVD, and Digital Formats on June 9th. This horror from Cleopatra Entertainment stars Dani Filth (lead singer of Cradle of Filth, one of my all time favourite bands). The film is directed and written by Matthan Harris and also stars Colin Ward, Giovanni Lombardo Radice (The Omen, City of the Living Dead) and Nick Principe. The film is about an American family whose ranch is visited by a Satanic cult leader who wants to buy it. When the family refuse things go south and they find themselves in a deadly battle between good and evil. Filth said of the film "I really liked the idea of it. The script was good. It seemed genuinely interesting, esoteric. The premise is great, and I quite liked the idea of the character I was playing..." The soundtrack for Baphomet also released in May.

Vork and the Beast is out now on DVD and Digital from Bayview Entertainment. This sounds like it is an anthology based around the idea of a realm haunted by a bloodthirsty beast. A lord of a castle is concerned with the survival of his people, two brothers share a dark secret that finally gets revealed, and a mysterious warrior is on a quest to defeat the beast. The film can be brought here.
Also out now from Bayview is French film Blondie Maxwell Never Loses which describes itself as a 'future anticipation thriller' that 'explores the consequences of unreasonable use of technology and artificial intelligence while addressing concepts of the ultra uncountable of society and the privatisation of justice'.
The prolific creator Andrea Ricca has released trailers for his upcoming films Sharkarantuala VS Snakeorpion, Double Shark, and Sharkenscorpion. The trailers for these greatly titled films can be seen on his website.
Joe Leone's horror suspense thriller Death Sentences came out on 4th May from Midnight Releasing. In this one a young author heads to a remote cabin her family owns. There she encounters the ghost of her cousin who promises in return for tracking down his killer the ghost will finish her novel she is struggling with.
Staying with sharks is Apex Predators which released on 11th May from Wild Eye Releasing. This stars Brinke Stevens (The Slumberparty Massacre), Mel Novak (Bruce Lee's Game of Death), Dawna Lee Heising, Maria Olsen (Paranormal Activity 3), Julie Anne Prescott and Vida Ghaffari. The film comes from Dustin Ferguson (Amityville Clownhouse) and is about a rogue shark ruining the grand opening of a new beachside resort.
To celebrate the 10th year anniversary of J.J. Abram's Super 8 it has come to 4K Ultra HD for the first time. Released on 24th May this new release (also on Blu-ray) includes more than two hours of previously released bonus content.
Thunderbird Releasing have announced their spring/summer Digital line-up. On 31st May Elyse came out, this stars Anthony Hopkins as a psychiatrist trying to help a troubled woman after a catastrophic accident. Safe Inside is about two young lovers, Tom and Ana trapped at the estate of a man with a powerful and controlling mind, it stars Andrea Tivadar (Killing Eve) and Joanna Kulig (Cold War) and came out on 7th June. 14th June saw the release of Agony, a giallo inspired work about a New Yorker who travels to Tuscany to take care of her estranged mothers will. It features Asia Argento (Mother of Tears), Jonathan Caoette, Franco Nera (Django) and Rade Serbedzija (Eyes Wide Shut). Finally, on 28th June Tyger Tyger came out. Described as a 'deliriously energetic post-apocalyptic-style pandemic romance' it is about a trio who head out to distribute essential medication they have stolen from a pharmacy, they find themselves stuck at a lawless psychedelic city.
Finishing on some book news is Hounded,the first book in a three part thriller series that comes from author Ellie Douglas. This is zombie apocalypse with a difference, dogs are the ones who have transformed into the flesh hungry undead. This is out now and can be found on Amazon.
Posted by Daniel Simmonds at 14:03