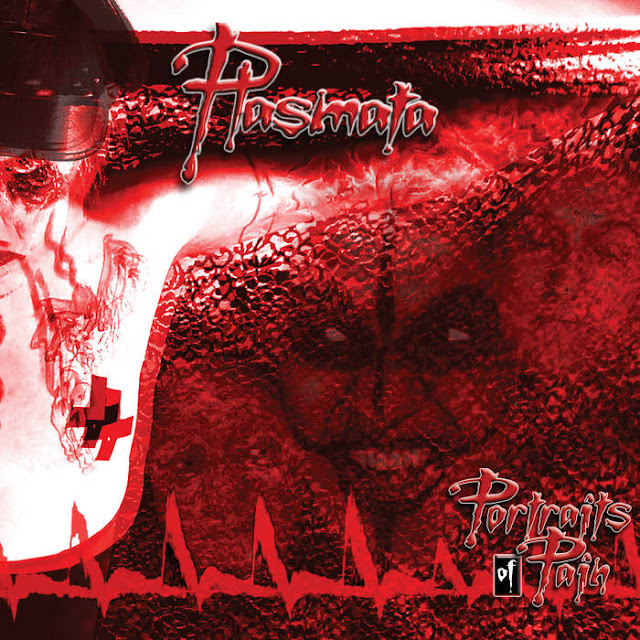 Whenever I decide to tackle a music review I feel obliged to first say I don't know much about music at all, so it is not something I am particularly good at writing about. With that out the way I have recently listened to Plasmata's new EP, Portraits of Pain. Plasmata are a Chicago based band, their bio describing them as 'a dramatic and electrifying fusion of hard-hitting alternative rock and dark electronica: part goth-industrial/electro-industrial, part Hollywood glam metal and L.A deathrock, all wrapped up in theatrical "Glampire" asthetics'. This new EP is comprised of five tracks over twenty one minutes and was produced by 'goth rock/deathrock legend' William Faith. This is the band's first release since frontman, Trent Jeffries suffered a lengthy illness in 2012, it was created during lockdown in the second half of 2020.

When it comes to music I never really branch out and listen to much new, I'm happy to listen to commercial pop off the radio as well as all the bands I enjoyed as a teenager. I did like Portraits of Pain though, having listened to it two or three times now I still enjoy it. It begins with Leviathan which is also the lead single off the EP. This had a good beat to it and was heavy sounding, and I found it a song that improves with each listen, gave me Therapy? vibes. Also, there are few things better than a well placed soundbite and here there was a great extract from Doug Bradley's Pinhead character from the Hellraiser films. Soundbites are something that appear in most the tracks on this EP.
Next up is The Vanishing, this was the track Jeffries first sent to Faith. This felt more slow rock (this style always reminds me of the Road Rash video game soundtrack), again with a good beat and featuring even more soundbites. There is a long monologue from Ben Kingsley's character in the film Sexy Beast that was quite entertaining to hear.

The third track is Ten Bells which is possibly about Jack the Ripper, elements of the music occasionally reminded me of Nine Inch Nails, but with more hard rock taken up much of the sound, and a nice little part with piano. Potentially this was a bit cheesy lyric wise but had perhaps the best music in the whole EP.
Penultimate track is The Enlightenment which appeared to be about the hypocrisy of consumerist religion. The format for this was one had the singer taken on a more slow measured pace, coming across like a evangelical preacher.
Final track is Death of Hope which at five and a half minutes is the longest track here with the lyrics not kicking in until after a minute has passed. I got a slight Depeche Mode/Marilyn Manson feel to this one. The slow pace made it more plodding than the others but its inclusion at the end was the perfect place for it to close out this EP.

I'm in an odd place as a blogger who reviews things as I like to jump in blind rather than do any kind of research. With films that means I try and avoid reading press releases or watching trailers of whatever I'm due to review, with music this means I don't even really know the genre. I was expecting something cheesy in a european sense, instead I found this was a good EP, I could see myself listening to this again in the future, I love a good beat and I love well used soundbites in music and Portraits of Pain have both in plentiful supply. Plasmata's Portraits of Pain is due to be released on 14th June. Check out the video for lead track Leviathan below.