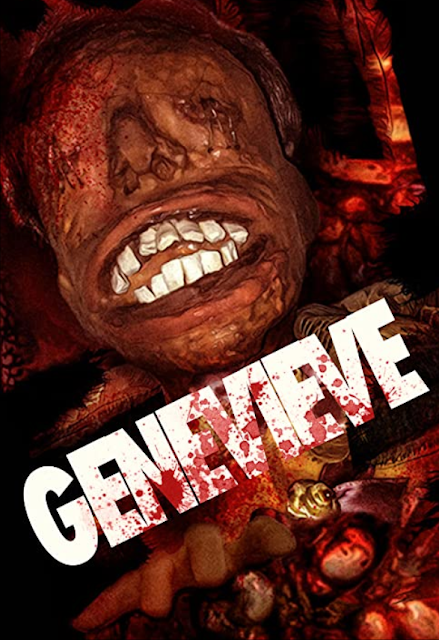 For the past year everything for director/writer/actor Nicholas Michael Jacobs has been Genevieve. This unique looking doll first appeared in his 2019 anthology film Urban Fears and subsequently went on to star in a series of short films over the past year that includes Genevieve, Genevieve Wrecks Havoc and Camo vs. Genevieve, as well as appearing in a segment in Two Twisted Tales. A comment I often had was how these all felt like they were going to lead up to something, they were all short enough to feel like steps along the way to something greater. That has resulted in a new film, Genevieve, which at forty five minutes in length is a vast increase in size over Jacobs' other short films which often came in at under five minutes.

To begin with this is literally more the same, the first part of the movie incorporates the three standalone Genevieve films of the past year as part of an anthology format. A writer (Jacobs) is trying to create a horror screenplay, his first attempt is shown on screen as the first two shorts from last year, which were about a thief (Jacobs again) attempting to steal the titular doll. His second attempt has a masked killer (also Jacobs) getting in a lethal battle with the doll. His third attempt is something new, the owner of the doll, the mysterious Ted Morris (yup, Jacobs), attempting to send his creation back to Hell via the use of a flesh bound book which I have to say was a very cool looking prop.
The whole idea of a struggling writer's ideas presented as mini films first popped up in the Sam Hooper (1998-2018) segment in last year's Tales from Six Feet Under anthology so it was interesting to see it reused here. Any worries this might invalidate all that has come before by revealing them to be works of fiction is rectified by the second part of the film that takes things in an interesting direction when the writer receives a knock at his door.

It was nice to get a new longer film from Jacobs, I enjoyed his bitesize creations but it did always leave me wanting more. He creates very indie horror films, but low budget doesn't mean low quality, there is a charm to these that is often lacking in much larger scale films. Maybe there is a little too much of the writer slowly wandering around his home in the dark but I still found myself enjoying this. The doll is as freaky looking as ever, and this time around its giggling and moans are provided in part by Alan Maxson who has appeared in such films as Godzilla: King of the Monsters and Blade: The Iron Cross. The doll's movements are very basic as ever but I wouldn't expect anything more by this point. For a mostly inanimate object it manages to have a lot of personality to it and it is good there is always a comedic element at work.

Whether this relatively feature length dive into the world of the twisted doll is a final swan song or if there are more to follow I don't know, but despite a cliff-hanger ending this felt like a fine farewell if it should turn out to be so. Jacobs has an indie style all of his own to his films, whatever comes next will be interesting to see. Genevieve releases on Vimeo on 13th August and can be pre-ordered here.